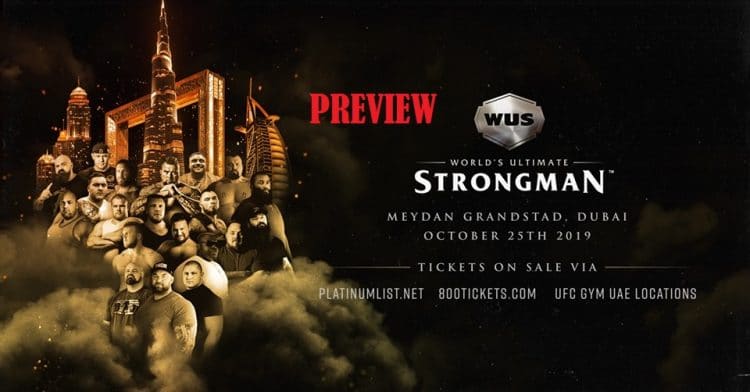 World’s Ultimate Strongman: Beast in the Middle East or as it’s known by its not that flattering abbreviation-WUS, is right around the corner so it’s the perfect timing to see who’s competing and who has the best chance of winning.

Unless Brian’s bad luck streak with injuries continues, he should be the clear cut winner here. He was the runner up last year at the inaugural event behind The Mountain who won every event he entered last year. If Shaw can’t get the “W” here, the event is pretty much wide open for Mateusz, The Polish Stone King, to win. Mateusz is gaining steam with every event he enters and pretty much wins the whole thing.

If he isn’t the winner, he gets placed third at worst and second at best, which is very impressive. However, his deadlift is still lagging a bit and it just so happens that the first event at WUS will be a max weight deadlift and there’s a lot of great Deadlifters at this year’s WUS, which includes my predicted winner-Brian Shaw.

Oleksii Novikov is also a name to look out for because he is competing regularly and is breathing down everyone’s neck each time he competes. In one of Marins Licis videos, he mentioned he competed 10 times in August. Novikov’s youth and activity could be just enough to place him in the top 3.

Everyone else is more or less a specialist. Jerry Pritchet, JF Carron, Belsak and Rauno Heinla are deadlift specialists with Carron and Pritchet being prime candidates for breaking Eddie Hall‘s deadlift record one day. Robert Oberst held the American log lift record until Rob Kearny beat it and Stoltman brothers are exceptional in Atlas stone runs.

It’s a stacked event and the battle for the first place should be interesting since last year’s and this year’s WSM winners(The Mountain and Martins Licis)are not competing. The two favorites are, as I already mentioned, Brian Shaw and Mateusz Kieliszkowski.

However, a lot of things could change after the deadlift event. Ever since Eddie Hall lifted the impossible 500kg the race to find the guy to lift 501 kg has been set and guys are getting injured quite often on these near half of tonne weights.  Ultimately WUS is here to stay and it has big plans for its future. Who wins and how to find out on October 25th.