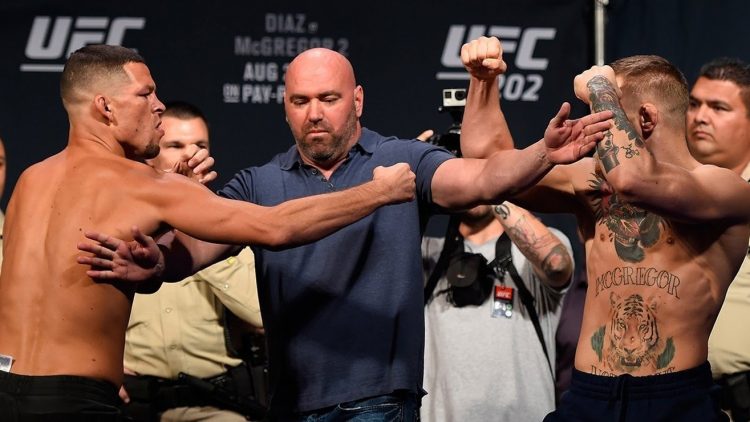 Floyd Mayweather may be deploying some mind games against Conor McGregor leading up to their showdown on Aug. 26. He could be accompanied to the ring for his upcoming mega fight with Conor McGregor by the Irishman’s fierce rival Nate Diaz.

The former five-weight world champion takes on the UFC superstar in a money-spinning showdown in Las Vegas on August 26.

The build up to the fight has been heated, with accusations of racism and homophobia marring a recent four-city publicity tour. McGregor promised to knock out the unbeaten Mayweather, who in turn taunted the Irishman for ‘tapping out’ against Diaz at UFC 196 in March 2016.

‘The Notorious’ avenged that defeat five months later but a member of Mayweather’s ‘Money Team’ has revealed that Diaz could join the 40-year-old on his walk to the ring at the T-Mobile Arena.

Jason Lee told TMZ: ‘I’m from Stockton, California, and I was just in London with Floyd when the whole sh** went down with Conor and I’m going to make a call to Nate Diaz.

‘I would love to see him walk out with Floyd. That would be awesome for the town.’

He added: ‘He’s from Stockton, we’re from Stockton, Stockton people are almost on the level of a Ferrari. We’re going to keep doing what it takes to stay relevant.’

It is not unusual for Mayweather to be surrounded by stars from sport and entertainment. Rapper 50 Cent used to be a regular member of his entourage and accompanied him to the ring for his clash with Victor Ortiz in 2011.

Pop star Justin Bieber, meanwhile, was alongside the 40-year-old ahead of his fights against Manny Pacquiao and Canelo Alvarez. But Lee hinted that the 23-year-old would not join ‘Money’ for his ring-walk this time round.

‘Bieber found Jesus and he’s somewhere prayed up,’ he said. ‘I don’t see Bieber walking out with Floyd.’