Kari Pearce, Brooke Wells, Haley Adams, and Katrin Davidsdottir are all thirsty for the big take to unseat Tia-Clair Toomey at the 2020 Reebok CrossFit Games. Who is most likely to win the Fittest Woman on Earth title? 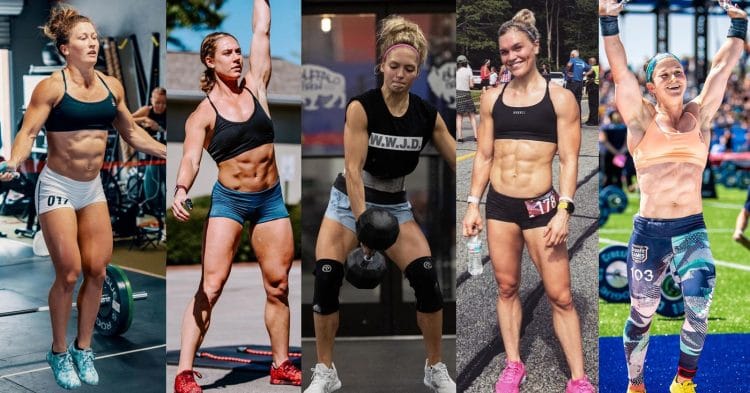 Can someone beat the seemingly unbeatable Tia-Clair Toomey? Of course, they can. Every champion worth their salt knows a loss is always possible. This time, Tia is going to have to do better than beating her personal best. There will be a wide range of events, some of which won’t be in Tia’s wheelhouse.

The four women with their eyes on taking the prize from 3-time winner Toomey are Brooke Wells, Kari Pearce, Haley Adams, and Katrin Davidsdottir.

Tia will be working to keep the title, and although she is the clear favorite, it’s not going to be an easy run for her. She has some younger blood working to quench their ache for a win, and some contenders like Katrin Davidsdottir that, after last year, have something to prove to the world.

Let’s have a look at them.

Kari is known for her crushing abs business that she works when she is not training to become the Fittest on Earth®. Her core will be a strength to her in this weekend’s games, but she’s also got 18 years of gymnastics training that will help her in events such as the Handstand Hold, a weakness for Toomey.

Kari is also hardly a newbie to the games, she’s a six-time Games contender. She may have come in fifth in Stage 1, but that could be just what she needs to make her hungry. She saw double-digit placements in the Friendly Fran and the Front Squat, but placed well above Toomey in the Handstand Hold with second place for that event.

She’ll work to get herself on the podium at least, but unseating Toomey has to be at the top of her game mindset right now.

She hasn’t beaten Toomey yet, but events with odd objects and gymnastics should give her the fighting chance.

4. Katrin Davidsdottir – Can a Champ Unseat a Champ?

If there is one woman that is the hungriest for this year’s win, my odds are on Davidsdottir for being the hungriest. She has something to prove to both herself and the world, after being taken out of last year’s games early due to injury.

If for no other reason, this year she wants to do better, but this two-time Fittest Woman on Earth® winner may well be Toomey’s biggest concern.

Even so, Davdisdottir has the cycling advantage, having beat Toomey previously. Davidsdottir doesn’t have the youth advantage and came 200 points behind Toomey in Stage 1.

It’s not unusual for youth to win at the Games, but for Haley Adams, it will be an unseating like no other. She’s only cracked the top 10 in the last year, so making it into the top 5 is already a new personal best for her.
Clearly the underdog, she could be the youngest winner in history. It is entirely possible that Toomey could be unseated by a teenager.

Youth is not something working against her, as she’s clearly made it this far. The closest any athlete has come is Annie Thorisdottir who made it to the podium in 2010 at the age of 20.

And Haley has already given Toomey a run for her money by coming in third in Stage 1. She’s a contender Toomey should be worried about. She had double-digit placements in the Damn Diane and Front Squat, but came in fourth in Nasty Nancy, Awful Annie, and beat Toomey in the Handstand Hold at fourth.

Haley Adams has a chance to make history, and that alone will make her hungry for it. She placed third to Toomey in Stage 1 of the 2020 Reebok CrossFit Games. The win is not entirely out of her reach.

She brings the mind-body advantage to the games, as a student of Tennessee Tech University where she is taking a human science and biology degree. The CrossFit Mayhem gym is just a few minutes away from that campus, and that marriage of mind and body connections is something that Adams takes advantage of, and does it well.

She’s not considered to be the most likely to unseat Toomey. But she’s got the grit and the determination to suggest that, anything can happen when a nineteen-year-old is third to a 3-time Fittest Woman on Earth® winner, and places ahead of two-time champ Davidsdottir in Stage 1 of 2020.

You can’t knock this woman. At 25 she’s in the top five Fittest on Earth® contenders, and although she’s got a consistency problem with winning.

Consistency is the most common problem she’s associated with. She wins. She doesn’t. Completely unpredictable.

Her stats in Stage 1 reflect this. She came in second overall to Toomey, but third in events such as Friendly Fran, Damn Diane, and Awful Annie.  But she was eight ranks above Toomey in the Handstand Hold, and placed in eighth there.

That’s also a strength for her. That means Brooke Wells can surprise anyone, even Toomey.

This will be Brooke’s sixth CrossFit Games, meaning she’s started training to become the Fittest Woman on Earth® since she was 19. She normally places in the Top 20 but has rounded that out to smaller numbers this year.

She’s already done that by hitting the Top 5 and has placed second to Toomey, showing she’s capable of an upset and hitting the number one spot.

No matter what happens, she’s likely to hit a new personal best this weekend, and it will be interesting to see where she places in handstand events, a strength for her, a weakness for Toomey.
But anything can happen. She’s certainly got eyes on the prize of becoming a three-time champ, and that’s always worth fighting for.

1. Tia-Clair Toomey – Has the Most to Prove

Tia-Clair Toomey is certainly the crowd favorite and the Games favorite, but she’s got the most to prove. Her loss will be greater than any loss that any of her opponents will take on, because she will fall the most down the ladder.

She comes to the Finals having placed first in the Friendly Fran, Awful Annie, and Damn Diane, but came well behind her opponents here in the Handstand Hold at sixteenth place. Not her strong suit.

The others only have upward mobility on their mind, while Tia can’t go any farther than the number one spot.
Her weaknesses in the games will be in any handstand events or odd objects events, where she has a tendency to place behind her competition.

Her mindset will mean everything. And that may well be her greatest strength.

Only time will tell. We will keep you posted.

Keone Pearson Will Sit Out 2020 Olympia: “I’m Dealing With a Few Mental Battles”