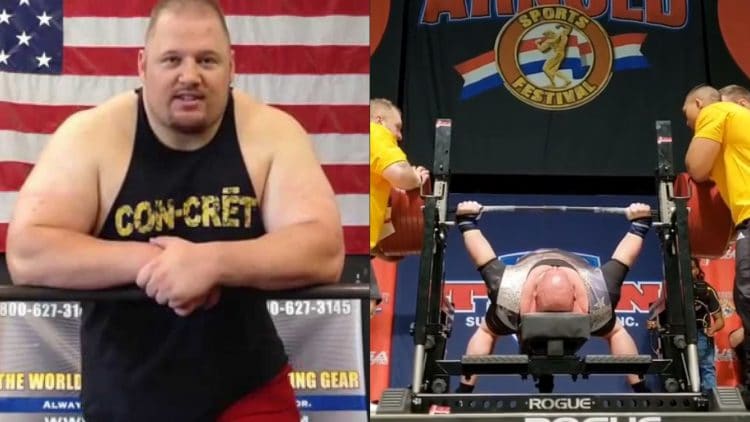 There was no shortage of amazing feats of strength at the 2019 Arnold Classic and Blaine “Vanilla Gorilla” Sumner was responsible for one of them. He bench pressed an Earth-shattering 1,003 pounds and what’s even crazier is he surpassed his previous world record performance by 88 pounds!

He opened up Pro bench event with a 937-pound bench press and blew away his previous record by 22 pounds with ease. Then he felt confident enough to jump straight into 1,003 pounds (Good idea Blaine) and killed it!

Now, Blaine Sumner has too many World records to count but he does hold the all-time IPF records for the equipped squat, bench press, single bench press, and totals among a long list of achievements and world records. He’s the first man in IPF history to bench over 1,000lbs in single ply gear and now has another impressive accolade to add to his lengthy resume.

For those who like a different view of the action…

He even got a pretty awesome piece of metal artwork to commemorate his record 1,003-pound bench press.

It wasn’t over for Sumner at the bench press though since he did attempt to compete in the Grand Prix which is a three-lift event. He hit a 225-pound squat (Easily) but was too torn up to continue another two attempts due to lingering back and hip issues. It’s still mind-blowing for him to be able to crank out a rep after a world-record bench press (It does sound crazy).

For the next lift in the Grand Prix, Sumner had another go at the bench press where he opened with 937lbs before failing at a second 1,003lb attempt. He had to dump the weight due to being pretty hurt from the stress on his body and limbs.

The final lift was the deadlift where he completed 717lbs and 761lbs but could bare no more beyond that. Sumner finished with a 2,723 total which he explained is “the 3rd highest in an IPF affiliate after both of my 2,800+ totals”. So, all-in-all, he had a pretty good Grand Prix performance as well.

Apparently, his wife was competing at the Arnold as well and he thanked her in his post for being his biggest support throughout the entire process.

Congratulations to a true World champion Blaine Sumner for his amazing accomplishments!

Powerlifting is one of the most exciting sports in the world, full of a variety of interesting athletes. Today we...