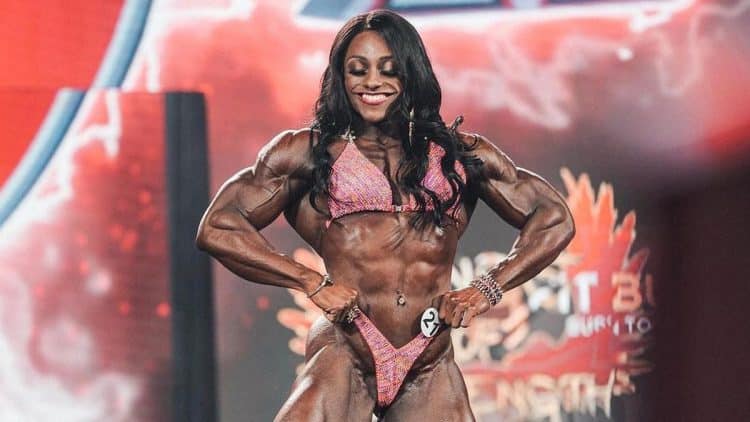 2022 Joe Weider’s Olympia Fitness & Performance Weekend, scheduled between Dec. 15-18 in Las Vegas, NV, hosted the 39th edition of the Ms. Olmypia contest. It was the third year since the Women’s Open bodybuilding division made a comeback at the Super Bowl of bodybuilding. Interestingly, all three editions faced the same fate. Andrea Shaw dominated the roster to pick up the trophy each year.

21 Women’s Open bodybuilding competitors staked their claim for the throne at the 2022 Olympia. However, none could stop Shaw from doing a three-peat.

Helle Trevino and Margie Martin were the biggest threats to Shaw’s Ms. Olympia crown heading into the show. Plus, Yeo put in her contention with her name in the final callout, but the reigning champ closed the door on them in the posing round.

Shaw was into gymnastics and competitive cheerleading. However, she switched to bodybuilding after she felt burned out doing athletics. The Michigan native started lifting weights at the age of 15, and there has been no looking back ever since.

Unknown to many, Shaw has previously competed in the Figure and Physique divisions and only switched to the Open division in 2019 at the Toronto Pro Supershow; the rest, as they say, is history.

On Nov. 5, 2022, Shaw completed her three-peat at the IFBB Rising Phoenix Arizona Pro — the second most-prestigious Women’s Open bodybuilding show after the Olympia — and entered the 58th edition of the Super Bowl of bodybuilding with the same intention.

Martin finished fourth at the Super Bowl of bodybuilding. At the 2022 Olympia presser, Martin announced that she would be retiring from competitive bodybuilding after this year’s Olympia, making this her last contest.

This was Trevino’s seventh Olympia appearance. She is a two-time Rising Pheonix champion. Trevino went through a major shoulder surgery at the beginning of 2022. However, she left no stone unturned to return to the Olympia stage and at the top of the lineup. Trevino had placed second at the 2021 Olympia, while Martin had finished in third place.

Yeo nailed her individual posing routine and conditioning to pick the runner-up place on her debut. She qualified for the 2022 Olympia by winning the 2022 Chicago Pro.

Given below are the complete results: