Life and accomplishments of Andrea Shaw. 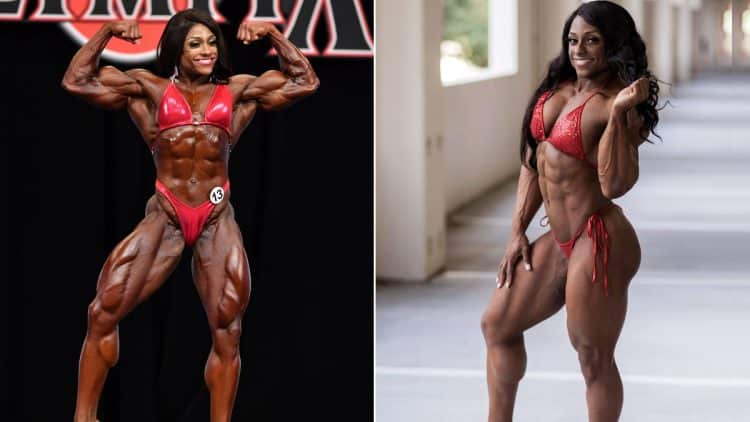 Andrea Shaw is an American professional bodybuilder and an IFBB Pro athlete competing in the Women’s Bodybuilding division. Shaw has two Ms. Olympia (2020, 2021) and three Ms. Rising Phoenix title wins (2020, 2021, 2022)—the second-biggest female bodybuilding title—under her belt. This is her complete profile, biography, and more.

Andrea Shaw was born in Detroit, Michigan. Growing up, she was into gymnastics and competitive cheerleading. She believes that being athletic benefitted her both physically and mentally. In middle school, she learned to make her own structures even though her school didn’t offer adequate equipment or many organized sports.

However, she felt burned out from gymnastics and cheerleading. Although Shaw was on the verge of giving up athletics, there was no way athletics was giving up on Shaw.

The Ms. Olympia’s mother is a nurse and a former personal trainer. She encouraged Shaw to get back into athletics and pushed her to start working out at Powerhouse Gym in Highland Park, Michigan. Even after winning two Ms. Olympia and Rising Pheonix titles, Shaw still works out at the same gym.

Shaw started training by herself in the gym at the age of 15. After Shaw turned 17, her mother’s training partner—a female competitive bodybuilder, started guiding her.

Andrea Shaw has previously revealed that she never intended to become a professional bodybuilder but wanted to be a fashion model. However, her five-foot-five structure put her at a disadvantage.

“I had no desire to be a bodybuilder back then. I wanted to be a fashion model, but at 5’5”, I wasn’t tall enough.

Much to Shaw’s surprise, her training advisor told her mom that she didn’t think Andrea had the heart to stick with training in the long term. This fueled the fire inside her, and she resolved to go full throttle every time she stepped inside the gym.

One day while training at the Powerhouse Gym, Shaw came across an issue of Oxygen Magazine. Looking at the chiseled athletes in the magazine, Andrea decided that she wanted to pursue a career in the bodybuilding industry.

As the Ms. Olympia champ picked up her training intensity, she started building muscle mass and conditioning, making people around her ask her if she was a competitive bodybuilder, and if not, why? It was the cue Shaw had been waiting for.

While Shaw didn’t think she packed on enough size to compete in the Open bodybuilding division, she developed a liking for the Women’s Figure division and decided to compete in it.

In 2008, she entered two figure competitions, placing third and fourth, but she didn’t feel she was on the right path. She then decided to take some time off from competitive bodybuilding, which ultimately turned out to be eight long years.

During her time off, Shaw earned a BA in exercise and sports science while continuing to fine-tune her training. However, it didn’t all go down as planned. Shaw ended up gaining 20 pounds in college.

After completing her BA, Shaw continued her bodybuilding studies. She interned at the Detroit Medical Center, working in the physical therapy department at Beaumont, and received her group training and personal training certificates.

After an eight-year sabbatical, Shaw decided to return to competitive bodybuilding and signed up for her first show but as a Women’s Physique competitor this time. Her comeback show was the 2016 John Simmons Championships, where she finished fourth.

Shaw entered five competitions in 2018 and earned her pro card by finishing second at the 2018 NPC Nationals.

Although Shaw had earned a podium finish in most of the Women’s Physique shows she had competed in from 2016 to 2019, she felt something was amiss.

Switching to the Women’s Bodybuilding Division

After competing in the Women’s Physique division at the 2019 Toronto Pro Supershow—where she placed eleventh—Shaw realized she was too muscular for the physique and figure divisions and was being marked down for it.

Shaw spoke to one of the judges and female bodybuilders Irene Andersen, Margaret Marvelous, Lenda Murray, and Alina Popa, about the issue. All these people told her she looked more like a bodybuilder than a physique competitor.

Her discussions with fellow bodybuilders and judges pushed her to make a second divisional switch. After the 2019 Toronto Pro Supershow, Shaw switched from the Women’s Physique division to the Women’s Bodybuilding division, and the rest, as they say, is history.

Furthermore, she revealed that she now diets for maximum hardness and definition without fear of going “too far” for the judges. She believes that switching to the bodybuilding division has broken her shackles.

“My legs, in particular, were just too big. I tried over time to make them smaller, but nothing worked. Getting into bodybuilding [division] allowed me to create a better balance by further developing my upper body rather than reducing my legs.”

Related: Top 18 Girls with the Biggest Biceps in the World

After switching to the Women’s Bodybuilding division, things immediately started falling in place for Andrea Shaw. She has competed in seven bodybuilding contests after making the switch from the Women’s Physique show and has won five of them.

Shaw placed runner-up in her debut Women’s Bodybuilding division and seventh in her second show. However, she has dominated every contest ever since. It’d be safe to say that she is a force to be reckoned with in the women’s bodybuilding circuit.

Shaw qualified for her first Olympia weekend by winning the 2020 IFBB Omaha Pro. Plus, she became the frontrunner to win the Ms. Olympia title after she won the Wings of Strength Rising Phoenix title.

Shaw had momentum behind her as she entered the 2020 Olympia, which helped her secure her first Ms. Olympia title in her rookie year at the show. Andrea Shaw won her second Rising Phoenix and Ms. Olympia titles in 2021.

Given below is Ms. Olympia’s complete competition history:

Andrea Shaw is coached by her longtime boyfriend, John Simmons, and trains at Powerhouse Gym in Highland Park, Michigan. She has progressed from working out three days a week to training every day. Shaw spends eight to 14 hours working out weekly.

The Michigan native eats five to six small meals throughout the day. She ensures she is having 30-50 grams of protein with each meal so that she has enough nutrients to help repair and rebuild muscle.

Shaw likes to eat carbs half an hour before working out. It gives her enough energy to last her throughout the training session. She meets her daily fat goals by eating at least five servings of fruits and vegetables.

Although Shaw sticks to eating clean throughout the week, she has a cheat meal to celebrate a successful week.

Given below is Shaw’s off-season diet plan:

Shaw relies on the following supplements to build muscle mass and help maintain her overall health:

Besides arguably being the most dominating female bodybuilder in the current circuit, Shaw is one of the most genuine and humble individuals. Her stage presence and interviews are a treat to watch.

At the time of this article’s publication, Shaw has not competed in any bodybuilding show in 2022. However, she will the crowd favorite to win the Ms. Olympia title going into the Olympia Weekend, scheduled for Dec. 15-18, 2022, in Las Vegas, NV.

How To Do The Otis Up – Muscles Worked, Benefits, and Alternatives

The 2022 Ms. Olympia contest has arrived, and Women's Bodybuilding took over Las Vegas, Nevada for prejudging on Friday, December...