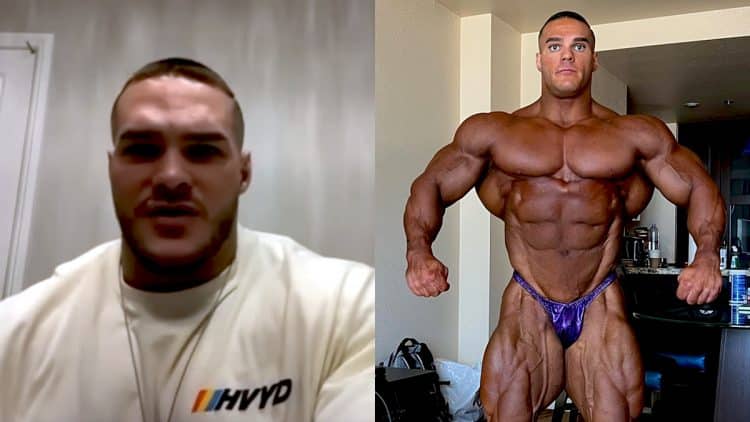 Bodybuilder Nick Walker capped off an incredible year with a third-place finish at the 2022 Mr. Olympia, held Dec. 16-17 in Las Vegas, Nevada. In a recent episode of Mutant & The Mouth on YouTube, Walker shared his thoughts on the competition.

Men’s Open standout Nick Walker rose to prominence in 2021 with one of the best rookie seasons ever. He started the year off with a stunning showing at the New York Pro and handily won the contest. He followed up with another commanding performance at the Arnold Classic. His final appearance came at the Olympia, where he finished fifth in his debut.

The rivalry between Walker and Hunter Labrada, son of legendary bodybuilder Lee Labrada, became one of the main talking points going into the 2022 Mr. Olympia as many believed Labrada did not do enough to finish ahead of Walker in the previous edition.

Former 212 Olympia champion Derek Lunsford proved to be the wild card on stage. He chose not to defend his title and competed in the Open division for the first time at the show. Rising contender Andrew Jacked made waves in the sport this year and emerged as a promising prospect after winning the 2022 Arnold Classic and the 2022 Texas Pro.

In the end, the ever-consistent Hadi Choopan won the 2022 Mr. Olympia. Lunsford shocked the world with a runner-up finish while Walker managed to crack the top three for the first time in his career and also won the People’s Champ award. Two-time Mr. Olympia winner Mamdouh ‘Big Ramy’ Elssbiay dropped down to the fifth spot due to a lackluster appearance.

Nick Walker says he could’ve been second at the 2022 Mr. Olympia

In a recent episode of Mutant & The Mouth on YouTube, Nick Walker shared his thoughts on the result of 2022 Mr. Olympia. He believes the top three competitors will continue to battle it out for years to come.

“I’m very happy I took third. But I think as an overall package, I think I could have been second. Me, Derek, and Hadi will probably be battling this out for years unless Samson comes out of the woodwork or if Andrew nails it one time. I do believe us three will be there for quite some time.”

Walker shared his thoughts on the competition

‘The Mutant’ had the opportunity to see the competition up close at the event; both on and backstage. He heaped praises on Samson Dauda and Andrew Jacked for their impressive performances.

“I arguably could have probably had Samson beating Ramy to be honest. Samson’s a freak. I’m definitely excited to see what he can do at the Arnold, what he can do at the next year’s Olympia. My personal opinion of Samson, I think he should sit out the Arnold and focus on making more improvements for the Olympia. He could cause a lot of havoc. His only downfall was he wasn’t conditioned enough.”

“Andrew made us look like amateurs. When this man was just chilling in his little Speedo, just relaxing, you’re just like what the f**k is that? He is one of the nicest guys.”

Walker gave his take on the underwhelming showing of Iain Valliere, who looked visibly off and fell out of the top ten this year.

“One of my surprises, which I’m sure he wont want me to say which is going to be a letdown was Iain. I know how hard he had worked and how bad he wants this. When you work so hard for a whole year to come in ready to destroy and the peak doesn’t go as proper and then you show up on stage, I felt horrible. It was heartbreaking. I felt really bad.

“Seeing how his quads looked like in the off-season and how in shape they were even then versus on stage, I don’t want to say they lost size but maybe they just weren’t full enough.”

Following the 2022 Mr. Olympia, renowned bodybuilding coach Milos Sarcev fired shots at Nick Walker for placing third. Sarcev argued that his client Samson Dauda brought a better package and went as far as to say that there was no way Nick should have beaten Dauda.

Walker, a former Arnold Classic champion, will not return for the upcoming 2023 Arnold Sports Festival. He will look to make improvements in the off-season with his focus on challenging for the next Olympia.