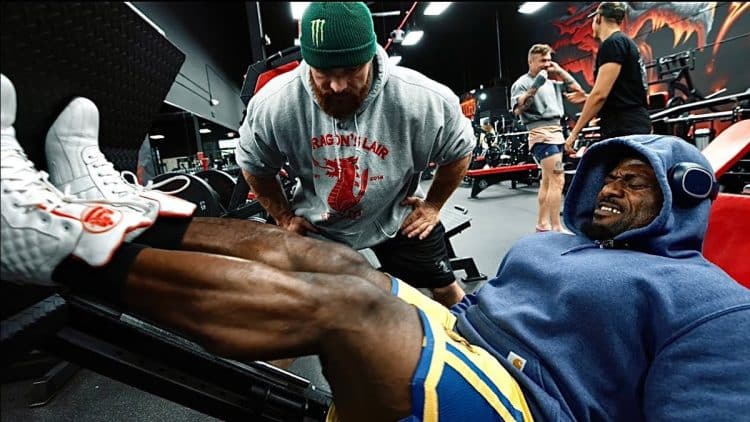 Andrew Jacked is on a quest to realize his Mr. Olympia dream in the first year of his pro bodybuilding career. The Nigerian bodybuilder earned his IFBB Pro card by dominating his competition at the 2022 Arnold Classic Amateur. He instantly became the talk of the town because of his massive frame and incredibly aesthetic physique. By winning his pro debut at the 2022 Texas Pro, the hulking Nigerian secured a direct qualification to the 2022 Olympia. Veteran bodybuilders like Chris Cormier and Flex Wheeler feel that Jacked can be a real threat in the Open division, especially if reigning champion Mamdouh ‘Big Ramy’ Elssbiay leaves the door open.

Jacked is going through his 2022 Olympia prep with a massive burden of expectations and hype. To push his limits, Andrew has been training with bodybuilding veterans like Roelly Winklaar. Andrew trained with seven-time 212 Olympia winner Flex Lewis for a quad-day workout this past week.

The retired bodybuilder’s total domination in the 212 division gave rise to speculations about his prospects in the Open division. However, Lewis laid it to rest by issuing a retirement statement earlier this year. However, he remains active in the gym and keeps himself busy with interesting endeavors like the famous Dragon’s Lair gym and a podcast. He is planning to do something ‘with Olympia as the end goal’ but has revealed the exact nature of this endeavor.

Jacked went through the training session under Lewis’s guidance at the Dragon’s Lair Gym in Las Vegas, NV, and posted the video on his YouTube channel. So without further delay, let’s see how Lewis pushed the Mr. Olympia prospect through this intense quad training session.

Lewis guided Jacked to start the leg workout with this quad isolation movement. Leg extensions are also a great warm-up exercise for the knees. Therefore it makes for an excellent exercise to perform at the start of leg training sessions. While it is a great movement to gain muscle and strength, it is advisable to do sufficient warm-up sets and take necessary care to avoid knee damage. Not locking out the knees completely helps with this as well. Jacked did a few sets of this movement to pump blood into his legs.

Leg press served as the first heavy compound exercise of the day. Lewis had Jacked do this exercise with different foot placements for targeting different parts of the quads. Jacked did the first warm-up set with his legs at the bottom of the platform for more focus on the quads and feet slightly pointing outwards. For the next set, he started with the same foot placement and did a few reps.

Lewis then instructed him to place his feet in a narrow stance for the set’s second half. Before winding up the set, the 2022 Texas Pro winner did a couple of explosive reps with a slow eccentric movement. Lewis increased the weight for the working sets and pushed Jacked to finish the high-volume sets with different foot placements.

The seven-time 212 Olympia winner took Jacked through this compound movement next. Hack squats are a great way to work the quadriceps without excessive spinal compression. Additionally, they work the glutes and hamstrings but to a lesser extent. The 2022 Texas Pro champ got a few sets of this movement under his belt and took to a basic bodyweight movement next.

The Nigerian bodybuilder took to the walking lunge next to stimulate the quads further. Jacked performed this exercise as Lewis observed and gave him constructive feedback on his form and range of motion.

Jacked wrapped up the training session with some sets of this exercise to work his quads and glutes.

The 2022 Olympia will take place from Dec. 15 to 18 in Las Vegas, NV. The Open division has the deepest talent pool; Jacked and other newcomers like Krizo and Blessing Awodibu have a lot of intrigue surrounding their performances. However, Andrew’s performance in his pro debut proves that he is capable of climbing the rankings. All that remains is the 28-day period until the Olympia weekend kicks off on Dec. 15.

You can watch the entire workout video below, courtesy of Andrew Jacked YouTube channel: