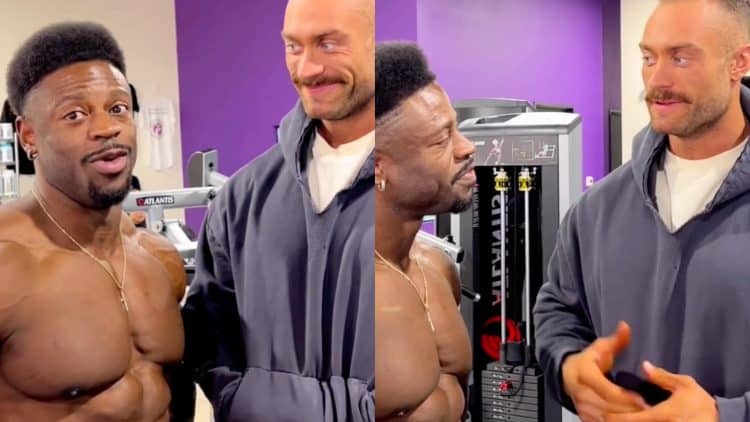 Canadian bodybuilder Chris Bumstead created history this past weekend with another win in the Classic Physique division at the 2022 Mr. Olympia, held Dec. 15-18 at Planet Hollywood Resort & Casino in Las Vegas, Nevada. In a recent Instagram post, Bumstead and fellow standout Breon Ansley shared a heartfelt moment together to conclude their six-year-long rivalry on stage.

Breon Ansley set the gold standard for Classic Physique competitors in 2017 when he became the Mr. Olympia champion. He defended his title successfully in 2018 when he warded off ‘CBum’ and managed to become a two-time winner at the most prestigious fitness showcase in the world.

After getting two consecutive runner-up finishes, Chris Bumstead would finally dethrone Ansley to win his first Sandow at the 2019 Olympia. Bumstead proved himselff again and again in 2020 and 2021. Meanwhile, Ansley dropped down to third place in 2020 and in 2021.

The rivalry between Ansley and Bumstead only intensified ahead of this year’s edition. Bumstead entered the Olympia contest as the favorite but he was tasked with fending off rising sensations Ramon Rocha Queiroz and Urs Kalecinski. Ansley was determined to reclaim the title and tie ‘CBum’ for most Classic Physique Olympia titles.

During the build-up to the show, Ansley revealed that it would be his final appearance as a Classic Physique competitor at the Olympia as he targeted a move up to the Men’s 212 division. He explained the weight cap was restricting his growth and that he would follow through with his plans even if he had managed to beat ‘CBum’ over last weekend.

In a recent Instagram post, Chris Bumstead and Breon Ansley shared a heartfelt moment together to conclude their six-year-long rivalry on stage.

Ansley: “The champ is here and I just want to let him know that it’s been an honor and a pleasure to battle it out with you for six years. I was hoping to tie it up but it didn’t happen. He is just that much powerful and champ-like. Well deserved, it was well done. It was the last year for us because I’m moving my talents up a class because of how difficult it is to get to this weight class.

But nevertheless, you have been a marquee ambassador for the sport worldwide. You’ve done so much for us in the Classic. I appreciate it. We all piggybacked off of you being such an ambassador and great representator of it. Just want to say champ, I appreciate it.”

CBum: “This man started it right here. I wasn’t Chris Bumstead. I wasn’t chasing any titles. I was just there and trying to beat Breon. My drive at the beginning was beating Breon. I don’t think people understand that because people are like, ‘do they hate each other? Do they like each other? Are they friends or not?’ The competitive nature of what we do is something you can’t explain until you feel it. We got intense sometimes but we knew we were coming for each other.

I appreciate you and I’m so happy that we were together last year. We had that moment on stage. Love you, thank you! It is a love of honor on what you have built. Here’s the torch for me to come in there and now you’re stepping off but I appreciate you. Thank you for all the battles!”

With four Classic Physique titles under his control, Chris Bumstead stands as the leading athlete in the division’s history at the Olympia. His motivation has not wavered as he declared his quest for a fifth Sandow trophy right after getting the fourth at the 2022 Mr. Olympia.