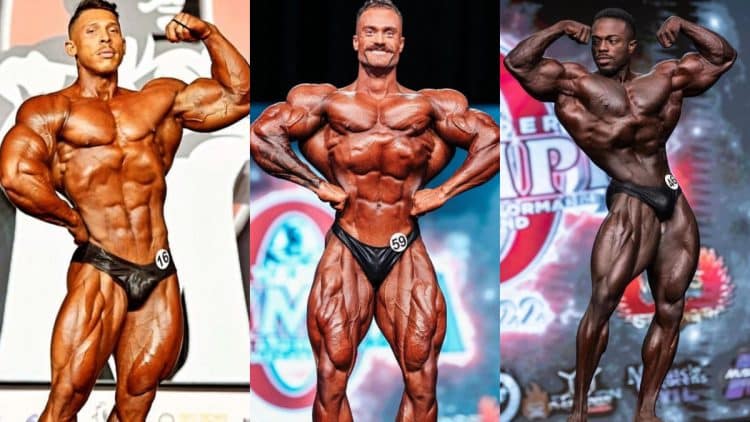 Former Mr. Olympia champion Samir Bannout has cemented his status as an analyst after moving on from competing. In episode 26 of The Muscle Maturity podcast, Bannout joined Nick Trigili and John Hansen to discuss the weight controversy in the Classic Physique division after the 2022 Mr. Olympia concluded.

Canadian bodybuilder Chris Bumstead went into the Olympia contest looking to extend his reign at the top. He edged out former two-time champion Breon Ansley in 2019 to take the Classic Physique title. He also won the title in 2020 and 2021. He secured the fourth Olympia win of his career this past weekend at the 2022 Mr. Olympia.

Bumstead faced intense competition from Brazilian sensation Ramon Rocha Queiroz, who many believed would pose the biggest challenge for ‘CBum.’ During the build-up to the show, Bannout argued that Ramon Dino had better arms than Bumstead and backed him to potentially come out on top. However, Ramon finished runner-up behind the Bumstead in the end.

Rising prospect Urs Kalecinski turned heads at the most prestigious fitness showcase with his stellar conditioning and detailed muscularity. While many were in agreement about his impressive look from the front, there was room for improvement in other areas like the back. He secured third place.

Former winner Ansley landed on the fourth spot in his final showing in the Classic Physique category at the Olympia. He intends to switch to the Men’s 212 division after the performance.

In episode 26 of The Muscle Maturity podcast, Bannout joined Nick Trigili and John Hansen to discuss the weight controversy in the Classic Physique class after 2022 Mr. Olympia.

“He brought the best package. He was shredded and again, he’s masterful. Ramon, beautiful body but he’s still not in control enough,” said Bannout. “So that’s why Bumstead had the edge. He has a lot of experience. When you hit every pose it seemed like Bumstead hit it right on the nail, right on the money. Ramon somewhat was not sure 100 percent of himself but it was beautiful. I’m disappointed that Breon didn’t make the top three. I’m honestly disappointed.”

According to Bannout, Ramon Dino will be more dangerous in the coming years if he works on his stage presence like Chris Bumstead.

“It’s very hard to be a champion like him if you go have that attitude. Ramon needs to be a little more powerful. I think Ramon in the future will probably be more dangerous too. Ramon had an issue before on the scales during the weigh-in. He wasn’t right on the money, something wasn’t right. He was heavily stressed out to the point he was quiet and sad. But somehow they managed to do it and that’s the stress you don’t need at the last minute.

“He can’t beat CBum right now but he has the body. He just needs to put a little more beef in the back. His arms are already winner, legs are great, waist is small, he needs more control on the stage and a little bit more beef on the back. He could do it.”

Bannout believes Chris Bumstead may have an unfair advantage

Bannout does not like the fact that each athlete must make weight in accordance with their height in the Classic Physique division. He and Trigili discussed the unfair advantage Chris Bumstead might have due to the extra weight.

Bannout: “They said he was shorter. I mean you measured him last year he was a little bit later. Kind of crazy. I’m very confused what’s going on over there.”

Bannout expressed his appreciation for Terrence Ruffin‘s incredible muscle quality but suggested that he did not bring his best package this time.

“He wasn’t as good as he was last year. He wasn’t as dry. He needs to be sharp because he’s not huge. He looked a little blurry, not as dry. I’m used to seeing him in 24 karat quality now he’s probably dropped to 21. You’re still very good but that would help him a lot because he’s not a freaky massive guy.”

As for Urs Kalecinski, Bannout believes he needs to add more muscle size to his arms and back to get in the mix of title contention.

“He needs another inch and a half or so on his arms. He’s got a beautiful body and he posed pretty good. His arms were hurting him. He looked harder for me backstage I don’t know what if it was the lighting on stage or what. He looked very impressive. He just needs to do something about his arms.”

Going into the 2022 Mr. Olympia, Breon Ansley was set to mark his final appearance in the Classic Physique division as he planned a move in favor of the Men’s 212 category. Bannout is excited for Ansley to make the transition and believes Ansley will look even better with the higher-weight cap.

“I think he should go to 212 after that. That’s where he belongs. He’s a 200 pounder. He could easily be even 205 or 206 same size. He’s really good. It’s a shame. But I have him no less than third and I think somebody cheated him a little bit.

“Breon at 200 pounds would be incredible because he’s not missing much. But when you lose 12 pounds of muscle in a month trying to make weight, it happens. He could’ve easily been in the top three. He’d be unbelievable at 205 or 206. He’s not 180 pounder he is definitely 20 more pounds of beef on him. He loses a lot of muscle making weight.”

It should be noted that Ramon’s coach informed fans and followers that he initially missed weight for Classic Physique ahead of his clash with Bumstead on the 2022 O stage. He ended up having to lose four pounds in order to be eligible to compete and at the time, it put his spot on the stage in jeopardy.

There were talks about whether the 2022 Mr. Olympia would be the last show for ‘CBum.’ Following his fourth Olympia win, Chris Bumstead made it clear that he has no plans to slow down anytime soon and declared his hunt for the fourth trophy.