No Result
View All Result
Tools
Fact Checked
Fact Checked
This article was written by one of our qualified writers, and fact-checked by our experts. The numbers in parentheses (e.g. 1, 2, 3, etc.) throughout the article, are reference links to peer-reviewed studies.
Our team of experts include a board-certified physician, nutritionists, dietitians, certified personal trainers, strength training experts, and exercise specialists.
Read Our Editorial Process

Find the average deadlift one-rep max for your weight, gender, and experience, and find out how you stack up against your peers. 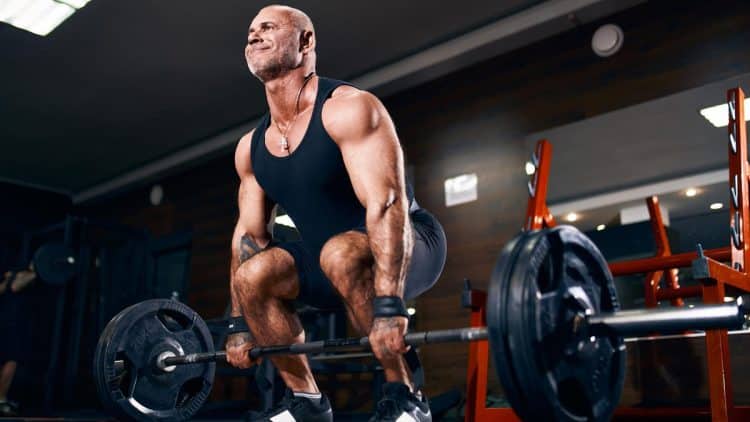 The deadlift is one of the three powerlifting exercises, along with the squat and bench press, and involves lifting weights off the floor to the hip level and then returning the bar to the ground.

It is a compound lift that works almost every muscle in your body. Plus, there is something inherently badass about lifting heavy stuff off the floor and putting it back.

Since the deadlift is a functional movement, most people have a hard time performing the lift. It is also a difficult movement to master, especially for beginners.

Performing the lift with an incorrect form can put unnecessary tension on your lower back and hamstrings, which are particularly prone to injury. We’d go as far as to say that the highest number of injuries in the gym happen while performing the deadlift.

Most deadlifting injuries occur when a lifter tries to bite off more than they can chew, resulting in them staying out of the weight room for weeks.

Don’t get us wrong. We aren’t trying to scare you away from this beautiful lift. Instead, this is a call to spend time improving your exercise fundamentals to ensure longevity.

In this article, you’ll learn about the average deadlift by gender, weight, and experience level, how to perform the deadlift with the correct form, and get better at the lift.

Factors like your body weight, experience level, and gender can have a role in determining how much weight you can pull off the ground.

The tables below will help you find how you stack up against lifters at your level. The numbers below represent the one-rep max (1RM) for people at different experience levels and weight classes.

Note: Don’t attempt these lifts without prior practice and warming up.

How much can the average man deadlift? 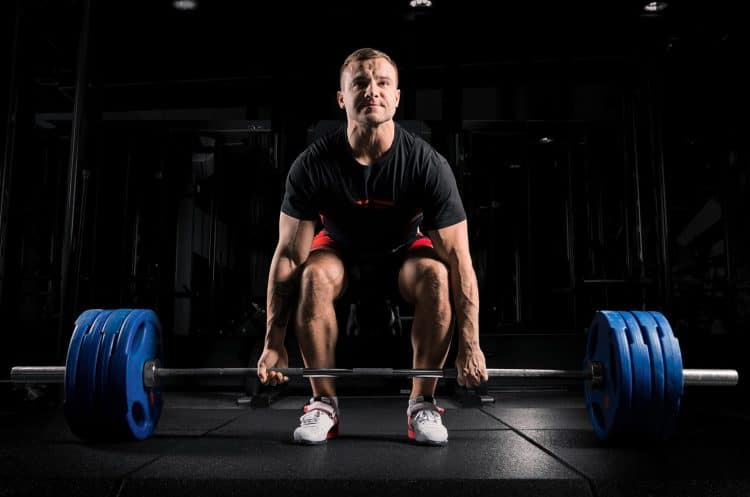 The average male deadlift depends on several factors, including a lifter’s age, weight, and experience level.

Below is the Male Deadlift Standards chart from Symmetric Strength:

The data shows that world-class athletes can pull four times more than folks who do not lift. At the same time, intermediate lifters can deadlift twice as much as their untrained peers.

How much can the average woman deadlift? 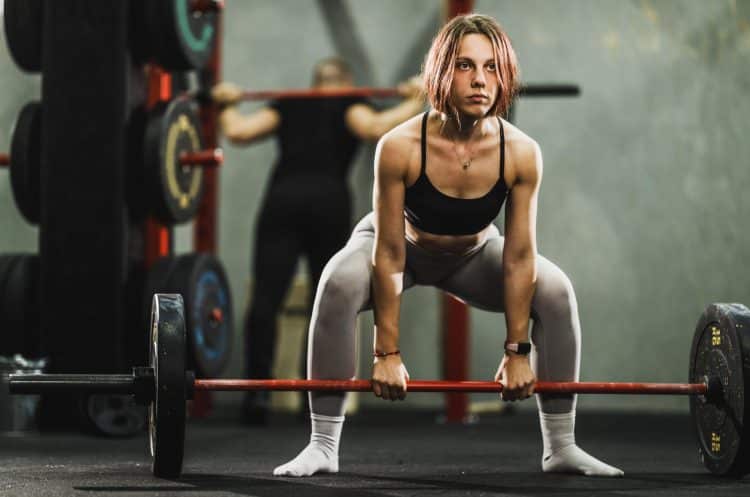 Women’s deadlift performance, too, is linked to their weight, age, and experience level.

Below is the Female Deadlift Standards chart from Symmetric Strength:

The data reveals that, like their male peers, world-class female athletes can deadlift more than four-time compared to their non-exercising counterparts.

Here is what the overall average deadlift weight for males and females looks like: 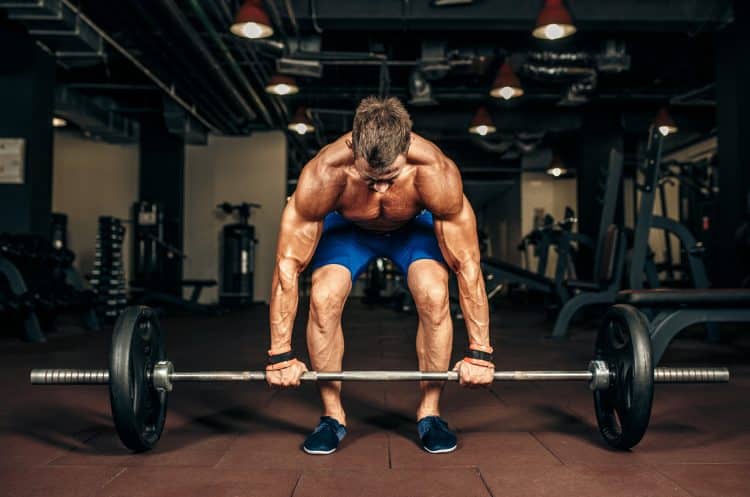 Per the Centers for Disease Control and Prevention’s National Center for Health Statistics (CDC), an average American male weighs 197.8 pounds, meaning an average man who doesn’t lift can deadlift 165 pounds or 245 pounds for a rookie lifter. [1]

Wondering how this compares to world-class athletes?

Returning to the data by Symmetric Strength, the average deadlift for an American intermediate lifter is 330 pounds, 410 pounds for proficient, 480 pounds for advanced, 550 pounds for exceptional, 615 pounds for elite, and 685 pounds for world-class athletes. 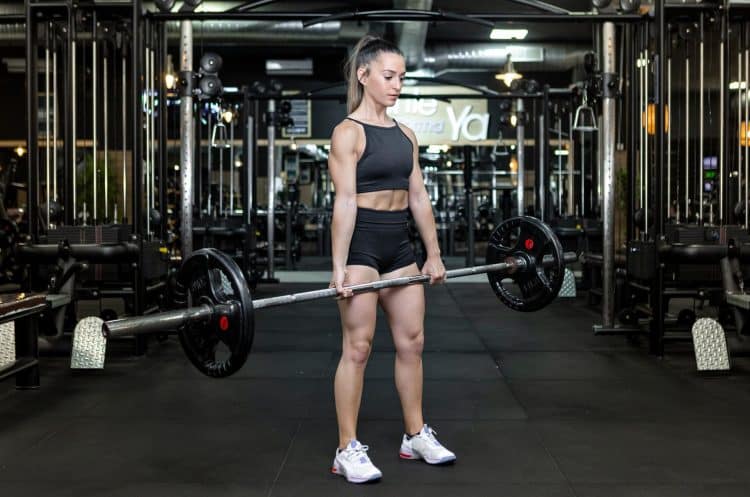 Per the CDC data, an average American female tips the scales at 170.5 pounds. As per the table from Symmetric Strength, a 165-pound woman (closest to 170.5 pounds) with no lifting experience can deadlift 115 pounds or 175 for a novice.

Deadlifting with the correct form comes with a learning curve. Like other things in life, regular practice is one of the most effective ways of getting better at exercise. Here is how to deadlift to get the most out of the lift:

Check out our barbell deadlift guide to learn how to perform the exercise for achieving muscle hypertrophy.

How to Improve Your Deadlift

Since the deadlift has several moving parts, making tiny adjustments can deliver drastic results. Use the following techniques to get the best bang for your buck:

Related: 10 Ways to Boost Your Deadlift

What should be your foot position while deadlifting?

Foot positioning while deadlifting has always been a controversial topic. While many believe your feet should be parallel while performing the lift, others believe that pointing them slightly outwards can improve your performance.

However, foot position will depend on your mobility and natural stance. You should perform the exercise in a foot stance that feels more natural and comfortable to you.

How to get better at the deadlift?

To get better at the compound exercise and improve your average deadlift, you should perform it at least twice a week. Training secondary muscles like the back, hams, and glutes will also go a long way in getting better at the deadlift.

Plus, if you think you’re weak at lockout, you should incorporate rack pulls, RDLs, and pulls against chains or bands to build strength at the top half of the movement. On the other hand, the deficit deadlift is a great option for developing explosive power in the bottom half of the lift.

The deadlift is a fundamental lift that should be a part of every lifter’s training arsenal, whether novice or elite. You’d be leaving gains on the table by skipping this exercise.

While the tables above should give you a good idea of how you stack up against your more experienced peers in the same weight class, you shouldn’t jump the gun trying to catch up with them. Get to the deadlift platform, burn the midnight oil, and results will follow. Best of luck!