We turn back the clock to Bikini Olympia's origins and honor the ten women who have since won the crown. 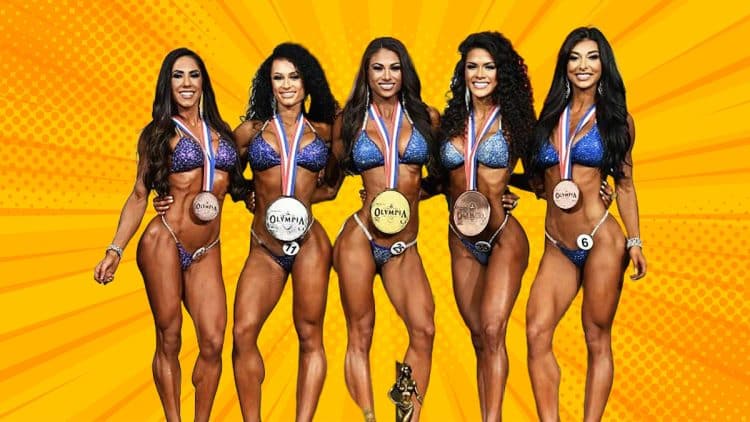 Once upon a time, the Olympia Weekend only offered three categories for female pro bodybuilders — Ms. Olympia, Fitness, and Figure. However, in 2010, the International Federation of Bodybuilding and Fitness (IFBB) added the Bikini division as the fourth women’s category for Joe Weider’s Olympia Fitness and Performance Weekend.

The Bikini division instantly became a major attraction and brought in a new talent pool at the most prestigious fitness showcase. More female athletes got drawn to the division as it did not focus heavily on muscle size alone. The competitors prioritized balance, shape, and overall appearance on the stage (hair, skin tone, complexion, and poise).

This article goes over the history of the Bikini Olympia contest, the notable moments, rivalries, and the 10 champions who have held the throne over the last 13 years.

Given below are all the Bikini Olympia winners:

There was a lot of anticipation for the inaugural season of the Bikini Olympia contest. Nathalia Melo and Nicole Nagrani entered the show as the favorites to battle it out for the top prize along with Amanda Latona, who had already made a name for herself in the fitness space.

Sonia Gonzalez stole the show with her impressive package and became the first-ever Bikini Olympia winner. The other two ladies on the podium would also win the Bikini Olympia crown each in the upcoming Olympia contests.

After a third-place finish in 2010, Nagrani was determined to challenge Gonzalez for the title. She worked hard in the off-season to make the necessary adjustments and returned stronger than ever to win the 2011 Bikini Olympia. She stood out as the clear winner, while Gonzalez dropped to fifth place. Melo retained her second-place finish.

Having come so close to winning the title with two consecutive runner-up showings, Melo finally won her maiden trophy at the third edition of the Bikini Olympia contest in 2012. Melo edged out Nagrani to get the top spot, whereas Gonzalez fell out of the top five.

Ashley Kaltwasser emerged as the 2013 Bikini Olympia champion on her Olympia debut, making her only the second woman to win an Olympia crown on her first attempt, the first being Cory Everson, who won Ms. Olympia in 1984. No male athlete has managed to conquer the Mr. Olympia throne on their debut since the inaugural showdown.

Kaltwasser was the first Bikini Olympia champ to defend her throne. She proved to be a dominant champion and won the show for three consecutive years between 2013 and 2015. With three trophies under her belt, Kaltwasser leads the list for the most Bikini Olympia wins.

Kaltwasser cemented herself as one of the greatest fitness athletes of all time. She also holds the record for the most competitive wins with 34 trophies on her glittering resume.

After three consecutive wins, Kaltwasser was determined to get her fourth trophy at the 2016 Bikini Olympia. However, she missed the mark and left the door open for a new champion. Courtney King capitalized on Kaltwasser’s error with an impressive appearance and won her first Olympia trophy.

Kaltwasser dropped to the fourth spot behind Angelica Teixeira and India Paulino.

King stepped away from professional competition after winning the 2016 Bikini Olympia, making it her last show.

The reigning Bikini Olympia champion King did not return to defend her throne in 2017. Brazilian competitor Teixeira emerged as the new victor at the 2017 Bikini Olympia. She returned with a significantly improved package after placing runner-up at the last edition.

In 2018, Teixeira took her physique to the next level and became the second woman to defend her title successfully. She faced a tough challenge from Lauralie Chapados, Janet Layug, and Elisa Pecini but managed to secure her second Olympia trophy. Kaltwasser finished in fifth place.

Teixeira was targeting a third win to tie Kaltwasser’s record for the most Bikini Olympia trophies. However, she could not extend her reign as Elisa Pecini stole the show at the 2019 Bikini Olympia. Layug finished runner-up again and Teixeira had to settle for third place after an underwhelming performance.

2019 was the year Jennifer Dorie broke through the top five.

Janet Layug established herself as one of the most consistent and disciplined athletes in the Bikini category. While Layug had won numerous other titles, the coveted Olympia trophy eluded her for multiple years — until 2020.

2019 turned out to be one of her best seasons as she won the Japan Pro Bikini, Asian Grand Prix Pro Bikini, Bikini International, and Arnold Classic Australia Bikini. Layug had momentum behind her going into the Superbowl of bodybuilding in 2019. However, she got edged out by Pecini for the top prize and finished in second place for the third time in her career.

Having narrowly missed out on the top spot, Layug left no stone unturned in her preparation for the 2020 Bikini Olympia. Despite the difficulties brought on by the COVID-19 pandemic, Layug would finally win her first Olympia trophy in Orlando, FL. She defeated the rebounding Teixeira and warded off proven talent, including Dorie, Etila Santiago, and Chapados.

Following her win, Layug declared that she would not return to defend her title at the next edition of the Olympia. Her announcement paved the way for a new champion at the 2021 Bikini Olympia. Former victors Kaltwasser and Pecini were hoping to reclaim the title, while top contender Chapados was looking to get her first trophy.

Dorie rounded up a stellar year with a win at the 2021 Olympia. She faced intense competition from Chapados but managed to get the nod from the judges in Orlando to win her first Bikini Olympia trophy.

Kaltwasser got back into the top three for the first time since her win at the 2015 Olympia.

The 2022 Bikini Olympia results surprised everyone. Heck, even Blanquisco couldn’t believe it. “I knew it was a matter of time, I just didn’t think it would be this time,” said Blanquisco in her acceptance speech.

54 competitors competed for the Bikini Olympia title. However, Blanquisco emerged on the top with her perfect balance, shape, and stage presence. The 2021 Bikini O champ Dorie finished runner-up.

The 2022 Mr. Olympia competition is going down this weekend and 11 bodybuilders will be crowned champion at the sport's...