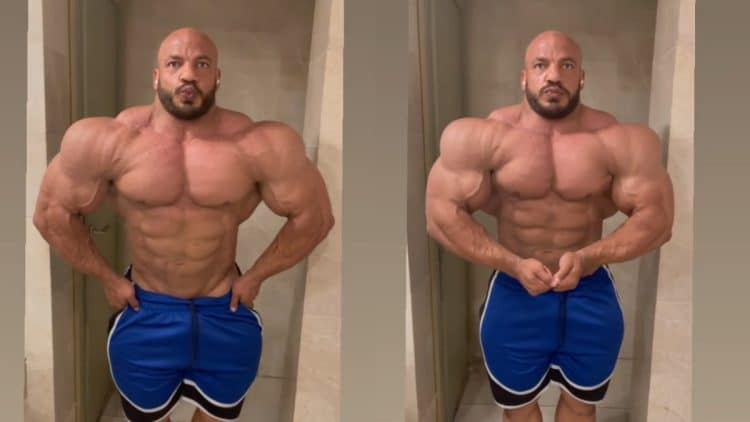 Two-time reigning Mr. Olympia Mahmoud “Big Ramy” Elssbiay made a name for himself in bodybuilding with shocking size. In a recent video uploaded on Instagram, Big Ramy shared a monstrous physique update just over three months out from the 2022 Olympia.

After Brandon Curry won the 2019 Mr. Olympia, many expected him to defend his title the following year in 2020. But Big Ramy had other plans as he showed up shredded to the bone and dethroned Curry to win the show. Ramy returned a year later and stole the show again with his unparalleled size while Curry ended up in second again, falling short to the same man.

Bodybuilding legend Jay Cutler took notice of Ramy’s dominance at the highest level and considers him to be the gold standard for the competition. Even when praising 2022 Texas Pro winner, Andrew Jacked, Cutler likened the top prospect’s back development to that of Ramy, who showcases crazy width in many poses.

Fellow bodybuilder and coach Milos Sarcev highlighted how Ramy’s width gives him an edge over other competition. Sarcev believes that a wide athlete who has the proper conditioning will look more imposing on stage. He used Cutler’s four Sandow trophy wins as a reference, highlighting his conditioning and width.

With the 2022 Olympia scheduled for Dec. 15-18 at Planet Hollywood Las Vegas Resort & Casino, Big Ramy has been working hard in the gym to take his physique to the next level.

Big Ramy is looking gigantic ahead of 2022 Olympia

In a recent video uploaded on his Instagram, Big Ramy shared a physique update just three months out from the 2022 Olympia. He looks massive and appears to have put on even more size without sacrificing the insane V taper he is known for due to his small waist.

Big Ramy is determined to get a third Mr. Olympia trophy. He had previously shared another massive physique update revealing he is tipping the scales at over 337.3 pounds (153.2 kg). Ramy could face a serious threat from Nick Walker, who had one of the most successful rookie seasons of 2021.

Although Walker has focused all of his efforts on Olympia this year, he acknowledged that Ramy would probably win the show again if he comes in shredded.

Ramy had revealed earlier in May that he is looking to step away from competing in bodybuilding and that next year would be his last one as a professional. Given his plans to retire at 38 years old, he will surely bring his best efforts to the stage later this year at the Olympia.