The four-time Mr. Olympia and Milos "The Mind" Sarcev discuss the crazy lineup of Men's Open competitors expected to compete at 2022 Mr. Olympia. 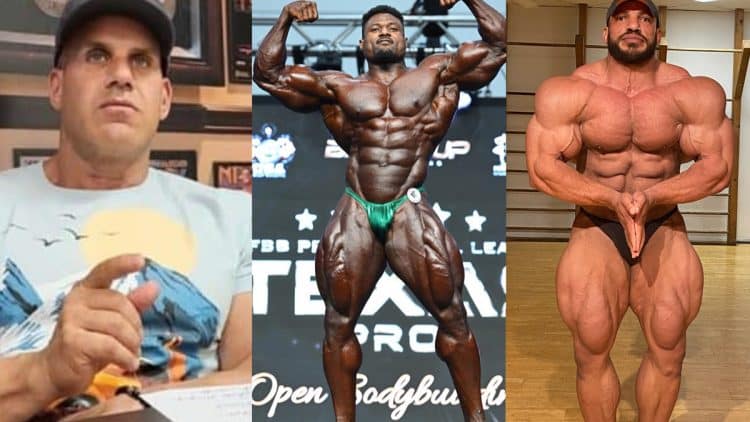 After Andrew Jacked (real name Chinedu Andrew Obiekea) stole the show at the 2022 Texas Pro last week, the bodybuilding community took notice, as well as four-time Mr. Olympia Jay Cutler. In a recent video, Cutler examined competitors from the Men’s Open division and gave his thoughts on Andrew’s potential on the Olympia stage.

Thus far, Andrew Jacked has already made a commanding case for rookie of the year. Standing at 6″2′, Jacked’s combination of size and aesthetics is rarely seen in the IFBB Pro League’s Open class. In March, Andrew earned his pro card dominantly at the 2021 Arnold Classic Amateur show. In preparation for the event, Jacked was trained and coached by bodybuilding great, Flex Wheeler.

Jacked, who also receives nutritional guidance from coach George Farah, continued to show promising signs in the sport after his Ohio performance. Before trying another show, he trained and posed once again with Wheeler and bodybuilding guru Milos Sarcev.

Making his pro debut, Andrew brought a standout package to stage at the 2022 Texas Pro. Despite boasting less experience, Jacked dwarfed many of his opponents. In addition to his shocking size, Andrew’s abs were deeply separated, which surely assisted in the final outcome. He defeated third-place finisher Steve Kuclo and runner-up Martin Fitzwater en route to earning his 2022 Mr. Olympia qualification.

Jay Cutler stepped away from the sport competitively in 2013. He still maintains a rigorous workout schedule and routinely discusses hot topics in bodybuilding. Given the crop of talent expected to compete at this year’s Olympia contest, Jay discussed Jacked and other Open class competitors.

During the video, Cutler critiques Andrew’s physique before saying that he and Michal Krizo can “100%” make the first call-out at 2022 Mr. Olympia.

“Easy for us to talk about how great he is now, and really he arrived, right.” Jay Cutler said. “I mean listen, there’s for sure with him I can see the lats flaring a little bit more. People critiquing his arms — he has longer limbs so he’s taller right. So, there’s more space, there’s a bigger gap to fill. Look at the peaks, the fullness and the triceps.”

Sarcev believes Jacked has a cartoonish look to his physique, especially when hitting the back double biceps pose.

“Every muscle is shapely like a cartoonish comic book superhero. Sarcev said. His lats are super striated. So, he has that potential right.”

“His arms looked massive in the back double bicep on stage.” Cutler told Milos.

According to Jay Cutler, if Jacked and/or Michal Krizo come in with conditioning, they 100% can crack the top ten at 2022 Olympia in their respective debuts.

“We just saw two guys [Andrew Jacked and Michal Krizo] that have not hit the Olympia stage yet but can 100% be in the top ten if they show up in condition.” says Cutler.

“Look at the width on the lat spread… it’s like Ramy, he has that crazy width in the lats.” say Cutler.

He added that Andrew’s physique has a width that is rarely seen on competitors and is hard to ignore.

“He has a width many people don’t. Ramy has a width, I said to this effect — Ramy standing next to [William] Bonac and Dexter [Jackson] at the Arnold Classic the one that he lost a few years ago, he was as wide as both of them. It was like ‘oh my God.’ How could you ignore that? asks Sarcev.

If wide guys are conditioned… it’s game over. You [Cutler] were basically having a game over just by showing up and showing that width.”

When examining the Men’s Open category at Mr. Olympia this year, Cutler and Sarcev agree the show has the makings to be one of the most competitive in the event’s rich history. With 212 competitors steadily switching to the Open, Jay contends that bodybuilding shows are becoming harder to predict.

“It’s like the Kamal [Elgargni] situation. In 212, he’s a monster right but when you stand next to an Andrew Jacked or these other guys… man it’s a big difference, that density.

It’s the density. People don’t talk enough about density. We see it on the Ramys. That Brandon Curry quarter-turn. Put Derek Lunsford in a quarter-turn next to Brandon Curry, what would you see? Where would we be at?” Jay says.

Cutler maintains that this year’s Olympia contest might be the best we’ve ever seen.

“This may be one of the greatest [Olympias] we’ve seen competition-wise.” Cutler exclaimed.

“The top 10 are going to be off the charts.” says Sarcev.

Cutler reiterated that the top 10 this year will be on a different level.

“If there is going to be 30 guys, yes, you’re going to have some guys that miss their peak, but you can sure as hell bet the top 10 are going to be sick.” Cutler said. “Normally, when you get to 8th or 10th, sometimes if it’s a low numbered show, the condition starts to fade right. I don’t know how that’s going to happen at this level.”

The 48-year-old retiree listed some of the names he’s keeping a close eye on for the biggest bodybuilding show of the year.

“Hassan [Mostafa] has found his rhythm. Rafael Brandao, I mean everyone has been talking about him. You just mentioned Samson [Dauda]. We just saw Akim [Williams]. Iain [Valliere] is improved.”

Adding to what Cutler said, Milos believes to get into the first call-out at 2022 Olympia, athletes will need to have a clear wow factor.

“This year, because when you see this lineup, you’re going to have a really hard time to leave that first impression. The first call-out is the first impression. Like hey, you have to have something wow.” says Milos Sarcev.

After Cutler named a few contenders expected to compete, it’s evident that a bodybuilder making his debut, like Andrew Jacked, will have an uphill battle on his hands to secure a spot in the top call-out. Looking ahead, Jacked is eying the 2022 Arnold Classic UK event, which will serve as his second pro show of this year’s season.

RELATED: Andrew Jacked Praises Larry Wheels for Helping Shape Bodybuilding Career: ‘He Will Push You Past Your Limits’

Another Mr. Olympia winner high on Andrew Jacked is Samir Bannout. In Samir’s opinion, Jacked has the potential to ‘automatically’ make it into the top four at the prestigious event. With comparisons to Big Ramy’s back, Cutler believes Andrew Jacked will be a dangerous wild card later this year at Mr. Olympia.