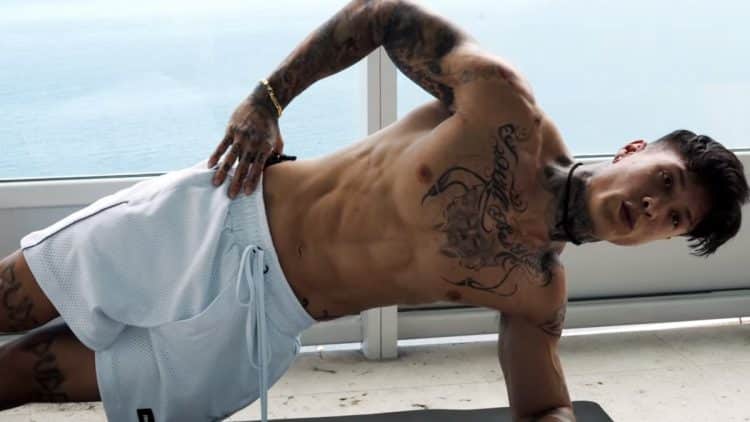 Known for his incredibly shredded physique, Chris Heria is a Pro Bar athlete, street workout champion, and certified personal trainer. He is also an entrepreneur and founder of ThenX, The Miami Trainer, and other fitness institutions like Calisthenics Evolution Institute and Calisthenics Academy.

Recently, Heria shared a 15-minute calisthenics abs workout with his 4.1 million-plus YouTube followers. Calisthenics is a training system where an individual relies solely on his bodyweight for exercise. While training equipment can be used in calisthenics, its use is significantly limited.

Chris Heria started the workout with a simple and effective exercise to work the lower abdominal—the good ol’ leg raises.

“Keep your legs as straight as you can. Squeeze your core, and don’t allow your feet to touch down,” Heria said.

Heria kept his arms stretched out above the head as the extra pull helps engage the abdominal muscles to a greater extent. As simple as they look, leg raises can make it difficult to laugh or even cough for a few days if you’ve never done them before.

Heria next performed the lying flutter kicks. This movement starts with the same position as leg raises—lying flat on the ground with hands stretched above the head. The next step of the exercise is to raise your legs alternatingly as high as you can in rapid succession without bending at the knees.

Once again, the exercise starts in the same position, and one has to abide by the following steps:

This movement can be a little challenging for beginners as one has to maintain balance throughout the range of motion. Beginners should start practicing this exercise by grabbing onto a table’s legs or any other heavy object with hands extended above the head.

Most bodyweight exercises are composite movements that activate different muscle groups in the body in addition to the target muscles. As a result, the stronger side tends to compensate for the weaker during many of these movements.

Performing this variation of leg raises eliminates this possibility and helps fix strength imbalances. Here is how to perform alternate single-leg raises:

Lying around the worlds

The final exercise in the first phase of Heria’s abs workout is another variation of leg raises—lying around the world. To do this exercise, perform the concentric part of a leg raise on your left side and the eccentric on the left. Alternate between sides with every rep.

Heria performed this exercise for 45 seconds before moving on to the second phase of the workout.

Also known as plank switches, this movement starts in a high plank position. The next step is to transition from the palms to elbows and then return to the push-up plank position.

Open, close, in, and out

Side planks served as the last exercise in the second phase of the abs workout (exercises starting in the high plank position).

A great way for beginners to advance toward full burpees. Half burpees are a less intense but effective exercise to work the core. The steps include:

A variation of the classic sit-up, this exercise involves the following steps:

Bicycle crunches are arguably the best exercise to work the abs and oblique. To perform:

Another variation of the sit-up, the crunch reach through works the obliques along with the abs. Steps include:

The Russian twist targets every muscle in the core and therefore it is an effective way to train your abs and core when you’re running short on time. This exercise by itself can qualify as a complete core workout. To perform Russian twists, you have to:

Phase 1 – From the lying position

Phase III – Off the ground from the sit-up position

In the video’s closing, Heria said:

“It’s going to develop insane core strength that’s going to transfer over to the more advanced skills all the while simultaneously working on your cardio and developing the physique.”

Calisthenics training can sometimes be frustrating as the progression often takes a lot of effort, and the results take a long time to show. However, it is also amongst the most cost-effective and challenging training methods. Additionally, most calisthenics exercises are compound movements that are beneficial in improving functional strength. So, will you start with this abs workout to test the benefits of calisthenics?