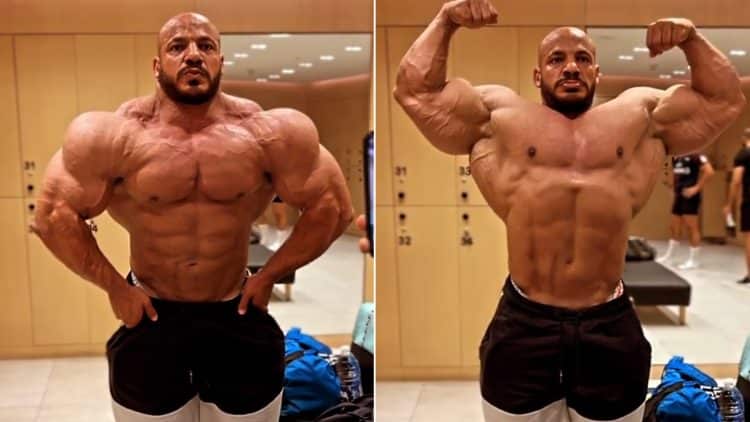 Preparations are heating up for the reigning Mr. Olympia champion Mamdouh ‘Big Ramy’ Elssbiay. In a recent post made to Instagram, Ramy showed off his current physique 18 weeks from Olympia and revealed his weight is steady at 153-kilogram (337.3-pound).

Big Ramy exploded into the limelight with freakish size and some of the biggest legs in the sport. The Open class bodybuilder turned in a third-place finish at the 2020 Arnold Classic before winning his first Mr. Olympia contest in the same calendar year.

After earning a lifetime invitation to compete in the Men’s Open at Olympia as a result of his 2020 victory, the mass monster took time away from bodybuilding’s biggest stage to produce an even better package. Ramy proved his first title wasn’t by mistake and dominated en route to securing his second Sandow trophy at 2021 Olympia, where he defeated the likes of former champion Brandon Curry and Hadi Choopan.

2022 has been a peculiar year for the two-time Mr. Olympia winner. Ramy was absent from a guest posing appearance at Jim Manion’s annual Pittsburgh Pro show. After not showing up to the event, Big Ramy later apologized to Manion for the mishap.

Questions about Ramy’s commitment to the sport only grew after he said his intention was to quit bodybuilding at 38 years old. According to the reigning champion, this was a promise he made to his children and stated the decision was made a long time ago. Nevertheless, the 37-year-old told his fans and Olympia President Dan Solomon, that he plans to win his third title later this year.

With preparations heating up for all competitors, Big Ramy gave fans a glimpse into his progress via Instagram.

Ramy has kept his weight consistent throughout prep in the last month. At the beginning of July, he met with his coach, retired IFBB Pro Dennis James online to discuss his weight. Ramy checked in at 152-kilogram (335.1-pound) and said his preparations are going according to plan in Egypt.

The two-time Mr. Olympia champion also shared recent posing footage several weeks out from his anticipated return to the sport.

Ramy will be tasked with a tough lineup of talent this year. Returning top finisher Choopan plans to win his first Sandow with undeniable conditioning. Former Mr. Olympia Curry will also be in the mix and intends to bring a bigger package this year to combat Ramy’s size.

2021 Olympia fourth place finisher Hunter Labrada has been working diligently to improve his physique. Mass monster Nick Walker who placed fifth last year intends to bring his best package to date. “The Mutant” continues to make headlines for his incredible feats of strength and is pushing the scales at 300-pounds himself.

Bodybuilding legend Jay Cutler believes Ramy will win 2022 Olympia this year ‘handily’. However, the 48-year-old says the competition has the potential to be one of the most competitive in the event’s history.

With so many contenders eager to earn their first Olympia title, Ramy’s physique will be put to the test. Even at 337.3-pound, Big Ramy looks lean, healthy, and determined to produce another coveted Sandow trophy.