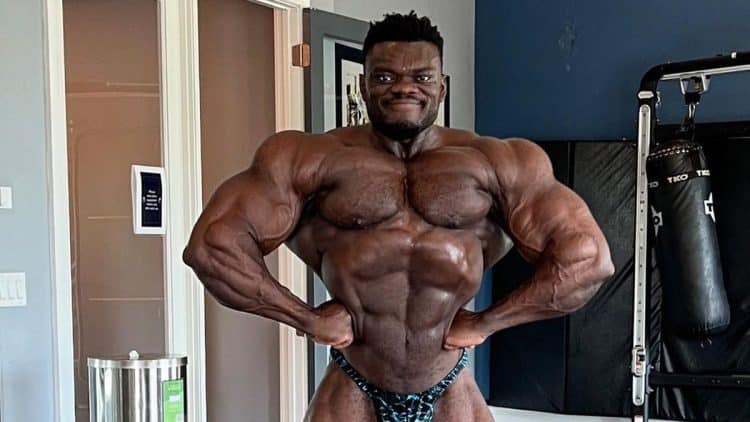 Bodybuilder Blessing Awodibu is coming off a tough showing at the 2022 Mr. Olympia, held Dec. 16-17 in Las Vegas, Nevada. In a recent post uploaded to Instagram, Blessing announced that he will not compete at the upcoming 2023 Arnold Classic as he wants to work on his shape before approaching another prep.

Blessing Awodibu rose to prominence for his monstrous physique in 2021. He turned heads in his IFBB Pro League debut at the Indy Pro, where he placed third. He followed that up with another appearance at the New York Pro, finishing sixth.

In 2022, Blessing turned in a fantastic season that saw him emerge victorious at the Indy Pro. He used that momentum as fuel at the New York Pro, where he also took home gold.

The outspoken bodybuilder entered his first Olympia as a promising prospect. However, there were plenty of newcomers at the show, like Michal Krizo and Andrew Jacked, who both earned pro cards and won pro contests before battling on the Olympia stage.

Blessing shared a fierce rivalry with Krizo and had beaten him in the past at an amateur event in 2017. He fired shots at the Slovakian native during the off-season. When Krizo earned his IFBB Pro card in October, Blessing welcomed him to the “a** whooping league.”

Bodybuilding coach George Farah weighed in on the new crop of talent that was set to battle it out for the title of Mr. Olympia. Farah suggested Andrew Jacked had a better physique than Blessing heading into the contest.

In the end, Hadi Choopan became the new Mr. Olympia, with former 212 champion Derek Lunsford finishing runner-up and Nick Walker in third. Andrew Jacked placed eighth while Krizo took 12th place. As for Blessing, he was tied in last place with a number of other competitors.

In a recent Instagram post, Blessing Awodibu announced his withdrawal from the nearing 2023 Arnold Classic following an uneventful appearance at the 2022 Mr. Olympia.

“Huge thanks to the [Arnold Sports] for the invite, one of my all time favourite show. But unfortunately I will not be doing the Arnold this year,” wrote Blessing. “Going off completely for almost 3 months after Indy and New York shows and travelling really affected my Olympia prep negatively, I definitely lost some muscle mass and I didn’t have enough time to fill out my physique before the Olympia.

Blessing plans to use the time to rebound effectively and hopes to push into the first call-out at 2023 Olympia later this year. Of course, first, he must win a pro show to qualify.

“So right now I’m just giving my body the much needed time to bring my shape back before any prep. Expect a crazy comeback later this year from #theboogieman.”

The 2023 Arnold Sports Festival will take place Mar. 2-5 in Columbus, Ohio. The organizers teased a sparse competitors list for the event last week. Blessing Awodibu was one of the eight athletes in the lineup, though it appears ‘The Boogieman’ now has other plans.