"The Boogieman" and Kai Greene teamed up to share a few of their favorite exercises for building mind muscle connection. 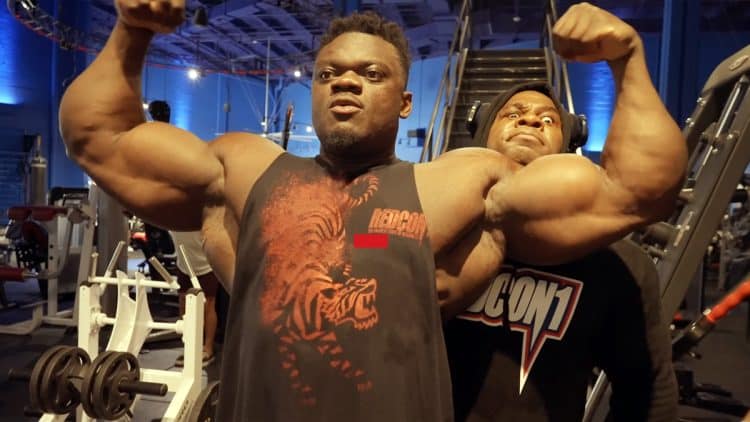 Bodybuilding veteran Kai Greene brought aesthetics to a whole new level throughout his career and recently joined forces with Blessing Awodibu to share some training tactics. In a recent video with Greene, Awodibu focused on building arms with a series of workouts in preparation for 2022 Mr. Olympia.

A three-time Arnold Classic winner (2009, 2010, 2016), Kai Greene emerged as a major threat in the Men’s Open division during the mid-2000s. In addition to these major victories, Greene managed to compete at the prestigious Mr. Olympia contest a number of times. While he was never able to secure first place at Olympia, the bodybuilder was highly respected for his size and conditioning. Greene is regarded by many as one of the best athletes not to win a coveted Sandow trophy.

Before retirement, Greene placed second in 2012, 2013, and 2014 at Mr. Olympia. Despite taking a step away from the sport, he still enjoys lifting weights and working out. The 46-year-old routinely shares motivational messages and posts, often looking back at his troubled childhood past.

Greene also took part in one of the sport’s hottest rivalries with seven-time Mr. Olympia Phil Heath. Greene hinted that the rivalry might reignite after teasing a return to Olympia in 2020, but he ultimately never came back to the stage.

Blessing Awodibu is a new school bodybuilder in the process of making his mark on the sport. He gained steam last year (2021) as a Men’s Open professional and made his Pro debut at the 2021 Indy Pro, a show that saw him reach the podium in third place. “The Boogieman” proceeded by competing at the 2021 New York Pro, which resulted in a sixth place finish.

With redemption on his mind, Awodibu made a statement by earning gold at the 2022 Indy Pro. Celebrated for bringing up his lagging lower body, Blessing took home the title at the New York Pro show in May as well. Shortly after, he called out “The Mutant” Nick Walker, with plans to ‘whoop his ass’ when the two inevitably battle on stage at Olympia this winter.

Below you can find a full list of the workouts used in the video:

Bent over rope push down

Greene and Awodibu started the workout looking to replicate each other’s styles.

“I’m trying to do this like… how do you do it, the King of New York style?” Kai Greene asked Blessing Awodibu.

“I’m watching, I’m trying to be like Kai. I normally stand and do this but today, we’re doing it the Kai Greene way.” Awodibu said.

Greene warned “The Boogieman” not to break the machine, as they finished a few sets.

Next, Awodibu brought the ‘Big Boogie Energy’ to his next workout: incline dumbbell biceps curls.

“Alright, this exercise is called an incline dumbbell curl. You keep your chest pushed forward. Elbows locked in your side. Flex that bicep as you pull this weight up to your stomach.” Kai Greene explained.

After they both practiced a few sets, Kai Greene jokingly tried to give Awodibu a ponytail.

“So overhead position like this, keeping your elbows in a fixed position allows you to stimulate activation on both ends of the triceps.” Greene shared.

According to Awodibu, “The Predator” taught him a variation of seated overhead dumbbell triceps extensions which he says greatly improved his front double bicep pose.

“A couple of months ago Kai showed me this movement, and it actually became my favorite triceps movement. As you can see, my front double biceps improved significantly. Awodibu explained.

Greene offered his own Pro tip this time, which was to keep the elbows in front of the body to hit the shorter head of the biceps.

“We got the elbows in the front of the body. Greene said. Now, when you’re flexing, you’re hitting the smaller head, the peak of your biceps. The shorter head.”

“That’s enough for the King of New York. I’m going to give Nick Walker some time to catch up.” Awodibu laughed.

Awodibu says that standing cable crossover triceps push downs are one of his favorite techniques for building the mind muscle connection. The 2022 New York Pro champion told Greene to emphasize the pause at the bottom of each rep.

“This is probably one of my favorites when it comes to mind muscle connection, contractions, you gotta stick your chest out and stand up straight. Yeah. Keep your upper right tight with your lat. Movements come right here from the elbow. That’s only movement we see right here. You want to stretch all the way up here and then contract. Make sure to pause at the bottom.” Blessing told Greene.

During their last exercise, Awodibu stressed the importance of ‘finding the right grip’ while performing cable biceps preacher curls.

Before leaving the gym, Awodibu practiced a couple of poses in front of Greene.

“You know what I didn’t know before… if you’re hitting front double biceps, I didn’t know that you got to up your elbows a little higher. That’s what Joe told me, and I should bring the lats up a lot more. I used to do it with my elbows straight, but it’s got to be a little higher. See, the lats actually are popping out a little bit more when it’s here.”

The Nigerian-Ireland native is determined to place well at 2022 Olympia given how often he’s been spotted training lately. The Men’s Open standout spoke about his ongoing rivalry with Nick Walker and praised the 2021 Arnold Classic champion for his tremendous work ethic.

With 2022 Olympia in less than six months, “The Boogieman” is turning up the heat during his off-season. After running through a series of arm workouts in Kai Greene’s company, Awodibu is ready to bring his best package to date to the sport’s biggest proving grounds in December.