Athletes Rep Cicherillo believes bodybuilders reaching a large audience would only need a small percentage of pay-per-view revenue from shows to earn thousands. 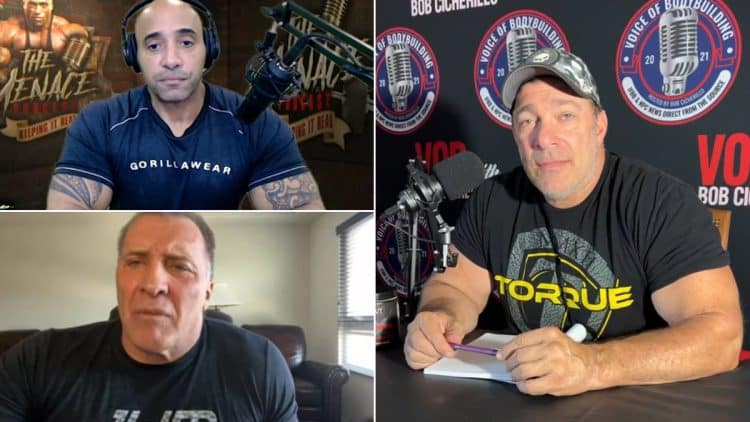 Known as the ‘Voice of Bodybuilding,’ retired IFBB veteran Bob Cicherillo has remained entrenched in the sport despite no longer competing. In Dennis James’ round table discussion on The Menace podcast, Cicherillo proposed paying bodybuilders a percentage of pay-per-view revenue from shows based on their ability to draw in viewers.

Bob Cicherillo is best known for his commentary duties at the Arnold Classic and the Mr. Olympia contest. He also led a fantastic career as a bodybuilder. The New York native competed largely from the early 1980s until the mid-2000s.

In 2002, Bob qualified to compete at Mr. Olympia and finished in 18th place, respectively. Having battled against countless veterans of the sport, Cicherillo presented his physique at the Arnold Classic once during his lengthy tenure in 2004, which saw him reach 11th place.

Cicherillo retired from bodybuilding after claiming victory at the 2006 Masters Pro World. In addition to his commentary duties, Bob is the IFBB Pro League Athletes Representative. Joining Dennis James for a candid discussion about athlete pay, Bob explained why bodybuilders aren’t receiving the type of renumeration they feel they have earned.

During the round table discussion, Bob laid out why he thinks pay-per-view revenue is an ideal method of payment considering the importance of supply and demand.

“You got a pay-per-view to work with these days and these numbers are not great. Well, again, a lot of the athletes do travel by themselves overseas. Mom, dad, sister, bro, by the time you get to the Olympia bro, they spent enough money on your ass, they ain’t coming alright. Hey man, I’ll stay home and get the pay-per-view and all that stuff.

Now, these athletes can still be making money if you were able to do that pay-per-view, we’ll call it a profit sharing. It’s not really profit sharing, but you know what I’m saying. If you get a big following, and listen, this goes for guys, girls, anything. I say you sell the most tickets, you get the money right.” Bob Cicherillo said.

To further drive his point about supply and demand, Bob used top wellness competitor Yarishna Ayala as an example, as she currently has over three million followers on Instagram. He believes athletes (like her) who draw a lot of viewers, should be paid a bigger piece of the pie if this measure ever got implemented.

“If you’re a girl, if you’re a Yarishna Ayala, you’re reaching a lot, and you have two million followers, all you need is half a percent. You’re going to be putting 20 grand in your pocket right? Put the thing on your Instagram, ‘hey everbody, buy the pay-per-view, for $39.99, a dollar goes to her, 20,000 people get it. She’s got 20 grand in her pocket. Bob added. This is a great system right.”

Retired bodybuilder and coach Milos Sarcev said this ‘system’ would bring about disadvantages. Milos added he doesn’t believe athletes should have to pay for flights to events or accommodations.

“Yeah but your rationale, with two million followers, she has a major advantage over a girl that has none. So, now Yarishna, just because she’s a social media star… you’re talking business and money. The first thing you said on making a point. Let them pay their own flight.”

I agree with Dennis, because I know a lot of European guys that make $200-$250 a month, you don’t even understand how they make it to this goddamn show. Then, they qualify…beautiful, and then no no, no, you still have to pay. You guys are promoters, I’m not. Milos continued. “You [promoters] should pay for the flight. That’s your winner!” Milos said to Bob.

Bob believes athletes who win major shows should have expenses paid for but argued that none of this is an obligation of the promoter.

“This should be a special thing. like I say, if they want to do that, that’s cool but I don’t think you’re under any obligation. Listen, if you want your way paid, then go win a major tournament. Go win a major. We’re not saying you can’t go win it, go in it and win it.” Bob told Milos.

Given the number of competitors qualified for 2022 Olympia, James and Cicherillo agree that an elimination round could be a viable solution for trimming down competitors throughout the event.

“I don’t have a problem with that Bob, don’t get me wrong, I totally agree. There should be an elimination round to cut people. I understand that. But at least, make sure they don’t have to pay their own way.” Dennis laughs.

“Ask Jake [Wood] what that tab is. I remember what it was.” Bob Cicherillo told Dennis.

Bob added that paying athlete expenses for events like Olympia would be too costly for promoters to incur.

“Bro it was $160,000-something and that was probably six or seven years ago. It’s probably over double. Right, that’s just per diem. Hotel accommodations, flights, and some people are coming from God knows where, so they’re not all equal. It’s at least a couple of grand per person. That adds up quick. People, are quick to jump on our ass, especially me as the rep. ‘Ah, you know the athletes…,’ look, just change the system around okay.”

While bodybuilding was featured on ESPN in the past, Cicherillo says the sport doesn’t have a big enough following to be carried on a regular TV network today.

“I can give it to you really clean guys. They say, ‘I don’t understand. We were on ESPN back in the day. We were on this; we were all over the place.’ TV revenue is all about ratings.”

“You’re not selling time. You’re not selling commercials when nobody is watching it. This answers the question, well I don’t understand, how do they have the hot dog eating contests on there but we’re not. I’ll tell you why: because as stupid as it is, it’s entertaining, and ten billion people will watch it.” Cicherillo said.

The bodybuilding commentator says without TV or pay-per-view revenue, athletes are never going to see the prize money increase into the millions. He also said selling tickets for pro shows has become exceptionally difficult.

“It’s very, very difficult to sell tickets for pros in any particular place. That’s just the way it is. Without TV revenue, without pay-per-view revenue, that’s why the prize money is not a million dollars. That’s why all these athletes should get… that’s ludicrous. You know, tenth place should be $200,000, but where is it coming from? When we don’t have mainstream appeal. That’s the difficult part.”

Bob’s demeanor and vocal nature made him a target for controversy a number of times. Chiefly, retired professional bodybuilder Dave Palumbo, who came out in 2019 and exposed Bob Cicherillo by calling him a ‘despicable human.’

Following Palumbo’s remarks, Bob argued that Dave was a bad person. According to Palumbo, the disagreement stemmed from seeing a woman Bob was still interested in.

Bodybuilding veteran Lee Priest also had a falling out with Cicherillo. In 2020, Priest tore into Bob, calling him a ‘two-faced idiot.’ According to Priest, he said Bob was not genuine about wanting to start a union for bodybuilders back when discussions were heating up about the issue.

RELATED: Bob Cicherillo Responds To Ronnie Coleman Diuretics Comments: ‘Put Your Money Where Your Mouth Is’

He’s ruffled some feathers during his time as an Athletes Rep, but Cicherillo believes he understands why bodybuilders aren’t getting paid what they feel they deserve. Cicherillo’s solution for the growing problem is to start paying bodybuilders pay-per-view revenue from events based on their ability to draw viewers.