Grimes and Franklin continue to make progress under Milos Sarcev’s watchful eye for the 2022 Olympia. 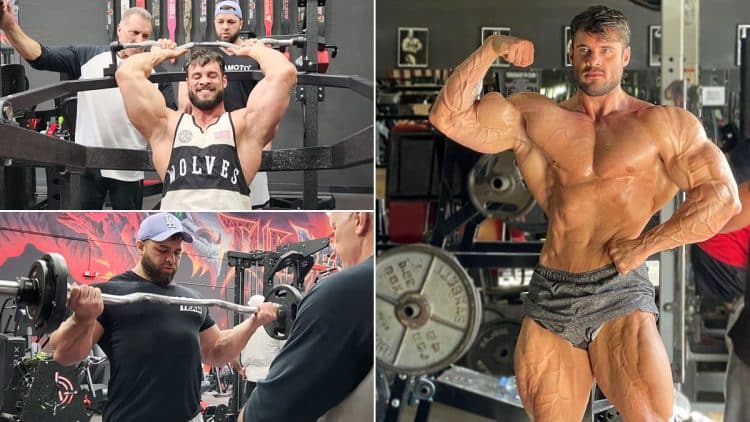 Men’s Open bodybuilder Regan Grimes and Classic Physique competitor Logan Franklin recently joined hands for an intense arms workout. After back-to-back seventh place finishes at the 2022 Arnold Classic and 2022 Boston Pro, Grimes announced his decision to step away from competition until the 2022 Olympia, scheduled to take place between Dec. 15-18, 2022, in Las Vegas, NV.

Franklin, on the other hand, did not qualify for last year’s Olympia. He did, however, punch the ticket for this year’s Olympia by winning the 2021 Shawn Ray’s Hawaiian Classic, held on November 20th, in Honolulu.

The bodybuilder duo trains under legendary bodybuilder and coach Milos Sarcev, and they recently went through a crushing arms workout together. The video of this session was uploaded on bodybuilding legend Jay Cutler’s YouTube channel. So without further delay, let’s look at the workout as it unfolded.

Grimes led the way to begin the workout with the triceps superset to get the blood flowing. He performed one set each of the rope pushdown and overhead cable triceps extension in quick succession, and Franklin followed suit.

Most arm exercises involve the elbow joint, making it extremely important to warm up. Triceps pushdowns are an effective way to warm them up without overly fatiguing the muscles.

After a warm-up set each, Grimes and Franklin performed the working sets with slow reps before moving on to the next exercise.

Sarcev instructed the bodybuilder duo to get a ‘touch-up’ set of skull crushers to get a hang of the movement before starting the working set. Sarcev asked his pupils to perform the sets with slow movements to increase focus on the triceps and avoid other muscles from compensating.

After getting a triceps pump a few sets later, Grimes and Franklin turned their attention to the biceps.

This served as the first biceps exercise of the day. Dumbbell incline curls are performed while sitting on a bench set on a 45 or 60-degree incline. The back of the individual performing the movement rests flat against the pad. This variation of the dumbbell curl is not as commonplace as the standing dumbbell curl. However, it does load the muscles to an extent other variations don’t necessarily do.

Grimes and Franklin performed a few sets of this movement under Sarcev’s supervision. They employed both variations — single arm curls and both arms together.

After EZ bar curls, Grimes took to this isolation movement to work the brachialis muscle. The preacher curl machine is beneficial because it allows a deeper biceps stretch and puts it under constant tension. Grimes and Franklin performed a few sets of this movement to failure. Following this, they switched to working the triceps in the next exercise.

The next exercise involved an overhead extension machine with an EZ bar attachment to aid in a more natural arm movement. Seated overhead triceps extensions reduce the core involvement as your back rests against the bench. Therefore it helps isolate the triceps to a greater extent. Grimes and Franklin completed a few sets of overhead extensions on the machine and jumped right back to do some biceps work.

The bodybuilder duo went on to perform hammer curls next. This movement works the brachialis, brachii, and brachioradialis muscles. Although simple, hammer curls need to be performed with the correct form to reap maximum benefits. The wrist positioning and grip allow lifting heavier weights. Therefore, hammer curls can help add size and thickness to the arms.

Next, Regan Grimes and Logan Franklin took to the single-arm cable pushdown with a D-handle. This classic triceps exercise works the lateral and medial triceps heads. Plus, it helps in shoulder joint stabilization when performed with a proper form. They both performed a few sets of this movement to failure and wrapped up the triceps routine.

Standing dumbbell curls — a staple biceps exercise — served as the finisher for the training session. The workout ended with a brief posing session in the gym.

Note: The exact number of reps and sets was not revealed in the video.

Regan Grimes and Logan Franklin have both qualified for the 2022 Olympia in the Open and Classic Physique divisions, respectively. In one of the more recent interviews, veteran Samir Bannout opined that, in due time, Franklin will emerge as a serious threat to the Classic Physique king Chris Bumstead. Looking at their training progress under coach Sarcev, it seems probable that both of them will present a lot of problems to the top-tier competition at the Olympia later this year.

You can watch the full workout video here, courtesy of the JayCutlerTV YouTube channel: