Four of the IFBB's best Classic Physique stars discussed their 2022 season in bodybuilding and who they perceive as the biggest threat this year. 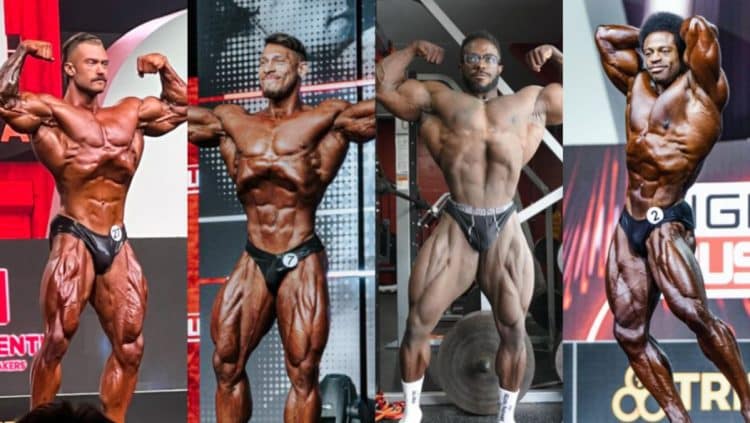 With each passing year, fans have seen Classic Physique bodybuilders explode in popularity. In a recent video on the Olympia TV YouTube channel, Breon Ansley and Terrence Ruffin gave their opinion on who is a better poser before Ramon Rocha Queiroz called out reigning champion Chris Bumstead.

The IFBB’s Classic Physique category is brimming with talent. The division is ruled by one of the most popular bodybuilders in the world, Chris Bumstead. After stripping the Olympia title from Breon Ansley’s hands in 2019, ‘C-Bum’ has yet to slow down on bodybuilding’s most prominent stage.

He defended his title successfully in 2020, and 2021, showcasing some of the best conditioning the Classic Physique class has seen since its inception. However, according to rising star Ramon Rocha Queiroz, the champion’s time at the top is coming to an end.

In addition to fans clamoring for Classic Physique, bodybuilding legend and seven-time Olympia winner Arnold Schwarzenegger also shared his appreciation for the category. In the past, the 75-year-old superstar admitted that bodybuilding has become dangerous. In spite of that, he believes Classic Physique is the ‘future.’

Many of the division’s top athletes are preparing their physiques for 2022 Mr. Olympia. For the past two years, Terrence Ruffin has won the Arnold Classic title and remains a top threat. He is widely respected in the community for his eloquent posing routines.

Former two-time Classic Physique Olympia champion Breon Ansley, nicknamed the ‘Black Swan,’ is lauded for his graceful posing as well and will look to pick up his third Sandow at Olympia this winter. Another top Classic Physique competitor to emerge this year was Germany’s Urs Kalecinski, who managed to defeat Ansley in March at the Arnold contest.

Given how competitive the division has become, Ruffin, Queiroz, Ansley, and Kalecinski joined Olympia TV host Terrick El Guindy, to discuss a number of issues relating to their upcoming contest, scheduled for December 15th – 18th, in Las Vegas, Nevada.

Breon Ansley and Terrence Ruffin Size Up Each Other’s Posing Skills: ‘Terrence Has No Weaknesses’

During the latest Olympia TV video on YouTube, Breon and Terrence discuss who they believe is a better poser in the IFBB Pro League.

“Terence has no weaknesses, a great flow in the physique, phenomenal posing, and great condition, so he’s hard to beat. Ramon finished second to Terence, and he said he lost to him from the back,” says Breon Ansley.

Ansley insisted that many bodybuilders look their best at their smallest weight. He used bodybuilding veteran Chris Cormier and seven-time Olympia winner Phil Heath as examples.

“You know, it would be a challenge for all of us to put on that much muscle and still have the same shape and weight, but then again, history has said that many guys have had their best looks at their smallest weight.

Ruffin agrees with Ansley that bodybuilders can sometimes hinder their physiques with too much added weight.

“The Classic Physique is still very volatile, and no one in that lineup can even win a show now besides us three. So even myself — you know, [you] have to focus on yourself and stay on your game,” Terrence Ruffin shared.

Athletes’ rep, Bob Cicherillo interjected and said Urs Kalecinski has a physique comparable to Chris Bumstead’s. He added that they are very similar in terms of ‘height, structure, symmetry, and proportions.’

“You can get too big in bodybuilding and it doesn’t do you any good. Urs’ waist is so small that even though his arms need to come up a little bit, they don’t look like a big weakness, says Bob Cicherillo. “These two guys [Urs Kalecinski and Chris Bumstead] are very similar in height, structure, symmetry, and proportion. They both have excellent symmetry and proportion, and a relatively small waist.”

Before moving on, Breon Ansley emphasized how difficult it is to take someone’s place at Olympia unless they make mistakes.

“Unless something changes in the defending champ’s situation, anything can happen on game day. If Terence should spill over and weigh 170 pounds, it would be a problem, but unless somebody really makes a mistake at that level, it’s difficult to take people out of their places,” says Breon Ansley.

Translated by Terrick El Guindy, Ramon said he’s shored up his back weakness and disagrees with ‘C-Bum’ that ‘all these guys are fighting for second.’ Queiroz believes Bumstead will be surprised at this year’s Olympia contest.

“Ramon said he disagreed with Chris Bumstead’s statement that all these guys are fighting for second, and he’s going to get surprised at the Mr. Olympia,” Ramon is training with the best trainer in Brazil, Fabricio Paschallocki, and he says his back is no longer a weakness.

“I’ve always been extremely strong with my arms, and that’s why my arms over developed, but right now he’s being a little more conscious of hitting the proper body parts,” says Terrick and Ramon Queiroz.

The Classic Physique category has never been more popular with plenty of rising stars proving they can compete at the highest level. With 2022 Mr. Olympia in less than 15 weeks, Classic Physique contenders like Ruffin, Ansley, Kalecinski, and Queiroz are determined to bring a package capable of dethroning the reigning champion.