Bostin Loyd's mom calls attention to the deceptively dangerous sport of bodybuilding: 'thing about bodybuilding is you look great on the outside, but your inside is dying' 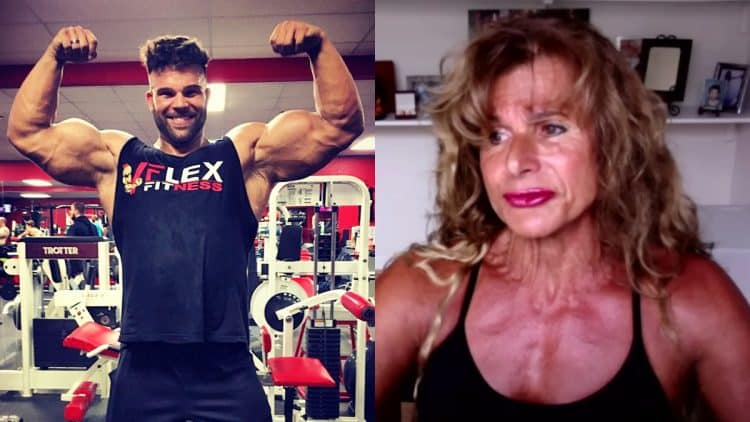 Five months following the untimely death of 29-year-old bodybuilder Bostin Loyd, his mother, Marie Raia, is speaking out about the tragic circumstances. In a video published on the Rx Muscle YouTube channel, Raia reflected on her son’s “death wish” and the sequence of events that led to his passing.

“He needed to know that we loved him, and his actions will affect us all and his son.” said Maria Raia.

Like her son Bostin, Raia also started bodybuilding at a young age. She began the sport at 21 years old and has led a career spanning four decades. Marie was an active competitor and took to the stage a total of six times in 2020. One of her most memorable victories came at the NPC National Championships, but instead of pursuing a career against other professionals, she opted to remain an NPC competitor.

Raia was shocked by the sudden passing of her son and vocal steroid enthusiast Bostin Loyd. News of his passing was made available on Feb. 25, 2022. He was suffering from stage five kidney failure at the time of his death though an aortic dissection proved to be the actual cause of death, according to an autopsy report.

An aortic dissection is described as a tear of the inner layer of the large blood vessel connected to the heart. This condition may cause severe chest pain and upper back pain. If left untreated, it can prove to be fatal. Bostin’s mother, Raia Marie joined Dave Palumbo on YouTube to share new details about her son’s sudden death.

Raia Marie Opens Up About Bostin Loyd Dying Young: “He Didn’t Believe in Doctors, That Was the Problem”

During the video with Dave Palumbo, Raia described how Bostin was feeling leading up to his tragic death and his disapproval toward doctors who were trying to help him.

“Back pain, leg pain, he was at the gym and I guess he was on his back and he was in total pain. Instead of calling 911, Ariela came and picked him up, he didn’t want to go to the hospital.” Marie Raia told Dave Palumbo. “He didn’t believe in doctors, that was the problem. Every time he went to the kidney specialist, every time he talked to him, he thought he kind of knew more than they did. That was the big problem.” Raia Marie told Dave Palumbo.

Marie said Bostin thought he knew more than the doctors treating him. She explained that he ate ‘crappy’ days before his passing and was dabbling with narcotic painkillers like Oxycodone.

“That week, he was eating pizza, eating crappy, working out. Doing what he shouldn’t of did with the drugs. I think he had a death sentence.” Marie explained. “No. I did not know he was doing those drugs at all. Because he was always against that kind of stuff growing up.”

When asked by Dave why Bostin was taking painkillers, Raia said it was to cope with the internal and external pain he was dealing with.

“Both. I think he knew the kidneys, he was feeling lousy from the kidneys. Feeling lousy that he wasn’t going to be able to compete. He was trying to cope with everything. Why do people do drugs? To cope with their pain.”

She said Bostin discouraged her from going to the doctor’s with him because she would always stress him out about his health problems. Eventually, Bostin met a doctor who stood up to him verbally, and that was one of the few health care professionals he actually trusted.

Finally, one of the doctors, he didn’t say anything to him, and he said, ‘well why aren’t you telling me about this?’ He said, ‘why should I tell you anything? You’re not going to listen to me anyway. Then Bostin goes, ‘well okay, maybe I like you now.’ He liked the combativeness. When the doctor was too nice, he didn’t like it.” Raia Marie shared.

Raia on Loyd’s Childhood: “He Was Diagnosed with Oppositional Defiance”

Loyd was known for his outspoken nature, especially when it came to steroids. According to his mother, the bodybuilder was diagnosed with ‘oppositional defiance’ at a young age.

“He was diagnosed as a child with oppositional defiance, which kind of made him famous in the long run. Marie shared. “Oppositional defiance is you say yest, and they say no, no matter what. You’ll notice that in a lot of his stuff, he would get everybody pissed off at everybody, and sit back and watch everybody get mad at each other online.”

Marie believes Bostin was smart enough to know that he was partaking in a lifestyle that could cause death. She believes he had a “death wish” and pointed to his tattoo, which displayed, ‘get big or die trying.’

“I believe so. I believe there was something going on in his brain chemistry because why that last week he was doing all this stuff… and he’s smart enough to know that this was going to cause death. Yeah. I believe for some reason he had six weeks prior to before he died, I called the father up and I said you need to get out here. We need to have a talk with Bostin. He has a death wish. He has that tatoo on him, ‘get big or die trying.’

After Raia called Bostin’s dad to coordinate for a drug intervention, his dad brushed off her worries and called him to discuss his aorta, a condition Bostin’s father also suffered from. Raia said her son was a ‘drug addict’ that needed help.

“We need intervention now and the father laughed at me. He said, ‘he’ll be alright, he’ll be alright.’ He called him up and asked about his aorta, but what we needed to do was have a sit-down talk and say, ‘you know what, we all love you but you’re a drug addict.

Bodybuilding, steroids, cocaine, anything, you become a drug addict. That’s what we needed. We needed intervention.”

Marie believes bodybuilding is worse than cocaine. With bodybuilding, she argued that athletes can look great on the outside, but on the inside, their bodies are dying.

“He looked good. You know the thing about bodybuilding is you look great outside, but your inside is dying. Like the kidneys, the heart, it was enlarged and twice the weight. The bodybuilding is a funny sport. You’re seeing them die on stage. They looked so great; how could they die? It’s even a worse sport than cocaine, with cocaine you look lousy when you’re taking it. But with bodybuilding, no, yeah, you look great. Everybody says how great you look.”

There have been an alarming number of deaths shaking the sport as of late. Last year, former Mr. Olympia Shawn Rhoden and George Peterson passed away from heart complications.

Weeks after Loyd’s untimely death, 44-year-old Cedric McMillan died, though his cause of death has yet to be verified. A few weeks ago, IFBB/NPC judge and bodybuilder Jerry Ward passed away as well, though no details surrounding his death have been made public either.

While Raia knew of Bostin’s steroid and drug use, she was unable to get him the help he needed while he was alive. She hopes that by sharing her story about Bostin Loyd, bodybuilders will learn from his mistakes and practice the sport in a safer manner.