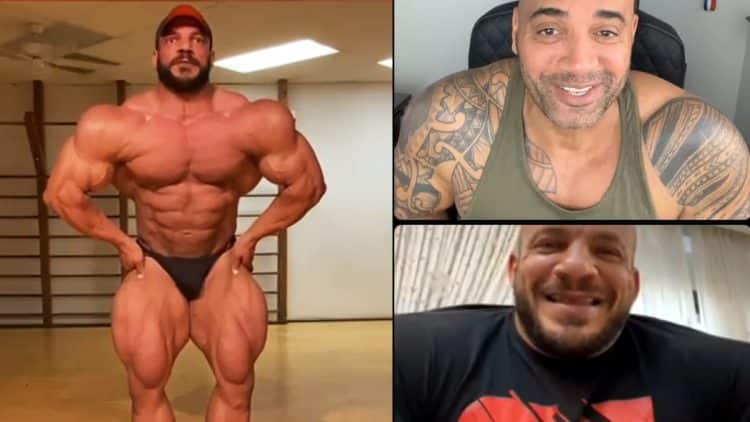 Mamdouh ‘Big Ramy’ Elssbiay, a two-time Mr. Olympia, is ready to make another statement at the biggest show of the year this December. In a recent video, Big Ramy joined Dennis James to discuss his preparation and revealed his current off-season weight of 152-kilogram (335-pounds).

Big Ramy is considered by many to be the best Men’s Open bodybuilder in the world. He’s proved as much on two occasions. He defeated reigning Olympia champion Brandon Curry in 2020 to become champion. Then, Elssbiay returned to 2021 Mr. Olympia and won the show for the second year in a row.

Thus far, Big Ramy’s 2022 season has been littered with obstacles. After no-showing at IFBB President Jim Manion’s Pittsburgh Pro show in May for a guest posing appearance, it took over two weeks for the Egyptian national to apologize and explain his absence. Following the no-show, Big Ramy made it abundantly clear that he is planning to defend his title in the coming months.

Elssbiay said recently that next year (2023) will be his last year competing at Mr. Olympia. According to the Men’s Open juggernaut, the decision was made a ‘long time ago’. He promised his children he would finally hang up his posing trunks next year when he turns 38 years old. Ramy has been in shadow mode for much of his 2022 season, but the reigning champion is determined to bring his signature size and muscularity to the Las Vegas stage in less than six months.

Big Ramy on Training in Egypt for 2022 Olympia: “Everything is Fine”, Tips Scales at 335-pounds

In a recent sit-down interview with one of his coaches, Dennis James, Big Ramy revealed his monstrous off-season weight of 152-kilogram (335-pounds).

While some have doubted Elssbiay’s size during the off-season, James and Elssbiay laughed it off as Big Ramy was so wide he could hardly fit on the camera.

“To all the people who think he is small now… let me get the exact number, hold up. 334.4-pounds. Almost 335. Yeah, let them think you’re small. I see you’re eating. You ready to kill it? James clarified. “What’s new with you, everything good over there in Egypt?

The IFBB Pro enjoyed some steak while briefly explaining to James how his training camp has been going.

“Everything is fine.” Big Ramy shared.

Big Ramy added that a ‘great generation’ of talent is on the rise and acknowledged that many of the top guys in the sport are ‘working very hard’.

“I think we have a great generation is coming to the lineup in Olympia and that will mix it up and make the lineup very good competition. Big Ramy added.

One name that has attracted a lot of hype this year is Hassan Mostafa. Mostafa hails from Big Ramy’s stomping grounds in Egypt and has already proven to be a serious threat on stage when he dials in his conditioning. Big Ramy believes Mostafa is among one of the top bodybuilders and judging by his recent victories at the 2022 Puerto Rico Pro and Orlando Pro, the reigning champion’s assessment isn’t off base.

“I think that most of them is working very hard. They are trying very hard to be in the top of bodybuilding and in Egypt. Now, I think he [Hassan Mostafa] will make everyone in Egypt, he think he can be in the lineup and can go more than before because Hassan is still young. He’s still young.”

Big Ramy will be challenged by a number of high-profile bodybuilders at Olympia later this year. The consistently shredded Hadi Choopan is eager to pick up his first Sandow trophy, who secured third place at last year’s 2021 event.

2021 Olympia fourth place finisher Hunter Labrada plans to bring his best package to the stage, and right behind him is Nick “The Mutant” Walker who continues to turn heads during his off-season preparations. Walker landed in fifth place at 2021 Mr. Olympia in his debut at the show and plans to improve upon that placing when he attends the contest this winter.

Ramy intends to remind all challengers this year why he has won the most prestigious title in the world for two years running. After revealing his weight of 152-kilogram (335-pounds), it’s evident that Big Ramy’s off-season preparations are ramping up.

The countdown until 2022 Mr. Olympia has begun and bodybuilders Iain Valliere and Blessing Awodibu have embroiled themselves in a...