"The Black Swan" continues to share bodybuilding knowledge as the 2022 Olympia prep intensifies. 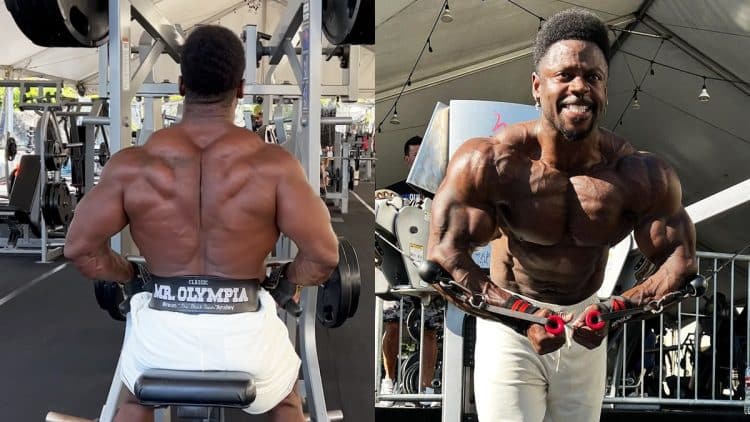 Breon Ansley is busy adding new facets to his physique to bring a whole new version of himself to the 2022 Olympia stage. He has competed in the 212 and Classic Physique divisions of the IFBB Pro League. Ansley is the former two-time Classic Physique Olympia champion who won the title in 2017 and 2018. However, he is still a top contender in the division, having secured a respectable third spot at the 2020 and 2021 Olympia, behind champion Chris Bumstead and runner-up Terrence Ruffin. The former champ last competed at the 2022 Arnold Classic, where he finished fourth.

Recently, Ansley hinted at a move up to the 212 division. However, he will call the Classic Physique division home for at least the upcoming Olympia. The 42-year-old is training with furious intensity to recapture the crown at the 2022 Olympia, scheduled for Dec. 15-18 in Las Vegas, NV.

After announcing his intentions to bring his biggest-ever arms to the Olympia stage, Ansley now shows the bodybuilding community what he is doing to improve his chest and back.

He went through a chest and back workout at the Gold’s Gym in Venice Beach, CA, as a part of his competition prep. The video of this training session was uploaded on his personal YouTube channel. So without further ado, let’s take a closer look at Breon Ansley’s training session and the bodybuilding wisdom he shared.

Breon Ansley trains his chest and back

“We want our back to be (really thick) when it’s all said and done. Then we’re going to work a little bit on the chest too, refining the chest…” Ansley said.

Ansley started the training session with a back exercise and performed close-grip seated rows. Rowing movements or horizontal pulls are proven to help increase back thickness. In addition to working the lats, this movement also targets the upper back muscles. Overall, seated rows are also an effective way to improve posture. The Black Swan did a few sets of this exercise and moved on to another seated row variation.

Variations of the same exercise can help target muscles from different angles. The low rows are a seated row variation that activates the rhomboids, latissimus dorsi, and rhomboid muscles. Ansley took to this exercise to work the upper back further and got some good sets under his belt.

Ansley next took to this seated row variation and performed a few sets.

The bent-over dumbbell rows are one of the best movements for complete back development. They train the lats, teres major and minor, trapezii, rhomboids, infraspinatus, pectoralis major, brachialis, and brachioradialis. Ansley cranked out a few good sets of this movement unilaterally and moved on to the chest workout.

He applied the rest-pause method to the chest exercises and said:

“One thing about rest-pause is that rest-pause really works on your strength endurance. This, in turn, is going to give you a look to the muscle as far as depth and separation as well as roundness and quality.”

After completing a few solid sets of this exercise with the rest-pause method, the 42-year-old explained the two most effective advanced training principles to build good-quality muscles — the failure and rest-pause methods. Ansley explained:

“We have two different styles of training that give us quality. That’s failure — drop sets, supersets, and volume training. And then we also have a rest-pause style where we work with heavier weights, and we continue to do however many reps of the same heavy weights as we can with minimal rest in between… Those are the two best styles in my opinion for quality,” Ansley added.

He added that it doesn’t matter how many reps you can do between those short rest periods as long as you follow the rest-pause method. According to him, it can be as less as two to three reps between the rest periods.

Ansley next took to this chest press variation on a plate-loaded machine and cranked out a few sets with the rest-pause method.

This isolation exercise is great for inducing a nasty muscle pump at the end of the workout and activating the chest muscles. Ansley cranked out a few sets of this movement in the bent-over position with slow and controlled motion and called it a day.

Ansley is one of the most experienced competitors in the Classic Physique division. However, he still has the drive and hunger to learn and grow as a professional athlete. His fans hope he can combine these attributes with his work ethic to become a three-time Classic Physique Olympia champion later this year.

You can watch the full workout video below, courtesy of Breon Ansley’s YouTube channel: