Wheeler warned Bonac not to chase Ramy's size like he chased Ronnie Coleman during his career: 'it's about being better not bigger.' 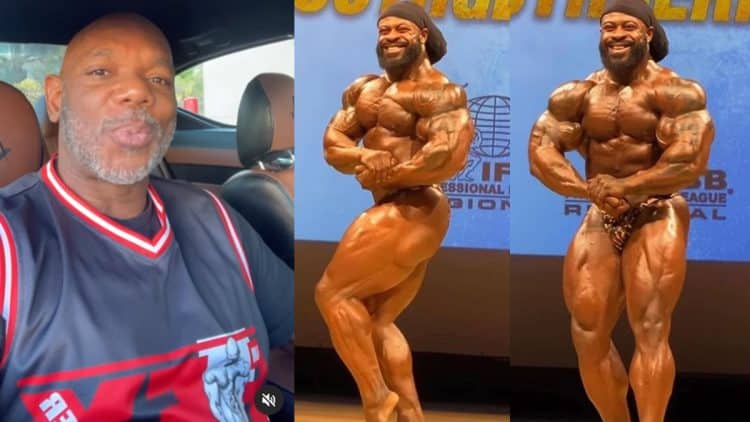 William Bonac is on a mission to secure his first-ever Mr. Olympia title. In a recent video, legend Flex Wheeler advised Bonac not to chase the size of reigning two-time Mr. Olympia Mamdouh ‘Big Ramy’ Elssbiay and offered some posing tips.

“The Conqueror” has found himself as a frontrunner ahead of this year’s Mr. Olympia contest. His combination of size, conditioning, and muscle density make him a legitimate threat to Ramy’s title. After all, not only has Bonac defeated Ramy in past competitions like at 2018 Mr. Olympia, but he’s also come incredibly close to being crowned champion.

Last year, Bonac struggled to reach the podium on the Olympia stage and walked away in sixth. Following the result, Bonac made improvements and came back with a vengeance at the 2022 Arnold Classic.

This year delivered a number of Men’s Open contenders. Newcomers Andrew Jacked and Michal Krizo did the improbable and earned their Pro card as well as their Olympia invitations in the same calendar year. With time running out until the blockbuster event, Flex Wheeler discussed William Bonac’s contest prep and what he should expect when he steps on stage again.

Flex Wheeler to William Boanc: ‘Don’t Make the Same Mistake I Did When I Chased Ronnie Coleman’s Size’

Wheeler was shocked by Bonac’s size when he saw his latest guest posing appearance in Germany.

“Just seeing you guest pose, I was actually freaked out. I was shocked. I had no idea you were guest posing. When you popped up on Instagram, I was like, ‘let me have a look at this.’ I know you’ve been training hard and being silent,” Flex Wheeler said.

During his career, Wheeler tried to emulate Ronnie Coleman‘s massive physique which he says was a mistake. This year, Bonac has been open about his ambitions. He intends to ‘play the size game’ against Ramy even though many consider Ramy’s muscularity to be one of his greatest weapons. Before moving on, Wheeler stressed to Bonac that “bigger isn’t always better.”

“I’ve made that mistake also. You’re chasing an image that’s portrayed to be the number one and you want to emulate that because that’s identified to be number one right. But that doesn’t mean that image is going to look good for me.

I made that mistake chasing Ronnie [Coleman] and getting too big. Don’t make that mistake man. It’s about being better. Better is better. Bigger isn’t always better,” Wheeler said.

The eight-time Mr. Olympia Lee Haney has also addressed this issue. He believes playing the size game against Ramy is a losing battle. When he discussed the Men’s Open lineup, he told Brandon Curry to bring better muscle separation to establish himself as a credible contender.

Despite the hype surrounding newcomers in the league, Wheeler believes until they compete on the Olympia stage, it’s just hearsay and background noise.

“Talk is cheap. Talk is cheap and talk isn’t talk any more. It used to be in a magazine. Now, it’s videos and photos. And I said that before, I’ve said it for the last 10 years.

That doesn’t mean a damn thing. I don’t give a damn what you look like an hour before the show. Five minutes before you walk on a show, all that matter, is that 15 or 20 minutes you’re on the stage for prejudging and the night show. I don’t give a damn.”

After listening to Wheeler, Bonac briefly discussed where he needs to improve for this year’s Olympia contest.

“I just can’t let myself go too much [on stage], especially when I’m doing like maybe a side chest or a transition for a side chest, I can see my stomach coming out. That’s something that I have to focus on as well. Trying to hold my breath the whole time and getting my breath when I’m not facing the audience,” Bonac said.

Posing is the same. Any opportunity you get to show yourself, you better take it. You better take it. The Olympia this year I think is going to be a dog fight. I hope you’re working on your posing,” Wheeler added.

In addition to sharing some wisdom with Bonac, Wheeler has led a successful 2022 season as a coach. He helped shape and develop Andrew Jacked. Andrew earned his pro card this year and won two consecutive Pro shows at the Texas Pro and the Arnold UK.

Time will tell if Bonac’s decision to play the size game against Ramy pays off. Should he take the advice of bodybuilding legend Flex Wheeler, fans can expect an even more dangerous Bonac at the 2022 Mr. Olympia contest.