"The Conqueror" plans to bring more size when he squares off with reigning Mr. Olympia Big Ramy this year: "it was the only thing that I was missing" 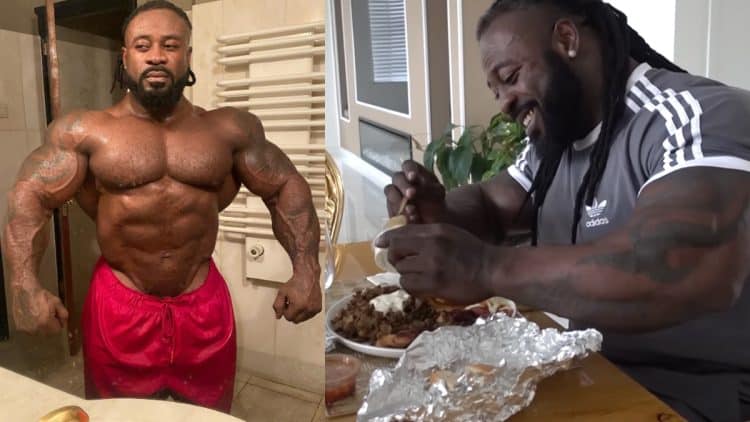 Bodybuilder William Bonac is laying out the groundwork for how he plans to defeat reigning two-time Mr. Olympia Mamdouh ‘Big Ramy’ Elssbiay. In a recent video, Bonac revealed his plan of being ‘as heavy as possible’ to combat the size of the champion at this year’s 2022 Mr. Olympia contest.

“We have to do something different in order to get a different result,” says Bonac after discussing his potential at 2022 Mr. Olympia.

Bonac made a name for himself in the IFBB Pro League with grainy conditioning and impressive muscle density. He’s battled against some of the sport’s best and has come close to securing a Sandow trophy. In 2019, Bonac earned second place to Brandon Curry at Olympia.

Undeterred from the loss, he regathered himself the following year and was crowned champion at the 2020 Arnold Classic. While he attempted Olympia in the same calendar year, many believe his lack of lower body details contributed to a fifth-place finish. Then, Bonac walked away in sixth place at 2021 Mr. Olympia.

The route to this year’s 2022 Mr. Olympia contest has been littered with challenges for William Bonac. Some in the community began to write William off as a serious Olympia contender, but he proved he still had a lot of gas left in the tank at the 2022 Arnold Classic. He brought what was perhaps the best package of his career to Ohio, however, found himself in second place to a familiar foe in Brandon Curry.

In the aftermath, many thought Bonac did enough to win the AC title. According to some veterans in the bodybuilding community, William was marked down by the judges due to his Gynecomastia (a male hormone imbalance that causes enlarged breast tissue) as well as a cloudy midsection.

A week after the Arnold Classic, Bonac earned his Olympia qualification by winning the 2022 Boston Pro event. During his victory speech, Bonac vowed to fix his ‘gyno,’ and clarified that he doesn’t want to make any excuses when he brings his best to the Olympia stage in December. Given the size of Big Ramy, a number of Men’s Open competitors believe adding muscle mass is their ticket to success.

Earlier this year, former Mr. Olympia Curry revealed his plan was to add extra weight to combat Ramy’s crazy size on stage. Now that Bonac’s gyno is taken care of, he plans to do the same — and made it clear he intends to bring his biggest and best look to the stage in Sin City later this year.

William Bonac Weighing 260.8 Lbs, Plans to Be ‘as Heavy as Possible’ to Dethrone Ramy at 2022 Olympia

In a recent YouTube video, Bonac discussed his plan of attack for this year’s Mr. Olympia contest and said size was the ‘only thing he’s missing.’

“I have the feeling that today I’m going to hit my goal. Because my goal was to hit 120-kg, before we started the prep. So, we already had enough with the off-season prep. Now, my coach wants me to hit 120 kilograms. My [weight] is up to 118.3 kilograms — I just weighed myself before I left the house. Just had my shoes on, and I read 118.3. So, I have the feeling today… tonight, I’m going to hit 120-kg,” William Bonac shared.

To compete with the Open class ‘beasts,’ William intends to add size before taking his physique to the biggest show of the year.

“Size. Size is going to be different. The condition is not something that I have a problem with. It’s more the size. Now, I will have the size to be comparable with those beasts on stage, like the region’s champion Big Ramy. It was the only thing that I was missing probably.”

“A lot of people are saying, ‘no more size, your waist — blah blah blah.’ I’m like, ‘look at all these guys that are shorter than me building up muscles you know… so why can’t I do that. I’m just going to do it because we hit a point [where] we can’t go further.”

Bonac wants to be ‘as heavy as possible’ to leave no doubt with the Olympia judges.

“[I want to] gain extra muscles and try to be as heavy as possible or on stage, so we [can’t] be denied.”

After discussing his potential at this year’s Olympia, Bonac showed off a recent cheat meal he adores. The Open class standout revealed Shawarma as one of his favorites — a Middle Eastern dish made up of meat cut into thin slices, usually cooked on a slowly turning vertical rotisserie or spit.

“We’re just going to get some Shawarma. I like Shawarma you know. Some chicken wings — roasted chicken wings. Maybe one strawberry burger, it’s not too fatty. It’s not like a burger. A burger would be about 500 or 600 calories for one burger. I think with the shrub or bread, it will be maybe half of it, 300 or 400 calories. I don’t know for sure. It’s not really fatty,” says Bonac.

“Since I start working with Chad [Nicholls] — it’s just clean food. I wish we did that, but we don’t. I was struggling to get my meals in at a lot of times, especially after the bleeding [from the Gynecomastia surgery] it’s hard to get your appetite back and eat three times or even twice as much as you’ve been eating.”

“This is my cheat meal. It’s called Shawarma. It’s our French fries, some chicken wings, and this pita bread. This is Turkish bread, coconut sauce, pepper, salad, [and I’m] eating this oatmeal sauce. The spice, the smell… haha I like it. I like to eat my Shawarma without milk sauce,” says Bonac.

This isn’t the first time that Bonac has given fans a taste of his bodybuilding diet. Back in July, Bonac shared his bulking diet in preparation for 2022 Olympia. It consisted of five protein-packed meals. Further details about his diet can be found here.

Preparations are heating up for all athletes who have their eye on 2022 Mr. Olympia. Judging by Bonac’s latest admission, he is on track size-wise to deliver one of the most memorable packages of his career.