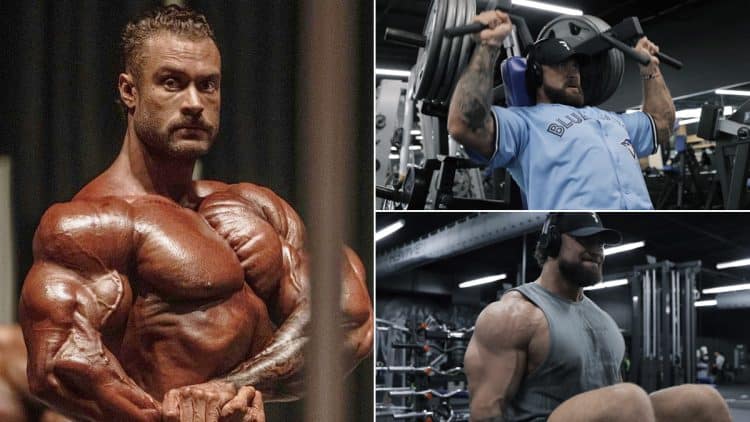 The reigning Classic Physique Olympia champion Chris Bumstead is currently in the off-season, but that should change soon as the 2022 Olympia is less than 19 weeks away.

CBum dethroned Breon Ansley in 2019 to conquer the Classic Physique Olympia throne. Since then, Bumstead has returned every year to defend the title with a better physique, outdoing his competition by a margin.

Last year, he suffered a major health setback when COVID-19 got the best of him. As a result, he lost a significant amount of weight. However, the Canadian got back on the bandwagon with a 5,000-calorie diet as soon as he recovered.

On July 23, 2022, Chris Bumstead shared a shoulder routine on YouTube, which he originally did on July 20, explaining some exercise choices and also giving an update about his current physique.

The Canadian bodybuilder performed the exercise on a slight incline to better isolate his anterior deltoids.

Bumstead started the workout with the dumbbell shoulder press. He stayed true to the title of the workout video — heaviest dumbbell press ever — and hit a 140-pound PR (personal record) on the exercise.

“I will train shoulder press, like 140 pounds. We’ll see. I feel like I can do it. If you believe, you can achieve,” said the reigning Classic Physique Olympia champ before hitting eight reps with the 140s.

He began the exercise with 90 pounds, moved to 140 pounds, but dropped to 130s for the final set.

After completing the dumbbell press, Bumstead moved to the machine shoulder press.

After achieving a satisfactory pump on the machine shoulder press, CBum moved to a superset next.

“Still skinny, but we’re getting somewhere. I was 259 [lbs] this morning. So, weight’s coming back. I feel like if I put on five more pounds, I’ll be at the heaviest I’ve ever been. This is the leanest I’ve been in an off-season.”

Bumstead moved from dumbbell lateral raise and cable rear delt fly to the machines for the final shoulder exercises of the routine.

Following his shoulder routine, Bumstead turned his attention towards his core with leg raises.

“If anyone has any tips on how to do abs, please let me know. I just did two sets of 10 and the cramp I get in my abs, it literally curls in and sticks out.”

He plans on training his abs more often as he will soon begin prep for the 2022 Olympia.

Chris Bumstead should venture into his 2022 Olympia prep soon. The event is scheduled for Dec. 15-18 in Las Vegas, NV.

After undergoing stem cell injections, Chris Bumstead is set to push his body to the limit during Olympia preparation. Intending to secure his fourth Classic Physique Olympia win, the reigning champion is leaving no stones unturned in hopes of bringing his best package to the stage later this year.