Dan Solomon says fan can expect a 'devoted' Big Ramy at 2022 Olympia after their phone call: "he is ready to do the work and I think he's more motivated than ever." 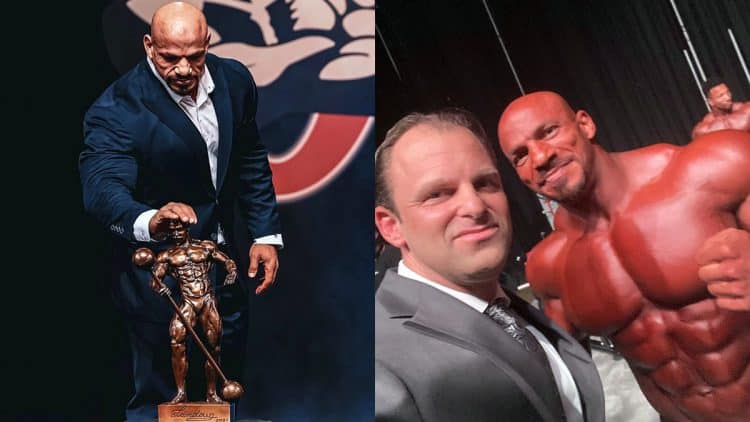 With preparations beginning to heat up, Olympia President Dan Solomon had plenty to say about the two-time Mr. Olympia champion Mamdouh ‘Big Ramy’ Elssbiay. In a recent video, Solomon gave his thoughts on Ramy and the mentality necessary to remain on top in a sport as difficult as bodybuilding.

Big Ramy’s career skyrocketed two years ago, when he placed third place at the Arnold Classic before dominating at 2020 Olympia with impressive size, muscularity, and conditioning. After earning the highest distinction in bodybuilding, Ramy was determined to replicate that success and did so at the 2021 Mr. Olympia contest. He earned first place once again, defeating the likes of former Mr. Olympia Brandon Curry and Hadi Choopan.

In May, Big Ramy was expected to guest pose at Jim Manion’s annual 2022 Pittsburgh Pro show. After he was unable to fulfil the obligation, speculation intensified as many questioned Elssbiay’s commitment to the sport. Popular 212 competitor Derek Lunsford guest posed in Ramy’s place. After no showing the event without an explanation, the Egyptian native apologized directly to Manion weeks later in an online video.

Olympia President Dan Solomon had a phone call with Big Ramy last month to discuss the champion’s drive and passion to continue bodybuilding. One of Solomon’s biggest takeaways was that Ramy is determined to prove his naysayers wrong and win his third Mr. Olympia title this winter.

Ramy also took to social media recently and shared his plan to retire at 38 years old and said his last Olympia contest will likely take place in 2023. While some have doubted Ramy’s commitment to the sport, Dan Solomon isn’t one of them.

Dan Solomon: “Getting to the Top is Hard, Staying on Top is Infinitely Harder”

Taking to the Olympia TV YouTube channel, Solomon discussed Ramy’s commitment to the sport after revealing he had another phone call with the defending champion.

“Well, for starters, I did speak to Ramy a few days ago. We had a really nice chat. You know, I always feel like there’s moments in life when you have two choices: you can either judge someone or you can have a level of empathy and try to understand what’s going on.

I really try my hardest in just about every situation that I’m in to try to understand and typically when we hear stuff through the grapevine, things are reported… most of the time it’s only half truths. In this particular case, I did reach out to Ramy because I wanted to hear from him and how he’s doing.” Dan Solomon shared.

Solomon believes it’s ‘really easy’ to be critical and judge but explained there are stories behind why Ramy was absent in Pittsburgh.

“As Jay can relate to some degree, these folks who compete in our Olympia, you know we’re all a family, especially the champions. We get closer to our champions over the course of the year because of promotion and marketing. I think it’s really easy to sit back and be critical and to judge and to do all that but as Jay knows, Derek as you know, there’s stories behind all of this.”

The Olympia President stressed that elite competitors like Ramy have special ‘wiring or DNA’, prompting them to devote their lives to one of the most ‘difficult’ disciplines in the world.

“You don’t become the best in the world or you don’t start on this journey unless there’s something in your past that took you down that path, that made you want to suffer and devote your life to maybe one of the most difficult disciplines in the world.

There’s no sport that asks as much of the competitor as the sport of bodybuilding does. It’s relentless. To take on that lifestyle, there’s usually things that are in the wiring or in the DNA of that individual that set them down that course to begin with. Then, once you’re in it, getting to the top is hard, staying on top is infinitely harder as Jay will tell you.”

Given that Ramy lives in Egypt, Solomon added that he doesn’t know his exact circumstances or why he chose not to attend the Pittsburgh Show.

“It’s really tough, so when I saw what Ramy was going through, I know a lot of people were quick to criticize him and call him weak and call him any number of names, but my first thought is this is a hard thing that Ramy is doing. He’s in a different part of the world. I don’t know his circumstances.”

Solomon on Big Ramy: “He’s Clearly Devoted to Getting Back to This Year’s Olympia”

While many suspected Ramy was on his way out of the sport, Solomon countered that notion and said he’s more motivated than ever to earn a third Sandow trophy.

“I’ve gotten to understand a lot of the challenges that athletes face in all parts of life. So, that was sort of what I brought to that conversation with Ramy. Ramy sounded a whole lot better than I thought he was going to sound. He’s clearly devoted to getting back to this year’s Olympia, he wants to win a third Sandow. He said his team is ready to get to work and if he had a couple weeks where he got sidetracked and he had to deal with some personal matters and the reason why there called personal matters is because their none of our business.”

Solomon said Ramy is finalizing his strategy for this year’s prep. The Olympia executive explained that if someone doesn’t like Ramy or the way he conducts himself as champion, everyone should respect what he’s done in the sport, nonetheless.

“If he had to deal with some stuff or had some stuff going on in his life, I respect that and hope everyone else would and now he’s trying to dig in and start to finalize his strategy to get ready for this year’s Olympia.

There was nothing in that conversation that made me feel too concerned. I felt like Ramy is in a place where he is ready to do the work and I think he’s more motivated than ever.

My hope is that all of his fans will continue to support him and get behind him. Whether you want to root for him or against him, that’s up to you but certainly you should respect him, and what he’s trying to do and the challenges that he faces in doing that.”

According to Ramy’s coach Dennis James, he says Elssbiay’s Olympia preparations are going according to plan. Earlier this month, James revealed that the reigning Mr. Olympia was weighing 152-kilogram (335.1-pounds). 2022 Olympia is expected to be one of the most competitive contests in the show’s history. In addition to Curry and Choopan, mass-monsters Nick Walker and Hunter Labrada intend to push Ramy on stage.

Staying on top of a sport like bodybuilding is no easy feat, as it takes dedication to following a diet, training and supplement protocols. With months to go until the competition, Solomon believes Big Ramy is more motivated than ever to earn his third Olympia crown.