Chris Bumstead works around a quad injury with a unique solution as the 2022 Olympia prep continues. 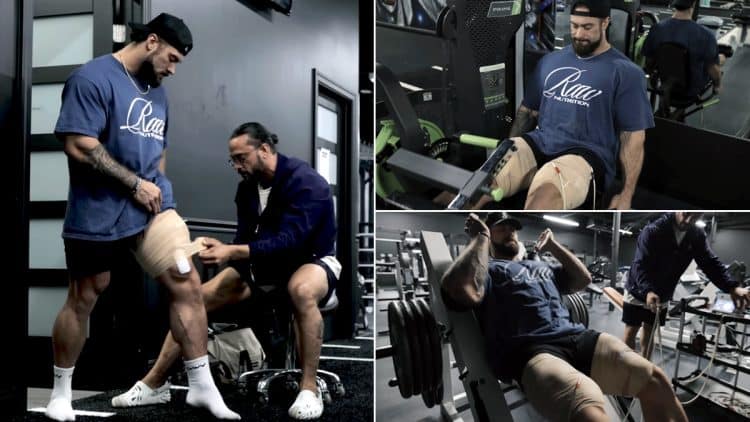 Bodybuilder Chris Bumstead is steering effortlessly around many difficult circumstances in his 2022 Olympia prep. Bumstead is one of the most famous and successful bodybuilders of this era. He competes in the IFBB Pro League’s Classic Physique division and has won the Classic Physique Olympia crown three times – at the 2019, 2020, and 2021 Olympia. ‘CBum’ will attempt to secure his fourth consecutive win at the 2022 Olympia and his competition prep is going on at a relentless pace.

Recently, Bumstead shared a unique quads workout on his YouTube channel. In this video, he also shared glimpses of a Q&A session where Bumstead answered a lot of questions about bodybuilding and fitness.

CBum stated that he injured his quads during the last quad-day workout. The injury worsened further on the very next hamstring day while doing Lunges. The purpose of this training session was to work the quadriceps without intensifying the injury. CBum and his trainer Eddie did this with an Electric Muscle Stimulation (EMS) machine. While speaking about how it works, Chris Bumstead said:

“It’s like an electric shock machine that you wrap around your legs when you train and it tenses the muscle, contracting the muscles harder without putting the strain on the injury. So I am going to try that out and see if it kills me and save my knee for a workout. Also, get some blood in there, hopefully recover better and also get some big legs…”

For the warm-up exercises, Eddie installed four electric stimulation devices connected to the EMS machine on Chris Bumstead’s injured leg and wrapped both his legs up firmly.

Eddie explained that the EMS machine ‘taps really well’ into the nervous system and helps people to enhance performance with or without an injury. However, more people are opting for it to deal with injuries in recent times according to him.

“It recruits a lot more muscle fibers than you normally do. So we’ll be able to get away with using less load,” Eddie stated.

Chris Bumstead fired up his quads with this isolation movement first. The knee joint is crucial in performing most lower-body movements. In addition to working the quads, the leg extensions are an excellent way to warm up this joint as well. Eddie set the machine frequency at a different level for both legs. While devices attached to the injured leg had a higher frequency for added assistance, the ones attached to the other leg were at a lower frequency.

CBum next took to the hack squats to work the quads further. This movement targets almost all the muscles in the lower body and significantly reduces the stress on the lower back. While the quads are the primary target muscle of this exercise, it also works the hamstrings, glutes, and even calves. Bumstead and Eddie experimented with the machine’s frequency to better suit the amount of weight and cranked out a few good sets of hack squats to work the legs.

Bumstead next took to the hip press and admired the electric shock machine’s ability to adjust to the body and build up the tolerance slowly so he could do the exercises without experiencing pain or discomfort in the injured leg.

Eddie later explained that the higher frequency is used to open up the muscle tissues while the lower frequencies tend to shorten the muscles and get a good contraction.

The Classic Physique Olympia champion performed this exercise as the finisher of his quads workout.

Following the exercise, he stretched his quadriceps by elevating his rear foot on a chair. CBum concluded the training session by working his calves.

Chris Bumstead’s 2022 Olympia prep has been marked with some less-than-ideal circumstances. Right before the beginning of his prep, Bumstead stressed his knees while playing basketball and this recent quad injury is also an unnecessary hurdle in the prep journey. Additionally, Bumstead called an end to his client-trainer relationship with longtime friend Iain Valliere for the latter to be able to focus on his own bodybuilding career. Famed bodybuilding coach Hany Rambod is now training the reigning Classic Physique Olympia champion for the biggest event of the year.

In spite of these circumstances, CBum is continuing to make progress in the gym. It will be interesting to see the extent to which these injuries affect his performance at the 2022 Olympia.

8 Dumbbell Lat Exercises for a Wide and Thick Back