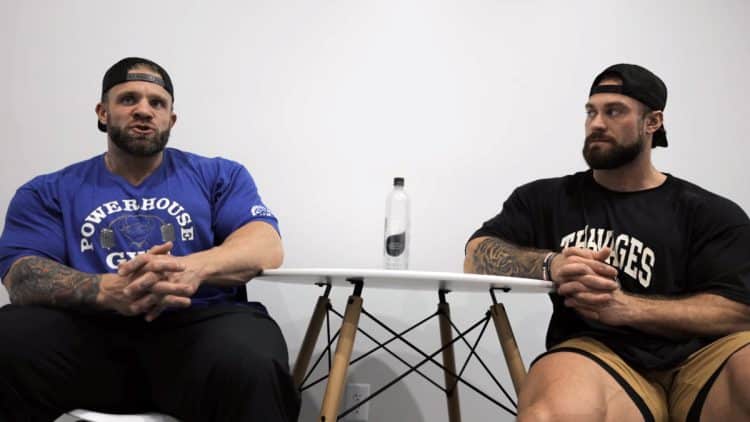 Bodybuilders Chris Bumstead and Iain Valliere made an important announcement during a lower body workout. Bumstead is a Canadian IFBB Pro bodybuilder and the reigning Classic Physique Olympia champion. He will attempt a fourth consecutive win at the 2022 Olympia this December. Cbum won the title by defeating former champion Breon Ansley at the 2019 Olympia and defended it in 2020 and 2021.

The 27-year-old phenom was trained so far by Open division competitor and longtime friend Iain Valliere in his quest for achieving greatness. Valliere is a two-time Mr. Olympia participant that finished seventh at the 2020 and 2021 Olympia. He earned his 2022 Olympia qualification by winning the 2022 Vancouver Pro in July. Valliere grabbed the headlines recently when he took issue with reigning 212 Olympia champion Derek Lunsford getting a special invitation to compete in the Open division at the 2022 Olympia.

Bumstead and Valliere went through a quad-focused leg workout at the Revive gym on October 13th. The video of this session was uploaded on his personal YouTube channel. So without further delay, let’s take a closer look at the detailed account of this session.

At the beginning of the video, Bumstead stated that the upper quad is a relatively underdeveloped area of his lower body and the goal was to train this specific area in this training session.

“The goal is to build my upper quad right now because I didn’t contract that for two years because I squatted very egotistically…” Bumstead said.

Bumstead and Valliere started the training session with this isolation movement to warm up the quads and knees. They did the warm-up set on a selectorized machine and switched to a plate-loaded machine to load the quads with heavier weights. The duo performed two to three working sets on the plate-loaded machine maintaining a high rep range and took to the next movement.

The Canadian bodybuilders next took to the first compound movement of the day and did hip press. Before starting this exercise, Bumstead spoke about the squatting mistakes he made earlier in his career and said:

“I squatted wrong my whole life. It’s not actually wrong obviously. But I started favouring where I was tight and where I was strong. It was like squat, hold (at the bottom) and bouncing back. During that bottom half of my rep I was losing the tension on my quads. So I’m really trying to slow it down.”

They performed a few sets of hip press with slow and controlled movements and moved on to the next exercise.

Cbum and Valliere next performed linear hack squats to work the lower body. It is a compound movement that works the majority of lower body muscles including hamstrings, glutes, and calves. However, it activates the quadriceps to a greater extent and takes away the stress from the lower back. The bodybuilder duo did a few sets on this machine with heavy weights and jumped into another compound movement.

The Canadians next targeted the quads with unilateral leg presses. Performing the exercise with one leg at a time helps remove the strength imbalance that may exist in the limbs. Bumstead and Valliere performed a few sets of this movement and wrapped up the quad exercises.

The seated variation of calf raises works the Soleus muscles that lie underneath the gastrocnemius muscles in the calves. Bumstead and Valliere did a few sets of this exercise and wrapped up the training session to make an important announcement related to their careers.

Iain Valliere will not coach Chris Bumstead for the 2022 Olympia

Iain Valliere has trained Chris Bumstead so far in his bodybuilding career. However, Bumstead stated that Iain, and he will not be working together as a coach and client for this year’s Olympia. The Classic Physique Olympia champion then explained that it was not an easy decision to make. However, they had to go through with it for Valliere to be able to focus on his own competitive bodybuilding career.

“My gratitude for what we’ve done. But it’s hard to coach someone. It’s almost more stressful sometimes because you take on the stress and the responsibility of telling them what to do so they don’t have to think,” Bumstead said.

“Imagine doing that while also being the competitor at the Olympia as an equal priority but something very important to you. Climbing up the ranks in the Open bodybuilding in that F***ing Olympia, qualifying and also coaching a three-time Mr. Olympia… It’s crazy!” CBum added.

Bumstead further stated that it was a difficult conversation for both of them. Bumstead admitted that it was Iain Valliere that got him into bodybuilding in high school and attributed a large part of his success to their relationship. Valliere has trained CBum for a really long time and it is ‘scary’ for Bumstead to face this change.

“But we’re both at a point in our careers where our priority is our relationship. He’s not passionate about coaching. He was coaching me because we’re brothers and it’s worked.”

Together, they chose a path that would benefit both parties. Iain validated Bumstead’s explanation. CBum opined that it is in the best interest of everybody to end an association at the top without hurting the legacy. He feels happy for ending the coach-client relationship with Valliere at a point when he has a solid legacy of two runner-up finishes and three Mr. Olympia wins pretty much intact.

“There’s not a lot of room to compromise. Especially when you’re talking about Chris defending for a fourth time. There’s a lot of upcoming guys. He needs a hundred percent full attention. I think I also need to have my mind hundred percent on myself as well. So it’s absolutely the best decision for both of us.”

While there is a rumor that famed bodybuilding coach Hany Rambod might train Bumstead to retain the Olympia Classic Physique title, CBum has not made an official announcement. Chris Bumstead and Iain Valliere will go into the 2022 Olympia with the goal to build up on their legacies. Valliere has assured CBum that, despite not coaching this season, he is available to assist in any way he can. It will be interesting to see how things play out.