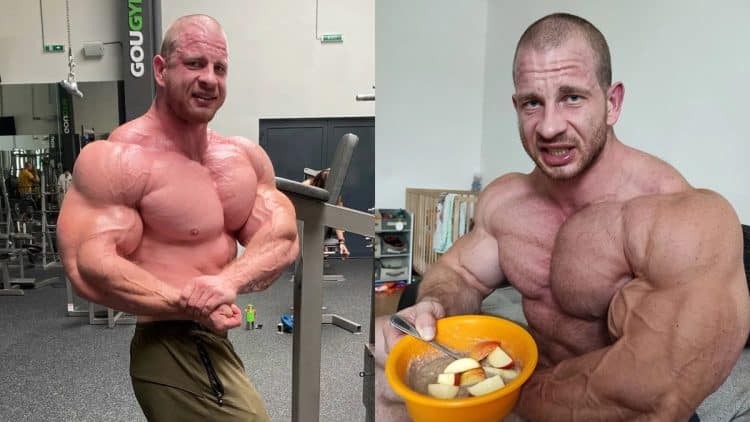 Michal Krizo, the latest mass monster to arrive in the NPC, gave his honest take on a number of issues including where he thinks he will place at 2022 Olympia, should he qualify in time. In a recent Q and A video, Krizo revealed his training split/supplement stack and predicted a top 10 finish at this year’s Olympia contest.

Slovakia’s Michal Krizo has established himself as a threat in the Men’s Open division despite having yet to earn his Pro card. He gathered steam quickly in the bodybuilding community after switching to the NPC. The transition prompted Krizo to visit a couple of high-profile bodybuilding meccas, which started at the Bev Francis Powerhouse Gym, located in Syosset, New York.

His next stop saw him pose in front of respected bodybuilding coach Milos Sarcev. “The Mind” was taken aback and complemented Krizo’s massive physique. He also stated that Krizo will have a huge impact on the Open class when he takes his talents to the IFBB Pro League.

Michal Krizo didn’t stop at the Dragon’s Lair Gym; he visited bodybuilding legend Jay Cutler next. Similar to what Sarcev saw, Cutler labeled Krizo as ‘highly dangerous’ even though he’s yet to earn a Pro card. Furthermore, Cutler added that Krizo had muscle striations that remind him of seven-time Olympia winner Phil Heath.

With the impact Krizo has already had in the sport this year, the bodybuilding standout sat down for a Q & A to discuss a number of critical issues affecting his bodybuilding season, like diet, training splits, supplements, and his 2022 Olympia aspirations.

Michal Krizo on Supplement Stacks and Training Splits: ‘We Decide What Suits Me and What Doesn’t’

During his latest Q & A segment, Krizo discussed what supplements he uses.

“My favorite is of course — the protein powder,” Krizo shared. “Yes [rice porridge] we can mention that too. Rice porridge, peanut butter, then vitamins. C, D, Magnesium, Ashwagandha. I take Glucose during the workout, the sugar dextrose, and that’s all. I take BCAA sometimes but it’s more for the taste. I put ice in it,” says Krizo.

The Open class standout suggested that his diet and supplementation are tailored to suit his specific needs.

“It’s a dialogue we have and then we both decide what suits me and what doesn’t. He never tells me you have to do this. That’s the biggest bulls**t in my opinion. You need to have a conversation. He tells you eat this and that and then you have to tell him if it suits you or not, if you need to change something and so on.

There are guys that tell you: eat this, and he will eat it even if he feels like crap by eating it and that’s a bad approach,” explained Krizo. “Once a week [I meet with my coach]. Of course, [we communicate] by WhatsApp. We are in contact all the time, almost every day.”

According to Krizo, he trains Monday through Friday and then takes the weekend off. He specified that quads are trained on Mondays, chest, and biceps on Tuesday, hamstrings, and calves on Wednesday, back on Thursday, and shoulders, traps, and triceps on Friday.

“Five days on, two days off. So I train Monday to Friday; I have Saturdays and Sundays off. I train quads on Monday. Chest and biceps on Tuesday. Hamstrings and calves on Wednesday. Back on Thursday and Friday I train shoulders, traps, and triceps.”

What Place Will Michal Earn at 2022 Mr. Olympia if He Qualifies?

Michal Krizo believes he has the potential to place in the top 10 at his first Olympia contest. After being asked about his weaknesses, Michal said he has none and clarified that athletes can’t talk about them otherwise people focus their attention on them.

“I don’t expect anything but if I qualify this year, I would like to place in the top 10. And next year — at least in the top six,” Krizo shared. “We don’t talk weaknesses. Exactly. I have no weaknesses. You can’t talk about that otherwise people will focus attention to it.”

Krizo revealed that originally his plan was to study sales and tourism. After being accepted into a number of schools, he eventually found bodybuilding and that became his passion.

Before concluding the discussion, Krizo shared how much weight he can squat, deadlift, and bench press.

As of this writing, Krizo intends to make a statement at the upcoming Amateur Olympia Italy contest in mid-October to earn his Pro card. If he is successful in that endeavor, he plans to win the EVLS Prague Pro show weeks later to stamp his ticket to 2022 Mr. Olympia.

Since switching to the NPC, Krizo has shared more details on how he prepares his physique for a bodybuilding contest. In addition to showing off a full day of eating, the 32-year-old also revealed that his current plan is to get as ‘big as possible,’ for the Olympia stage.

Michal Krizo plans on making the top 10 at this year’s Olympia contest, and the top six at next year’s. If he is able to earn his Pro card and win a Pro show, Krizo will be a huge threat to other competitors on bodybuilding’s biggest stage.