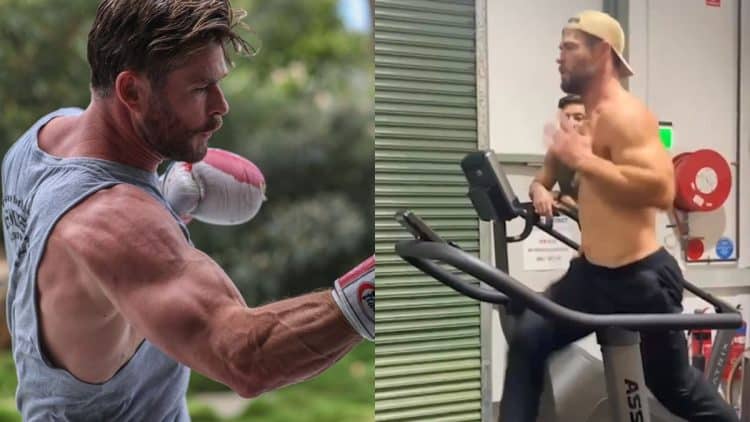 Chris Hemsworth is dedicated to maintaining a high fitness level in addition to being an actor. In a recent video posted on Instagram, Hemsworth looked shredded while performing a sprint training session.

Hemsworth grew up with a passion for fitness at a young age. While he was always athletic and in good shape, he developed a reputation in the industry with incredible physique transformations. His lead role in the Marvel film franchise Thor turned him into a bona fide superstar.

The 39-year-old Australian native packed on the pounds to portray the beefy superhero. As one of the most successful actors in town, Hemsworth never shies away from challenges. He adopted a leaner look for his role in the movie Extraction, where he depicted a mercenary.

Chris Hemsworth took his physique to the next level for Thor: Love and Thunder. He was required to add even more muscle mass to his frame and did so successfully without losing definition. He shared a behind-the-scenes photo from the sets of the movie showing off his insane bicep development.

The Australian A-lister has been working to expand his creative footprint in the fitness space. He launched his own fitness lifestyle app called CentrFit. He has shared minimal to no-equipment workout programs to promote the launch of the app. These were all performed from the top of a naval ship in the middle of the ocean. Last September, Chris shared the staple core workout that he utilized to keep his abs tight.

He followed that up with another grueling 200-rep workout challenge which consisted of five intense exercises. Hemsworth also showed off his punching skills with a heavy bag training session last October.

In a recent Instagram post, Chris Hemsworth shared a part of his sprint training session looking lean and mean while running on the treadmill.

“Nothing better than some sprint training to start your week,” he wrote.

Chris regularly gives his fans a sneak peek into his preparations for upcoming roles and likes to share what motivates him to stay fit. Sprint training is an effective way to work on explosive movements while also aiding with fat loss.

RELATED: Joe Rogan Questions Chris Hemsworth’s ‘Natty or Not’ Status: ‘For Sure USADA Isn’t Knocking’ on His Door

About three months ago, Chris Hemsworth unveiled a brutal full-body workout program that focused on getting pumped. The taxing circuit routine is sure to challenge most and needs only a dumbbell to execute. Hemsworth is focused on staying in shape as he eyes his next motion picture.