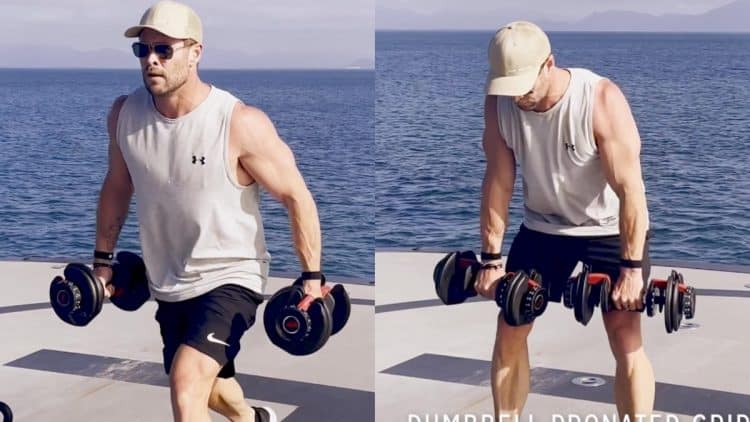 Chris Hemsworth grew up with a passion for fitness and entered the film industry boasting one of the best builds in Hollywood. In a recent post made on Instagram, Hemsworth shared a demanding full-body pump-up workout routine.

The Australian A-lister gained mainstream popularity for his starring role in the Marvel comic book film franchise, Thor. Hemsworth brought the fictional character to life in one of the most realistic portrayals of any superhero. He did not stop there as he continued to transform his physique for other projects.

Hemsworth followed an intense bodyweight training routine in preparation to play the role of a lean and athletic Black Ops mercenary in the movie Extraction. He revealed on Instagram that he didn’t lift free weights and instead worked on improving his speed, agility, and strength.

He recently made headlines for a behind-the-scenes photo he shared from the shooting of Thor: Love and Thunder. Hemsworth left the fans in awe of his massive bicep development.

Chris announed that he would be sharing workouts that require minimal to no equipment for the next few weeks to promote his fitness app. He intends on helping people with workouts that anyone can perform from anywhere.

As part of the series, Hemsworth encouraged his followers to try out the killer 200-rep workout challenge two weeks ago. It consisted of doing 200 repetitions each for five exercises that use the full body. Moreover, he has done all his workouts from the deck of a naval ship in the middle of the ocean.

In a recent post uploaded to his Instagram, Hemsworth shared an intense full-body workout routine for getting the body pumped.

“Time for a Full Body Pump-Up with @centrfit.”

Check out the full workout list below (for a total of 4 rounds):

Chris Hemsworth is one of the few celebrities who maintains his fitness levels year-round. He recently gave insight into his taxing go-to core workout routine that he used as a staple to keep his abs shredded. The whole session can be done without any equipment except for a medicine ball.

Hemsworth will look to wrap up the series shortly to complete his eight weeks of sharing workouts. He likes to diversify his training options and was also seen working on the punching bag to improve his conditioning as of late.