Check out the grueling workout Chris Hemsworth uses to celebrate Australia's Father's Day with his dad. 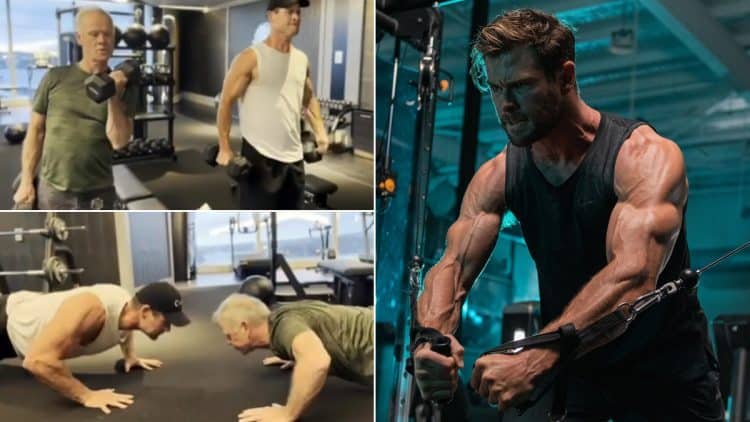 Chris Hemsworth is one of Hollywood’s busiest actors, though his passion for exercise has also elevated his name in the world of fitness. In a recent Instagram post, Hemsworth joined his dad for a demanding workout in honor of Australia’s Father’s Day.

Chris Hemsworth has developed quite a reputation in the fitness community. He’s accustomed to transforming his physique for movie roles. In preparation for the film, Extraction, Hemsworth had to add a dramatic amount of muscle mass to play a Black Ops Mercenary. During production, the Australian actor revealed that he incorporated bodyweight training to facilitate his physique transformation. Specifically, the 38-year-old focused on speed, agility, and strength instead of using free weights.

He is well known for his contributions as Thor in Marvel’s Cinematic Universe. Of course, to play Thor, a muscle-bound physique comes with the territory, which Hemsworth accomplished with intense training and dieting.

According to his fitness coach Luke Zocchi, the Hollywood heartthrob was forced to eat a whopping 10 meals a day to maintain adequate muscle mass. It appears the training and diet paid off too, courtesy of the behind-the-scenes Thor photo that highlighted his jacked biceps.

Fitness and the Hemsworth family go hand-in-hand. Earlier this year, Chris joined his brother Liam Hemsworth for a grueling Pilates training session. Chris described the experience as ‘brutal’ and recommended Pilates for anyone seeking a demanding core workout. For today’s session, Hemsworth joined forces with his father to tax the entire body.

During the workout, Chris reflected on what fitness has done for his family, which can be found in the caption of his post. Despite living on a steep hill, Hemsworth’s dad helped him train to compete in a track and field 110-meter hurdle contest.

“Some of my greatest memories from when I was a kid are training with my dad. I used to compete in the 110m hurdles but didn’t have enough space to train as we lived on top of a very steep hill.

My dad built me a single hurdle out of timber and I used the 15 meter driveway we had to practice over and over again. Just he and I till the sun went down havin fun, havin a laugh. I got 2 state medals with his help.

Consumed with nostalgia, Chris Hemsworth remembered his dad making him a hurdle made of timber to practice with. Twenty-five years later, Hemsworth is still pursuing fitness goals in the company of his father. Chris’ passion for exercise hasn’t waned — he even created a health and wellness app called Centrfit to help him share/reach his fitness goals.

To stay fueled during workouts, Hemsworth showed off a caffeine-based smoothie recipe that he regularly uses before/during training sessions. He blends ice, frozen bananas, oats, protein powder, coconut coffee, cacao, and almond milk to create a smoothie that will provide him with sustained energy throughout the day.

Despite sporting one of the fittest physiques in Hollywood, Hemsworth’s dad was still able to keep up with his son. Judging by Chris’ latest workout, he’s determined to keep the muscle mass he gained for his role as Thor in the latest installment of the series, Thor: Love and Thunder.

Dennis James on Coaching Big Ramy for 2022 Mr. Olympia: ‘I Guarantee You, This is Going to Be the Best Ramy Ever’