"The Mutant" updates his fans about his diet in the workout video with Kamal Elgargni. 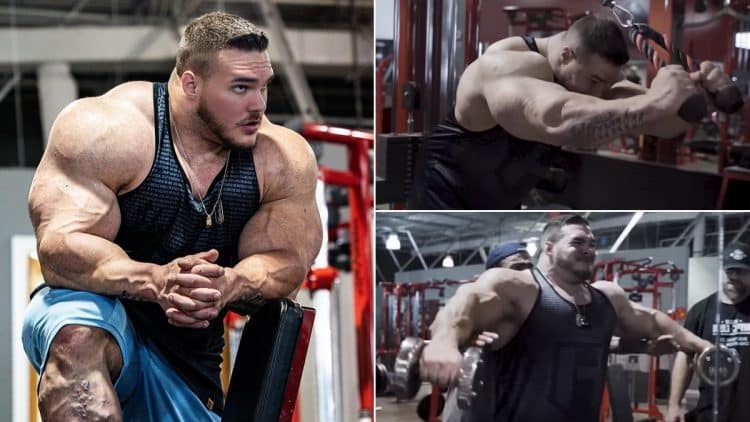 Bodybuilder Nick Walker recently shared a high-volume shoulder and triceps workout. After winning his Pro card at the 2020 North American Championships, the 27-year-old made his pro debut with a fourth-place finish at the 2020 Chicago Pro. He then went on to win the 2021 New York Pro, punching his ticket for the 2021 Olympia. Walker won the 2021 Arnold Classic and placed fifth at the 2021 Olympia later that year. He took time off to improve his physique and chose not to defend his AC title in 2022.

A few weeks ago, The Mutant began preparing for the 2022 Mr. Olympia, and he’s kept bodybuilding fans updated. With 2019 212 Olympia champion Kamal Elgargni, Walker worked on shoulders and triceps. Kamal intends to reclaim the title from Derek Lunsford When they meet later this year at the biggest bodybuilding show. The seventh training session of Walker’s Olympia prep series was uploaded on YouTube.

Below is a breakdown of the workout session.

Walker started the workout with this movement to work the lateral deltoid head. This movement also served as a warm-up exercise for the shoulder joint. After performing a few sets of this movement with slow and controlled motion and moderate weights, Mutant jumped into heavier sets.

This became the first heavy exercise of the shoulder routine. The seated shoulder press eliminates the need to stabilize the core as the back is supported against the pad. Both arms of the iso-lateral machine move independently but along a fixed trajectory. In addition to reducing the chances of injury, the iso-lateral machine also helps eliminate strength imbalances between both sides of the body.

The Mutant went through some heavy sets of this exercise with the progressive overload principle and moved on to the next movement.

The benefits of dumbbell lateral raises for aesthetic improvements are undeniable. Plus, they are a potent movement to build shoulder strength independently. The Mutant cranked out some good sets of the lateral raise.

Walker next targeted the rear delts with this exercise. Rear delts are harder to activate compared to the front and lateral delts. The New Jersey native performed this exercise with a slight variation. Instead of sitting on the seat, he leaned his chest against the vertical pad and kept his legs straight. The 27-year-old finished a few sets of the reverse pec deck fly and proceeded to the finisher of his shoulder routine.

This movement served as the finisher of Walker’s shoulder workout. As the person performing this exercise is lying on an incline bench, the positioning causes the lateral and rear delts to work in sync. Additionally, this lateral raise variation activates the trapezius muscles. Walker performed a few sets of this exercise with slow and controlled movement to wrap up the shoulder workout.

Walker believes his arms respond the best to moderate weights and high volume. He adhered to this principle for the entirety of his arms routine.

As usual, Walker started his triceps training with rope pushdowns to warm up the elbow joints and arms. Elbows are a crucial joint in almost every arm movement, and warming them up to remain injury-free is extremely important.

Seated dips on a plate-loaded machine

Walker next took to dips. He performed this exercise in a seated position on a plate-loaded machine with the progressive overload principle before proceeding to the next movement.

Walker performed this exercise on the cable machine and called it a day.

Walker gave a quick update about his diet at the end of the video, revealing that his appetite has increased significantly during the off-season. However, he is getting lean with each passing day by making changes to his diet. Walker admitted that he feels ‘hungry as sh#%’, but he is able to cope with it. Training with Elgargni and Brammer is also helping him turn the competition prep into an exciting and fun affair.

The intrigue around Mr. Olympia is growing as the event gets closer. One thing is certain—it will be a fierce battle at the top of the Open division. Stay tuned to Fitness Volt for all the 2022 Olympia updates.