Dennis James on Coaching Big Ramy for 2022 Mr. Olympia: ‘I Guarantee You, This is Going to Be the Best Ramy Ever’

Coach Dennis James says Ramy 'is willing to be pushed' and is on track for one of his best Olympia showings of his career. 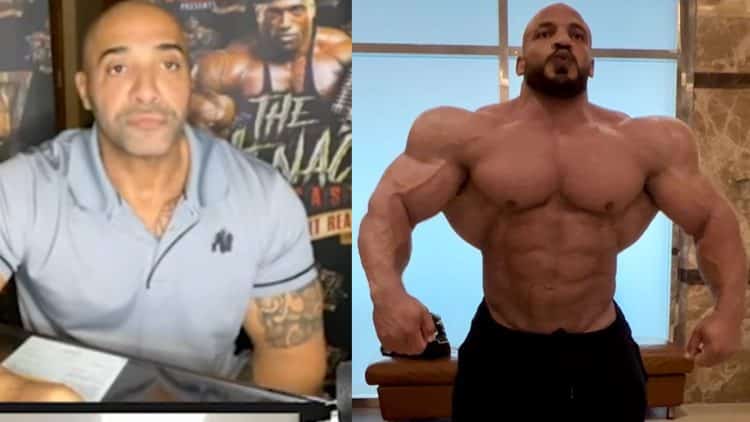 Bodybuilding coach Dennis James is highly confident in Mamdouh ‘Big Ramy’ Elssbiay as he eyes his third Sandow trophy at this year’s Mr. Olympia contest. During a recent podcast, Dennis James discussed flying to Dubai to coach Ramy and gave his thoughts on why he believes the champion is on his way to another title defense.

This year’s bodybuilding season for Big Ramy has been filled with ups and downs. In spite of his dominance for the last two years, many in the community began to question his resolve after Ramy failed to meet a guest posing obligation at Jim Manion’s 2022 Pittsburgh Pro show in May. Weeks after the mix-up, the reigning champion issued a formal apology to Manion and the IFBB Pro League.

Ramy’s commitment to the sport was brought into question when he revealed his plan was to hang up his posing trunks at 38 years old. The uncertainty prompted Olympia President Dan Solomon to speak with Ramy on the phone about his passion for bodybuilding. Following the call, Solomon said Ramy is reinvigorated and ready to ‘show the world’ who the best Men’s Open bodybuilder is at 2022 Mr. Olympia.

Many contenders for this year’s contest were starting to believe Ramy wouldn’t show up at his best this year, but the reigning champion put those presumptions to rest with a massive physique update last month. Big Ramy tipped the scales at 337 pounds looking lean and shredded.

With 15 weeks until the biggest bodybuilding show of the year, Ramy’s coach, Dennis James, flew to Dubai to ensure the reigning champion is on schedule for his next title defense.

Dennis James Highly Confident in Big Ramy’s ‘Next Level’ Physique: ‘The Pictures and Videos Don’t Do Him Justice’

In a recent podcast episode of The Menace, James discussed training Big Ramy and how surprised he was by the champion’s shape this far out from 2022 Mr. Olympia.

“I’m pushing him hard. He’s willing to get totally pushed. It’s surprising to me because it’s four months out and I could push him really really well. Ramy looks fuc**ng bad! I had him pose today again. The videos and the pictures do not do him any justice,” says Dennis James.

“Even though he looks impressive in the pictures and in the videos, in real life… it’s almost — it’s next level, I’d say,” James said. “He was training. He started training basically the day after Olympia. Remember, he went straight to the gym and he kept training.”

Dennis James is confident in Big Ramy’s chances at 2022 Olympia because he started training for the competition much earlier, unlike last year.

“He had days here and there where he had some issues going on, but all in all, he was training the whole time. Right now, he’s at a weight where he’s been before, but he’s never looked this good at this weight.”

According to James, Ramy is fully aware that he wasn’t at his best at 2021 Mr. Olympia. He added that trying to prepare for the contest in just three or four months made things even more difficult.

“No, he knows. He knows he wasn’t at his best. He was better Saturday, but he knows Friday he wasn’t on. He knows. He knows because there was over six months where he didn’t even train. So, three and a half, four months before the Olympia – trying to gain all that muscle back and get into shape at the same time — that’s not possible.”

While visiting Ramy in Dubai, Dennis said that the reigning champion is struggling to activate parts of his back, most notably, his trapezius muscle.

“His back is better… but of course, there’s some muscle [on his back] that is atrophied. We went to this South Korean guy yesterday, he does active release therapy,” Dennis added. “So listen, I explained it to him, I had him do a back double bicep and I showed him. It used to be there. He thinks it’s coming because of the traps. Somehow this [his back] isn’t firing.”

“The thing is, because his lower back is so powerful, and then his traps — the problem is, they’re not firing. It’s somehow not firing. I remember in 2013, 2014, that was all there. All of sudden, where did it go? That’s our focus. The back, of course. His tris are much much better and his arms are back to being full.”

In spite of his back issues, Dennis believes 2022 Mr. Olympia will see the ‘best Ramy ever.’

“So, Dennis – last time I criticized that electric stimulator newbie machine right, I said I didn’t like people being hooked up and training with it. In this instance, I would just be open minded to try it, to put the pads all the way low, and maybe the motor units over there, they’re dead or something to revive them. That’s kind of the only rehab [tool] I like to use, maybe try it,” Milos Sarcev said.

Sarcev told Dennis that he ran into a similar problem while coaching Men’s Open competitor Regan Grimes. However, judging by Regan’s latest back update, they were able to fix the problem.

“In this type of situation when the muscle fibers for some reason are not firing, because they are not exactly… the back double biceps for Regan [Grimes]. These are the kinds of things that I would be open minded right. Does it make sense? Well… in this instance, it could make sense,” Milos said.

Next, Dennis discussed some possible threats to Ramy’s title this year. In particular, he sees William Bonac being a problem as long as he brings the same conditioning that he brought to the 2022 Arnold Classic and Boston Pro.

Sarcev agrees with Dennis about Bonac and said his striations and muscle density are some of his greatest weapons. “The Mind” considers Nick Walker a threat as well but doesn’t believe Walker will have the tools to defeat Big Ramy.

“Even Regan was looking at him like a big fan. He was crazy. The striations upon striations, the thickness, it was oh my God. This veteran of the sport that has everything. William can mess people up.

Nick Walker, I mean again, Nick Walker is super confident that he can come in and even take the title. I love his confidence. I don’t think it’s gonna happen. Then again, I didn’t think much of him for the [2021] Arnold Classic. Then, he showed up at the Arnold Classic, which he won, I said within 15 seconds of being on the stage – he dominated. He was the crystal-clear winner,” says Milos.

Milos added that Hunter Labrada could have a major impact on the Open class if he’s able to dial in his conditioning. Before ending the discussion, Sarcev also named Hadi Choopan and Samson Dauda as possible front-runners.

“Hunter Labrada never nailed the conditioning. It’s time for him to nail the condition. We all know Hadi Choopan will be in crazy condition. And Samson Dauda, we did some shows already, we know how to dial him in. He’s going to come in easily with 15 pounds more. He can be an x factor too.”

Sarcev isn’t the only decorated pro who believes Hadi Choopan could topple Big Ramy this year. Seven-time Mr. Olympia Phil Heath recently discussed the Open landscape and is confident either Hadi Choopan or Brandon Curry could dethrone Ramy if he leaves ‘the door open’ as he did in 2020.

RELATED: Dennis James on Enhanced Labs Contract Dispute: ‘They Tried to Go Behind My Back and Negotiate with Ramy’

The Men’s Open lineup is on track to deliver one of the greatest contests in Olympia history, according to bodybuilding legend Jay Cutler. Given Dennis James’ ability to push Ramy to the limits, the reigning champion is expected to bring his best look ever to 2022 Mr. Olympia.

Chest and Triceps Workout for Building Muscle and Strength