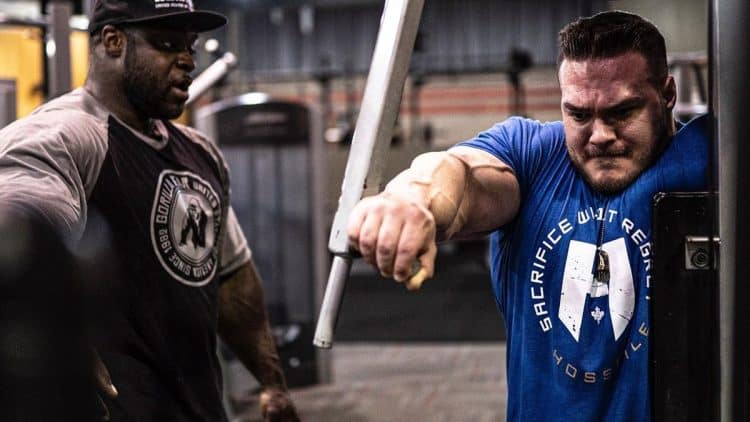 The reigning and former Arnold Classic champs, Brandon Curry and Nick Walker, recently joined hands for a killer shoulder workout. Curry and Walker are some of the foremost competitors in the IFBB Pro League Open division and will compete against each other at the 2022 Olympia, scheduled between December 15 and 18 in Las Vegas, NV. Curry is a perennial top contender in the Open division. In addition to winning the Sandow in 2019, the 39-year-old has two runner-up finishes (2020 and 2021) and a fifth-place finish (2018) at the Olympia under his belt. Curry last competed at the 2022 Arnold Classic, where he beat former champion William Bonac in a closely contested battle.

Nick Walker made waves by winning the 2021 New York Pro and 2021 Arnold Classic within a year of earning his pro card. However, following a fifth-place finish at the 2021 Olympia, Walker took an extended break from competition to develop his physique further. He recently kicked off his Olympia prep and will look to improve his standing at the grandest bodybuilding stage later this year in Vegas.

Nick Walker and Brandon Curry went through the shoulder workout in the Carbon Culture gym in Tennessee. The video of the training session was posted on Hosstile Supplement’s YouTube channel. While Brandon Curry is a part owner of this facility and has trained there before, this was his first time hitting shoulders in this gym. Nevertheless, being more familiar with the space, Curry led the workout while Nick Walker followed suit.

The bodybuilder duo started the training session with the single-arm reverse pec-deck fly. It is a classic exercise to build rear delts, which are relatively hard to target compared to the other two shoulder heads. At the beginning of the workout, Curry stated that he prefers to perform this movement unilaterally to get a full range of motion and maximum tension on the muscle.

The Mutant and The Prodigy performed a few sets of reverse pec-deck flys and moved on to the next exercise.

Machine Lateral Raise (with a focus on rear delts)

Curry explained and guided Walker through the second rear delt exercise—a modified version of the machine lateral raise. Unlike the regular lateral raise, a lifter performs this movement while bent over, which puts more emphasis on the rear delts.

The elite bodybuilders completed a few sets of this movement before jumping to the third and final rear delt exercise.

Curry and Walker wrapped up the rear delt work with dumbbell rear delt flys. The duo performed a few sets of this movement with perfect technique to finish a good day’s work.

The 2022 Olympia frontrunners then shifted their focus to working the medial delts and performed single-arm cable lateral raise. It is an isolation movement that works the medial delt heads. Therefore it is an effective way to develop the roundness and wideness in the shoulders.

The Arnold Classic champions performed seated dumbbell lateral raises as their second medial delt exercise. This too is an effective isolation exercise for building full and round shoulders.

Machine shoulder press served as the finisher for the duo’s training session. As opposed to the dumbbell shoulder press, the shoulder press machine moves along a fixed trajectory, eliminating the need to control the weight while performing the exercise. Therefore, this significantly reduces the chances of injury.

The Mutant and The Prodigy wrapped up the shoulder workout after a few good sets on the machine shoulder press.

The Mutant and Beefcake Shoulder Workout

Curry and Walker are at completely different stages in their careers. The Prodigy is a veteran of the sport and has been among the top bodybuilders for a while. On the other hand, The Mutant belongs to the next generation of up-and-coming talent that threatens to push aside the old guard. However, looking at their sense of sportsmanship and camaraderie, we hope to see healthy competition when Olympia returns to its home in Las Vegas after a long time later this year.

You can watch the full workout video here, courtesy of the HOSSTILE YouTube channel: