Gillon does a six-peat at the 2022 Olympia with her picture-perfect figure. 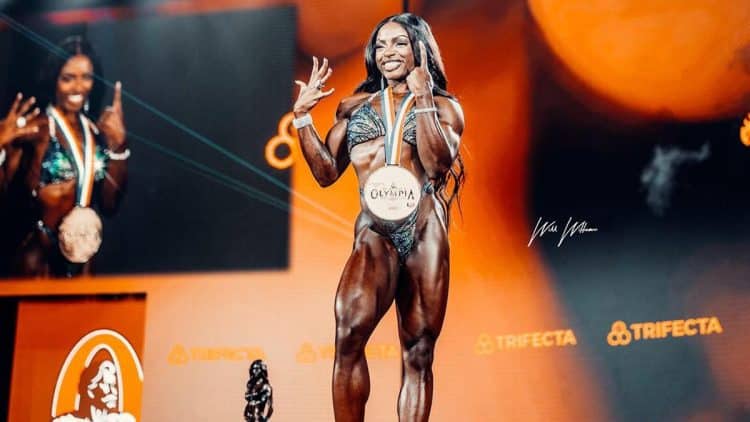 Joe Weider’s Olympia Fitness & Performance Weekend, scheduled between Dec. 15-18, 2022, returned to Sin City for its 58th edition after two years in Orlando, FL. The show consists of 11 divisions. While the competition in the other 10 divisions is airtight, many experts predicted Cydney Gillon to win her sixth Figure Olympia title at the 2022 Olympia, which she did quite convincingly.

39 competitors took to the 2022 Figure Olympia stage to challenge the reigning champ, Gillon. However, the six-time champ had done her homework and blew everyone out of the park with her perfect shape, balance, and conditioning.

Gillon has the perfect X-frame — broad shoulders, a tiny waist, and well-shaped legs. Gillon has a vice-like grip on the Figure division and shows no signs of slowing down. Besides her immaculate shape and balance, Gillon is known for her commanding stage presence.

Gillon established her superiority from the moment she step onto the 2022 Olympia stage. Gillon was joined by Jossie Nathali Alarcon Becerra, Lola Montez, and Jessica Reyes Padilla in the final callout in the pre-judging round. Padilla arguably came the closest to unseating the champ. However, the Fitness Olympia stalwart emerged at the top after the dust settled.

Born to bodybuilder parents, Gillon was drawn to the fit lifestyle from an early age. Gillon debuted at the Olympia in 2014, making this her ninth Olympia contest. She won her maiden Figure Olympia title in 2017 and has never looked back.

Besides being a competitive bodybuilder, Gillon is a successful entrepreneur. She runs multiple business ventures ranging from clothing to bodybuilding shows.

Jossie Nathali Alarcon Becerra, Lola Montez, Jessica Reyes Padilla, Natalia Soltero, and Gillon were the top five in the finals. Becerra surprised everyone by breaking into the top five on her debut.

In the Figure division, judges are looking for balance and shape, a flowing physique, if you will, with an emphasis on the hamstrings, glutes, shoulders, and back, and Gillon nailed all of it to win her sixth Fitness Olympia title.

Padilla, who finished fourth at the 2021 Olympia took home the silver medal at the 2022 Olympia, while Montez, who had placed ninth last year won the third-place at the 58th edition of the Olympia.

Check out the the top 5 results: