Preparations are ramping up for "The Boogieman," who will compete at his first-ever Mr. Olympia contest this December. 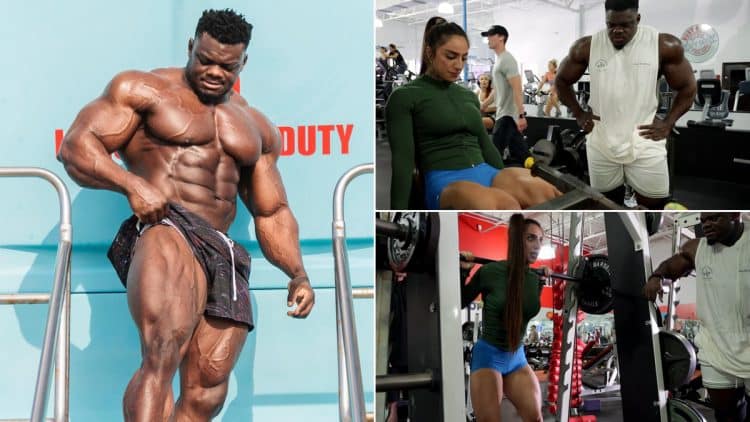 Bodybuilder Blessing Awodibu hopes to keep the momentum in his corner at his first-ever Mr. Olympia contest later this year. As part of his preparation for the 2022 Mr. Olympia competition, Awodibu goes through a brutal leg day training session with fitness model Bakhar Nabieva.

The 2022 season of bodybuilding was kind to Awodibu. He was out for redemption after failing to win a Pro show last year. Awodibu responded by winning back-to-back IFBB titles. He brought up his legs, which were criticized in the past, and managed to win the 2022 Indy Pro. Just a week later, Blessing returned and found success in first place at the New York Pro.

As a prominent Men’s Open competitor, Awodibu doesn’t shy away from rivalries. In addition to firing shots at Iain Valliere over whether judges should favor aesthetics more than size, he also got into a quarrel with rising star Michal Krizo. Blessing and Michal actually competed against each other at an amateur show in 2017. Awodibu was victorious in that affair, but Krizo is adamant things have changed.

To help Awodibu with his ambitious goals this year, he was joined by fitness influencer/model Bakhar Nabieva. In addition to her massive fanbase, Nabieva has established herself in the fitness sector with an amazing physique. While some fans would like to see her compete in bodybuilding again (as she competed once in the Bikini category), Nabieva appears content with just maintaining her shape at the gym.

Blessing Awodibu laid out the goal for his latest workout:

“Right now, when I hit legs, my goal is to be able to fully isolate both the left and the right quads. I’m just making sure I improved my imbalances. That’s why you guys see me focusing on each legs, one at a time. Doing split squats, lunges, all that stuff,” Blessing Awodibu said.

After going through the first two exercises, Awodibu explained why he likes this type of intense training.

“I like this type of training because it prevents you from ego lifting and also preventing injury you know. So instead of trying to push like six plates, seven plates for like — you won’t have the energy to, because the quads are already worked.”

Awodibu and Bakhar Nabieva pushed each other with Smith machine squats and on the leg press. They opted to use standing hip extensions as the finishing exercise. Awodibu completed one set and called it a day.

“It was great. This is the best part getting outside your comfort zone. I told her what my plan was today, and she’s like, ‘you know what, let’s do it.’ Of course, her training is totally different from mine. That was the first time doing something like that. Hopefully next time, she’s going to bring me through a workout. I probably won’t last,” Awodibu laughs.

In preparation for 2022 Mr. Olympia, Awodibu joined hands with bodybuilding legend Phil Heath. The two met up in late October to go through an extensive arm workout. And judging by his progress this season, Blessing is on track for success. He recently sent a warning shot to his competition showcasing arguably the best back he’s ever had.

While she no longer actively competes, influencer Nabieva held her own training with Awodibu. With big plans for 2022 Mr. Olympia, Blessing continues to push in contest prep to bring his best package to date.