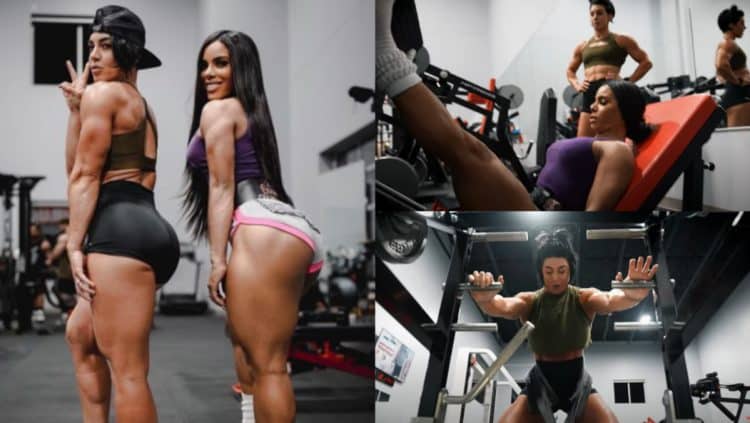 Female bodybuilder Dana Linn Bailey is known for maintaining a shredded physique even in retirement. In a video published on YouTube, Bailey is led through a taxing slow and controlled leg/glutes workout with Wellness standout Yarishna Ayala.

Throughout her bodybuilding career, Bailey proved she was able to compete against the best. She won the Women’s Physique title at the 2013 Olympia contest. Time and time again, Dana has demonstrated excellent conditioning and superb back development. While she intended to defend her title at 2014 Olympia, she was dethroned by first place winner Juliana Malacarne.

While she no longer competes professionally, Bailey is lauded for her dedication to fitness, which is always displayed on her growing YouTube channel of over 500,000 subscribers. In addition to YouTube, Dana’s Instagram following is over two million. Bailey has a wealth of experience training. She’s worked out alongside notable figures in the sport like four-time Mr. Olympia Jay Cutler and bodybuilding coach/guru Hany Rambod.

This time, Dana is joined by Wellness bodybuilder Yarishna Ayala. As one of the most popular competitors in her category, Ayala has earned the respect of her peers and fans alike with incredibly detailed hamstrings and glutes.

Last year, Ayala put forth an impressive season, which started with a runner-up finish at the 2021 Pittsburgh Pro. Unsatisfied, Yarishna took an improved package to the New York Pro and won handily. She finished the year off with a fourth place showing at the Olympia contest last December. With the prestigious event set to take place in less than 16 weeks, Ayala and Bailey joined forces for a brutal leg/glutes workout.

Leading the workout, Ayala guides Bailey through a warmup with abductors.

“The booty queen says we’re starting with abductors,” Dana Linn Bailey said. “If you notice — we’re actually slowing these down. You can do these; I’ve seen girls on these doing like hundreds and hundreds of pounds. So, we’re slowing it down, doing a four-second pause on each and every rep.”

For their second exercise, Dana and Yarishna practiced hip thrusts but slowed down at the top of each rep to maximize time under tension.

“We’re doing a four-second eccentric — so, you’re slowing the rep down and at the top, you’re definitely squeezing for a good few seconds. Just time under tension makes it so you don’t have to put on a thousand plates,” Bailey explained.

A common theme throughout their workout was slow and controlled reps. They practiced sumo pit sharks next. While Dana used her hands to help her balance, Yarishna opted to perform the exercise only using her lower body.

“Alright, next up: we are doing some sumo pit sharks. Again, slow eccentric down, and then we’re holding for a nice three-second count at the bottom,” says Dana. “Slow, controlled and up — 10 reps.”

Following another set, Bailey said she couldn’t believe that Yarishna had enough control and balance to not use her hands during this exercise.

“For years, I’d only train legs. When I could fit in Bikini five year [ago]. When I start[ed], that surprised me but then I train legs three days a week,” Yarishna told Dana.

Before starting on the RV hack sled, Yarishna told Dana that she is surprised male bodybuilders focus on their upper body and forget to train their legs. Afterward, Dana shared their targeted goal for this movement.

“Moving on to a more glute and hamstring-focused exercise. So, we’re on a hack sled, however, we’re reversing it and really pushing from our backside. So again, coming down nice and slow, focusing on the eccentric, we’re doing a three-second countdown, hold for three seconds and then up. Feet are generally a little bit wider than normal. Toes slightly pointed out to really get that side glute,” says Bailey.

Moving to pendulum squats, Dana Linn Bailey told Yarishna she was getting hungry after revealing that she trained legs 12 hours ago. She added that her and Yarishna are lifting a lot more weight this time around.

“So far, I haven’t let her down yet. Let’s go eat some pizza and wine because when you train… the pizza is supposed to directly to your butt, because that’s what we train, it’s science.”

“Three sets, 10-12 reps of everything, slow on the way down. Little two-second pause at the bottom. Just like we’ve been doing with every single thing — slow, controlled, pause, up,” says Dana.

Dana and Yarishna wrap up the workout with a series of walking lunges.

“Again, slowing them down, holding at the bottom… that’s the name of the game today. Slow it down. Slow it down, which sometimes you forget about that,” Bailey said.

While Bailey has long stepped away from the sport, her commitment to training hasn’t waned. One of her most recent workouts saw her joined by female bodybuilder Kristen Nun for a high-volume leg training session. Meanwhile, Ayala has kept her head down this year as she continues preparations for 2022 Olympia. Yarishna is qualified for the contest and plans to bring the best package of her career at the upcoming show.

Even though Dana trained her legs earlier in the day, she was able to keep up with Yarishna. Judging by Ayala’s work ethic and latest workout, she’s on track to turn in one of her best looks at Olympia later this year.