Dana White achieved an incredible body transformation where he lost over 30 pounds after receiving news that he might die in "10.4" years from a DNA expert. 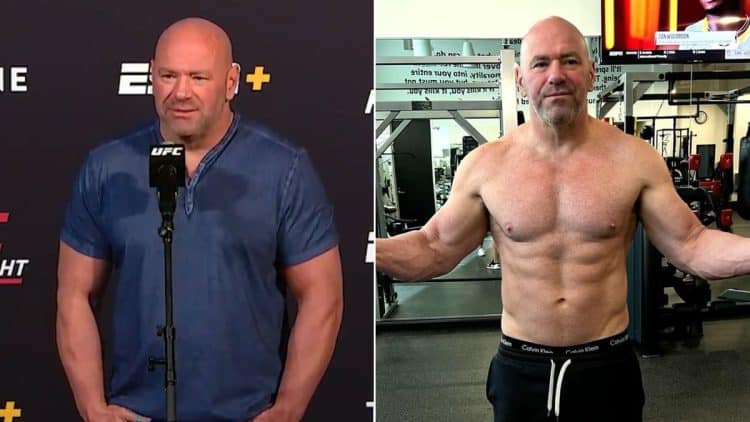 UFC president Dana White is one of the most popular figures in mixed martial arts and is largely credited for the mainstream success of the sport. In a recent post made on Instagram, White shared how he achieved the incredible body transformation and lost 30 pounds.

White grew up with a passion for boxing that led him to various renowned boxing gyms in Boston, Massachusetts. He began boxing at the age of 17 and decided to enter the fight business with his own gym. White claimed that he moved to Las Vegas after he received a threat from notorious organized crime boss Whitey Bulger after his gang demanded that he pay them money.

His move to Vegas would change the trajectory of his career as he reconnected with his close friends Lorenzo and Frank Fertitta, who all joined forces to become the top faces (at the time) of the UFC fighting promotion. While at first the UFC was tanking economically, White turned things around and produced the most popular and most recognized combat sports franchise the world has ever seen.

White is known to spend a lot of money given his success. He gave fans a look inside of his home gym, fridge, diet, and training program in June 2021, where he appeared arguably more jacked than he is now. Check out his latest physique transformation below.

In a recent post uploaded to Instagram, White shared how he pulled off the incredible body transformation at 53 years old. His workout regimen was fueled by the fact that a DNA expert told him he had only around “10.4” years left to live.

“This guy can take your blood and your DNA, and tell you when you are going to die, and he’s right within a month. How crazy is that? I connect with this guy. They come in and do my blood work, they scrape the insides of your cheeks to do your DNA. The following Wednesday is when my results are supposed to be back. So, he calls me.

All I’m talking about is finding out this date and he says, ‘I’m going to come out personally and walk you through your blood work. I’m like, ‘motherf**ker, (I don’t need a cliffhanger).’ He ends up coming out, sits down for three and a half hours and goes through my blood work. I’m all f**ked up, everything else that could possibly be bad is bad. He gave me 10.4 years to live.”

At first, Dana White shared that the doctors he was consulting weren’t able to help him improve his physique. Eventually, he lost 30 pounds and reported positive results after a DNA expert said he only had around 10 years left on earth.

“He says, ‘if you do what I tell you to do for the next ten weeks, I promise you I’ll change your whole life.’ I’m one of these people, when I set my mind to something I absolutely do it. I did everything he said to the letter. I lost 30 pounds. My legs were so f**ked up 13 weeks ago I couldn’t tie my shoes.

I couldn’t bend over to tie my shoes because my legs were f**ked, I could barely walk some days. Sleep apnea, snoring, I have these doctors that I went to for 10 years asking what’s wrong with my legs, they couldnt f**king tell me… no more sleep apnea, I don’t snore anymore, everything is gone in 10 f**king weeks. I’ve been working with doctors for 10 years that couldn’t do it.”

He revealed that he achieved his weight loss and ripped build by following a strict keto diet.

“I’m on the keto diet. Basically, people talk sh*t about the keto diet, like, ‘oh, you can’t do this, you can’t do that.’ There are essential fats that your body needs or you’ll die. There’s essential amino acids that your body needs or you will die. There’s no such thing as an essential carbohydrate, it’s not true it doesn’t exist. You don’t need f**king carbohydrates.”

If his recent update is any indication, Dana White is on an effective program by doctor Gary Brecka. Considering the transformation he pulled off in just 10 weeks, White is keen on keeping his health in check moving forward.

Obesity is one of the most widespread health issues in the modern age. What makes it so serious is that...