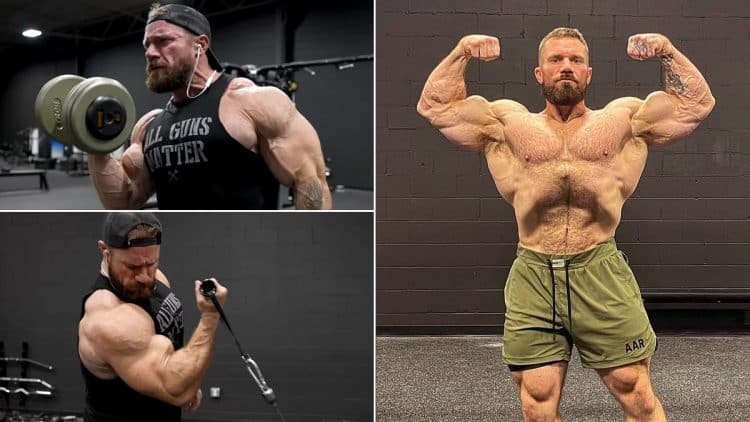 Seth Feroce is a prominent bodybuilder from the 2000s era. He has maintained an impeccable physique and has remained a popular figure in the fitness industry almost a decade after his retirement from competitive bodybuilding. The 39-year-old is a vocal critic of steroids use in bodybuilding and has warned the younger generation about their downsides on multiple occasions. Recently, Feroce opened up about a health scare and hinted at a potential return to competition. However, it is not confirmed if he will make that move anytime soon.

Although he competed as a bodybuilder himself, Feroce has criticized the bodybuilding lifestyle on multiple occasions. While he admits that his body was aesthetically a lot better during his bodybuilding career, Feroce turned towards high-intensity functional training with a goal to improve the ability to perform different physical activities that are otherwise difficult for bodybuilders. However, the retired bodybuilder felt the need to incorporate weight training into his routine. In a recent video, Seth Feroce performed an intense arm workout and gave some helpful tips on how to do it effectively.

In the beginning of the video, Seth Feroce stated that he has gained about 16lbs weight over the last six to seven weeks.

“I’ve decided to stop eating salads and being a little b****. I’m still functional, I’m still very f***able. But my functional workouts have gone from me doing bodyweight CrossFit stuff to like… 315lbs farmer carries.”

Feroce added that he was ‘tired’ of doing the bodyweight exercises and being a big guy, he prefers doing heavy lifting and putting a lot of food in his system. The retired bodybuilder clarified that he is not using steroids to get big.

“You’ll know if I get back on sauce which might not be off the table. We might do a show… I don’t know… It’s a joke!” Feroce added.

Feroce then headed to his private gym and jumped into the workout after taking his pre-workout shake. In this arms workout, Seth Feroce performed a number of antagonistic supersets, which means a superset with alternate exercises that target the opposite muscle groups like biceps and triceps, chest and back, quads and hamstrings etc. Seven-time Mr. Olympia Arnold Schwarzenegger is one of the earliest and biggest proponents of this training method. Biceps and triceps are one of muscle groups that respond the best to antagonistic supersets.

Before starting the main workout, the 39-year-old reiterated the importance of warming up the body before the workout and stated that it is the best thing irrespective of your age or target muscles for that particular session.

“Having a solid warm-up routine is a good idea… Every part of your body including your legs… Stretch them out even though you’re not training legs. I warm up and get all these juices flowing. So that way when I go into hammer curls, I can just f***ing dive right in. No need to f*** around and just do a warm-up set. Nope. I’m already warm…”

Seth Feroce warmed up his body with multiple workouts like seated cable curls, dumbbell curls, bent-over rope pushdowns, V-bar triceps pushdowns, and hammer curls in the first phase of his workout. Once the warm-up exercises were under the belt, Feroce stated that this is usually the ‘first climactic point’ of his workout.

“I can feel f***ing everything moving, I’m strong, I can feel it and I’m excited. It’s like I got all the juices flowing for the workout,” Feroce added.

Related: How to Warm Up for Strength Training

Feroce started the arms workout with this superset to work the biceps and the triceps. Hammer curls are an isolation movement that works the biceps brachii, brachialis, and brachioradialis muscles while the V-bar pushdowns work the triceps muscles.

After performing all the sets in this superset, Feroce took to the next exercise.

Feroce jumped into another superset to work the arms further. While he trains in his private gym and has the liberty to use the equipment or machines without interruption, he noted that might not be the case for those training in crowded gyms. For those people willing to incorporate supersets in their workouts, Feroce advised:

“If you’re training at a big gym that’s not private or there’s a lot of people there and you’re trying to do the arms like me… Go to the gym with a plan but understand you might have to manipulate it a little bit mid-workout if you’re trying to do a superset like I’m doing… So I will pair exercises that are close to each other, in proximity…”

In this next superset, Feroce took to the seated cable curls to target the biceps. The 39-year-old stated that he appreciates the constant tension that the cable machines provide as the reason for incorporating cable curls in his arms routine. He added that he prefers to switch between a straight bar and camber bar attachment. Feroce superset this exercise with overhead dumbbell triceps extensions which is his all-time favorite exercise for triceps. Before starting the exercise, Feroce shared three best triceps exercises according to him and said:

“If you have weak triceps, close-grip bench, overhead dumbbell extensions and dips are three staple exercises for building thick triceps. Overall triceps development, I think those are the top three in my opinion. Putting them all in your workout might be a lot on your joints. So again, train intensely and train hard but also train smart.”

After performing heavy sets of these exercises in rapid succession, Feroce took to the next superset.

This superset was next in line in Feroce’s arms workout. Feroce performed a single arm dip press to work the triceps while the dumbbell curls focused on the biceps. Generally, the dip press is performed with both hands. However, Feroce explained that he likes to do this exercise unilaterally and lean onto the machine with the free arm. While explaining the benefits of this variation of dip press, Feroce said:

“Traps, shoulders and triceps… This exercise is all of that,” Feroce added.

The 39-year-old then demonstrated how the exercise can be performed on an assisted dip/pull-up machine. Feroce advised using the knee pads/footrest of the machine to push down while the free arm can be used to lean into the machine.

He performed the sets of all the exercises with minimal rest periods and went on to perform the last superset of the day.

This was the final superset to work the biceps and triceps in Seth Feroce’s arms workout. He superset unilateral cable curls (biceps) with unilateral cable triceps extensions (triceps). Both were cable exercises that keep the muscles under tension throughout the range of motion. Additionally, the weights in cable machines move along a fixed trajectory, eliminating the need to control them. This helps reduce the chances of injuries. Especially in Feroce’s case as this superset was performed towards the end of the workout when the muscles were significantly fatigued to control the free weights.

Seth Feroce performed both exercises in a slow and controlled motion and moved on to the finisher of the day.

Feroce next took to this exercise to isolate the triceps. Cross-body cable triceps extensions are one of the best exercises to isolate this muscle as the shoulders are locked in position and the movement enables full elbow flexion to work the triceps. Feroce performed a few sets of this movement and wrapped up the arms training session.

Note: The term ‘superset’ in this article means ‘antagonistic superset’ as Seth Feroce worked the opposite muscles – biceps and triceps in each superset

Even in retirement, Seth Feroce continues to train with a furious intensity and gives motivation to millions through his workout videos. While it is not certain whether he will ever grace the competitive stage with his presence, it is certain that his love for bodybuilding is intact and he will continue to get better.