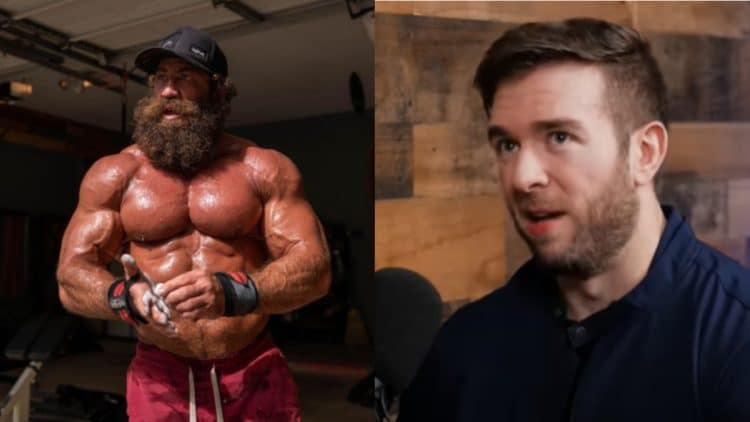 It’s been an eventful few weeks for Brian Johnson, well known as Liver King, who was ousted for using performance-enhancing drugs after a leaked email went viral, courtesy of Derek, from the More Plates, More Dates YouTube channel. Speaking on the Modern Wisdom Podcast, Derek reflected on Liver King’s PED confession and discussed his future in the fitness industry.

Liver King is a 45-year-old man who lives an ancestral way of life, which centers around community, family, and health. He refers to these practices as the nine ancestral tenets. In addition to these principles, Johnson regularly eats raw organ meats like liver, which he credits for his stacked physique and health.

Over the last year, his popularity exploded on social media. And all the while, he maintained that he’s never used PEDs or steroids. His natural claim was questioned by many, including podcast host Joe Rogan. According to Rogan, Liver King was filled with steroids. In spite of Rogan’s accusation, Johnson continued to claim he was natural and attended various podcasts to prove his point.

As a result of being caught seemingly red-handed, Liver King issued an apology video and confessed to using steroids. Derek has already tackled the issue at length with Joe Rogan but provided even more details in one of his latest interviews.

Derek from MPMD on Liver King Steroid Scandal: ‘There’s No Way I’m The Only One He Reached Out To’

Speaking with Chris Williamson, Derek reflected on the controversy and specified why he chose not to add a follow-up video to further support his findings.

“Blood work — I felt like it was a very long and elaborate dissection and I felt like it kind of just like was a little bit, it wasn’t redundant because I had new information, but it was more for the nerds and the guys who are highly interested in that stuff. I just didn’t feel like it added more after the first video to put it out when I feel like the communicated message was already efficient to show what happened from inception until now.

I don’t necessarily think that going down the complete scientific dismantlement of a blood test panel was going to be something that added more to the conversation other than being highly confusing or otherwise maybe even boring or I don’t know. It just didn’t seem like it was going to add more that was worthwhile to pile on at that point,” Derek MPMD said.

Even though Liver King confessed to using steroids, Derek believes there’s ‘more stuff out there.’

“There’s zero chance that there’s not more stuff out there. Like, there’s no way I was the only person he tried to reach out to, or this other coach… there’s definitely more out there for sure.” “I thought it [the apology video] was very well crafted. And I think his followers very much appreciated and a lot of others were like, ‘whatever, fu** it, it doesn’t matter.’

I thought it was a little bit of a hedge to justify, ‘oh people have mental health issues and are killing themselves, so I took PEDs to build this more viral brand to then get this message out to the masses further to help the people that are suicidal, and because I also have mental issues,’ he mentions his insecurities or whatnot,” Derek said.

Derek criticized Liver King for claiming that his lie about being natural didn’t affect the success of his supplement brand Ancestral Supplements.

“Is you building this character that is unachievable naturally helping body issues for men? Infinitely worse potentially,” said Derek. “Then, it’s also, it would be one thing if there was no monetary upside to it, but for him to continue to hammer that, ‘my businesses grow 50 percent a year without my push,’ it’s like fu** off. There’s no chance.”

Derek Reacts to Liver King’s Apology Video: ‘It Was Calculated Out Meticulously’

While there were some positives he took away from Liver King’s apology, Derek took issue with Johnson knowingly deceiving people about his steroid use.

“He didn’t want people to think that his therapeutic replacement was something that everyone needed if they were following a good lifestyle diet etc., and there wasn’t a monetary upside to what he was doing and there wasn’t this lying to their faces and all this stuff, but it was just… the apology was not — some of the stuff he said was good. He said he fu**ed up very clearly and he acknowledged what he did. Some of it was great for sure.”

“I definitely think his brands will survive and I think he will continue to have his followers. Ultimately, a lot of the stuff he does talk about is positive. And I do think people would benefit from some of the things he preaches but the way he calculated this out meticulously and went about deceiving people is just hard to wrap your head around as a justified move at the end of the day.”

Liver King’s Cycle and His Future

Derek briefly mentioned the drugs Liver King was using to maintain his build back in June 2021.

“Off the top of my head: there was IGF-1, CJC, Ipamorelin, mk677, GH, Winstrol, Deca, Test. So, eight — and that’s just going into the… you know, the questionnaire of trying to say, ‘this is what I’m doing right now, but I need next level and I need to figure this stuff out.'”

Derek of MPMD doesn’t believe the recent series of events will stop Liver King’s growth on social media. He hopes the leaked email and steroid cycle controversy will assist Liver King in being more transparent in the years to come.

“I do think he continues to grow on social media and make wild ancestrally consistent videos and shit. I don’t think it changes that much. He definitely is going to carry this with him, and people generally, at least know the truth behind the inception of the brand now and what the plan was from day one and etcetera. But, I very much think it continues a little bit on the same track, all but with more transparency to some extent.”

“I don’t necessarily think [all this] comes from a totally honest place necessarily but I understand why he would be doing it. If he aligns with the video and makes it seem like he has gratitude for it coming out and it helps him be a more transparent and better man in the future, then what else — I don’t know what else he could position it as or just not talk about it at all,” Derek said.

Since the viral exposé, the coach who communicated with Liver King via email has shared his side of the story. ‘Vigorous Steve,’ a bodybuilding trainer, discussed his interactions with the fitness star last year. He mentioned that Liver King has been patching one lie with another. Moreover, Steve added that Liver King (at the time), wanted to make him his secret drug dealer.

While there might have been damage to Liver King’s reputation, Derek doesn’t think it will stop him from spreading the ancestral message. Regardless, Derek believes that Johnson will carry this with him for the rest of his life.