The coach who leaked Liver King's steroid cycle, 'Vigorous Steve,' opened up on helping Johnson: 'he wanted me to be his secret drug guy' 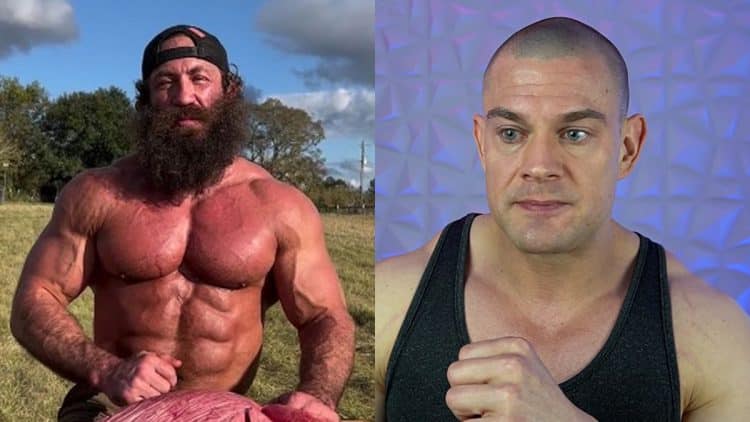 Liver King (real name Brian Johnson) has come under fire from the coach who leaked emails describing his steroid cycle to Derek from the More Plates, More Dates YouTube channel. In a recent video, ‘Vigorous Steve’ shared why he leaked the email and discussed the events leading up to Liver King’s confession.

Over the past several months, Liver King took the world by storm with his larger-than-life personality and ripped physique. He lives by the nine ancestral tenets that center around family, community, and health. In addition to an intense workout regimen, the 45-year-old has received notoriety for his obscure raw organ meat diet. Johnson has appeared on a number of influential podcasts as well, where he’s consistently dismissed the use of steroids and/or performance-enhancing drugs.

One powerful voice who took issue with Johnson’s claim was Joe Rogan. The podcasting juggernaut wasn’t buying Liver King’s schtick or his claim of being a lifetime ‘natty.’ In fact, Rogan previously stated that Johnson had an ass filled with steroids. And while there was no concrete evidence to support Rogan’s assessment, that all changed this week.

In a one-hour exposé, Derek, from the More Plates, More Dates YouTube channel shared confidential emails from Vigorous Steve and Liver King. In the emails, Johnson’s cycle was revealed. Many were surprised at the amount of growth hormone he was using. Days after his alleged cycle leaked to the public, Liver King issued a brief statement to the Rolling Stone publication, where he said he was ‘in a weird way grateful’ for the recent events.

Taking matters into his own hands, Liver King issued a formal statement regarding his use of PEDs earlier this week. He confessed to using steroids and said he ‘lied, fu**ed up, and misled a lot of people.’ And his ex-coach — who has remained quiet until now, is addressing the ‘Liver King Lie’ in his latest video.

Liver King’s Former Coach ‘Vigorous Steve’ Opens Up on ‘Red Flags’: ‘I Should Have Released This Info Months Ago’

Vigorous Steve admitted he was the coach who communicated with Johnson via email back in June 2021.

“Yes, that was indeed my old questionnaire and yes, I’m the guy that shared the private emails with Derek from More Plates, More Dates after more compelling evidence started to surface that Liver King was indeed using performance-enhancing drugs. I don’t think it comes as a surprise to anybody in the fitness community but there were plenty of people out there that believed the lie until the documentary was released.”

Steve quickly realized working with Liver King came with a ton of red flags. He said he felt conflicted about the situation for the last year and a half.

“Hypothetical question for you: if somebody signs up for coaching, [and] you have to refund them after two or three weeks of miscommunication and a ton of red flags… does it really count as coaching? I felt really conflicted about this entire situation for the last one and a half years, says Vigorous Steve.”

Reflecting on the controversial matter, Steve believes he should have come clean with the information the moment Johnson started claiming to be 100 percent natural.

“After I saw the apology video and the statement from Paul Saladino — I felt horrible. I should have released this information months ago the first time this guy started to claim natural publicly.”

“I gave Derek permission to use these emails in a redacted form to help Brian AKA the Liver King to finally come clean and to end the lies dead in their tracks, which to a certain extent he did. He admitted to taking and experimenting with performance-enhancing drugs. At the time, he filled out the questionnaire, and then he patched one lie with another lie, saying that he’s currently under doctor-supervised testosterone replacement therapy.”

After working with Liver King, Steve admitted there were a lot of miscommunications. He asked Johnson for additional blood work, but the fitness star refused to comply. This was a huge red flag for Steve given his experience working with other bodybuilders.

“I guess he was very busy as well because we had a lot of miscommunications and the coach-client relationship only ended up lasting two or three weeks. I asked him to do additional health screening going forward. He told me he felt fine. That’s a huge red flag for me. I’ve heard this a hundred times before from competitive bodybuilders who are very reluctant to get their health in order.

Knowing that this was going to turn into a headache and wanting to phase out the coaching services anyway, I decided to refund his money. I told him we were not going to be a good match and I never heard from him again,” Steve said.

In the end, Steve realized that Liver King wanted him to be his ‘secret drug guy.’

“Now, looking back on it, what he wanted me to do is be his drug guy secretly. Thus, I would have been complicit in this lie all along. If I knew what was going to happen, what the Liver King was going to turn into…man I wouldn’t be able to live with myself.”

In light of the recent events involving Liver King, podcast host Joe Rogan is now calling on other stars in the fitness community to come clean about using steroids. He recently spoke with Derek from YouTube’s More Plates, More Dates. They both agreed that Dwayne ‘The Rock’ Johnson should admit ‘right now’ to using steroids. Moreover, Rogan said there’s not a ‘chance in hell’ that The Rock is natural given his size and muscularity at 50.

Additionally, Rogan and Derek addressed Mike O’Hearn’s lifelong claim of being natural. Rogan was far more skeptical about O’Hearn’s natural status compared to The Rock’s. He credited O’Hearn for being a genetic freak but doesn’t believe he’s been natural for a lifetime.

Having cut ties with Johnson early on, Steve is happy to no longer be a part of Liver King’s lie. Given the sensitive nature of the subject, at least Vigorous Steve was able to shed some light on one of the most publicized natty or not discussions fitness has seen in years.