Discover the training and diet Dylan McDermott follows to build muscle, get stronger, and stay lean. 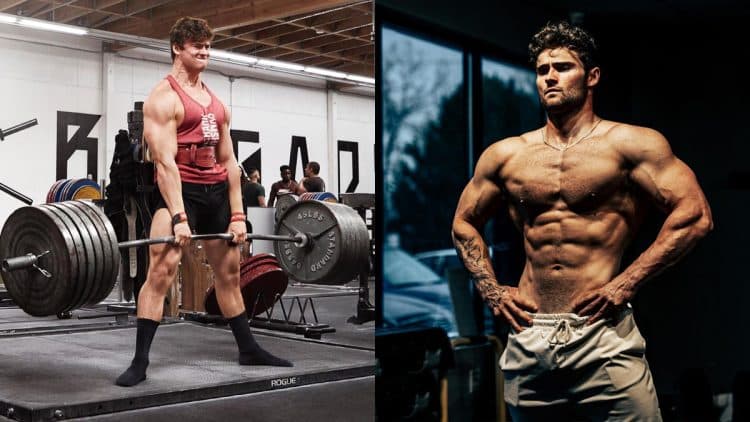 Dylan McKenna is a rising fitness star, model, and social media personality. On the strength of his muscular, ripped physique and personality, he has built an impressive social media following, with in excess of 170,000 YouTube subscribers and more than 420,000 Instagram followers.

In this article, we’ll go in-depth into Dylan’s training, supplements, and diet routine.

Dylan McKenna was born on Mar. 15, 1998, in New Jersey and currently lives there with his family. He began working out at the age of 14 for sports but soon discovered that he has the genetics to build a phenomenal physique. He caught the weight training bug and never looked back.

“As soon as I started lifting, I stopped doing all of my other sports to devote myself entirely to training, helping others better themselves, and pushing myself in the gym.”

Dylan began posting clips on YouTube in 2016. He has since built a sizable subscriber base. His most popular video, ‘Getting Kicked Out of Planet Fitness’ has over 1.4 million views.

Dylan describes himself as a fitness freak. He does some sort of exercise every day and carefully monitors everything he puts in his body. He loves to share his training and diet knowledge with others. In addition to his social media career, he is also an online coach. Dylan also publishes online training programs.

Dylan follows a modified push, pull, and legs (PPL) routine. He trains five days per week, doing his push and pull workouts twice, and his legs workout once every week. Here is what his weekly schedule looks like:

Dylan’s lower body workouts are so intense that his wheels require up to a week to recover. His PPL routine runs in 5-week phases. Over the first four weeks, he works to increase the poundages on every set of each exercise.

The fifth week is a de-loading week during which he trains for just four days and only does the bench press, squat, and deadlift. He does three sets of three reps on each exercise with 60 percent of his one-rep max (1RM).

Given below is McKenna’s training regimen:

Dylan consumes about 3,500 calories per day. He eats the traditional three meals per day, with a protein shake thrown in after his morning workout. He carefully monitors his food intake with the aid of a food scale.

Dylan follows the if it fits your macros (IIFYM) dietary philosophy. IIFYM or flexible dieting tracks macronutrients — protein, fat, and carbohydrates — instead of calories. On an IIFYM diet, all foods can be enjoyed as long as they fit your macro goal for the day.

Here is an example of what a typical day’s eating looks like for Dylan:

Dylan advocates relying on whole foods than supplements to provide your body with the fuel it needs to perform in the gym. There are, however, a couple of supps that he will not go without:

Dylan uses a protein shake as his post-workout nutrition. It provides all of the amino acids that his body needs to promote protein synthesis and switch to an anabolic state. He uses a protein powder that includes 20-30 grams of carbohydrates in the form of maltose or dextrose, providing the glycogen needed to replace the depleted levels in his muscle cells.

To improve his focus and intensity, Dylan takes a pre-workout supplement with water about half an hour before his workout. He doesn’t have a favorite brand but ensures his supp has ingredients like caffeine, citrulline, beta-alanine, BCAAs, and creatine.

Dylan McKenna works hard to maintain the physique that has helped him build a successful social media career. His push, pull, and legs routine is a good model for intermediate and advanced level trainers to follow. If that’s you, give it a try for three months and let us know how it goes.

How To Do Low Jacks – Muscles Worked, Benefits, and Alternatives