Hall teams up with 'The Giant' for a back workout, having set his eyes on the bodybuilding debut 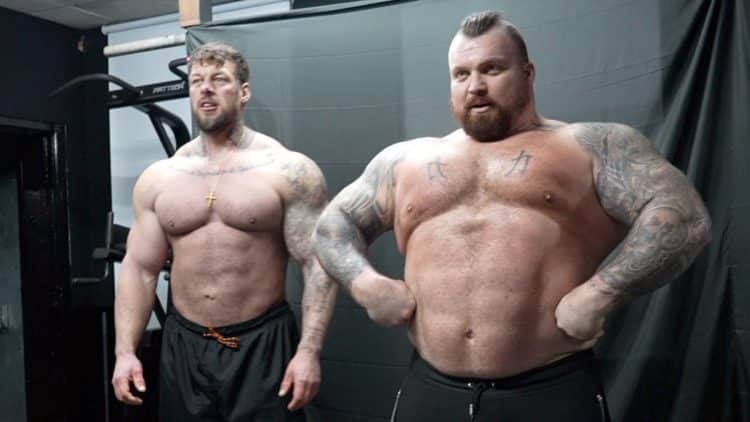 Following his retirement from the Strongman, Eddie Hall transitioned to boxing to battle against Bjornsson. The much anticipated boxing match was labelled as the heaviest match in the history of boxing. So, after months of dramatic build-up, the duo met on March 19, 2022 at the O2 arena in London, UK. Bjronsson won the contest via unanimous decision. However, it was a hard earned victory as Hall put up a tough fight and had his big moments as well.

It seems that boxing is off the cards for Hall currently, as he has announced that he will try his hand at bodybuilding. He is expected to compete towards the end of 2024. The Beast has already started the work to get the necessary body composition for bodybuilding and shared a bodybuilding chest workout a few days back.

Most recently, Eddie Hall partnered with Jamie Christian-Johal ,AKA The Giant, for a hellacious bodybuilding back workout at the Giant’s Lair gym. At 6ft-5-in, he is one of the tallest IFBB Pro bodybuilders ever. In spite of the unusually tall stature for a bodybuilder, Christian possesses quite an aesthetic physique.

Being the more experienced of the two in bodybuilding training, Christian guided Eddie Hall and his son ,Maximus, through the workout. So without further delay, let’s take a closer look at the detailed account of this training session.

Eddie Hall and The Giant go through the bodybuilding back workout

The duo started the workout with one of the most standard back exercises. However, the lat pulldowns are a very effective compound movement that work the latissimus dorsi and other upper back muscles. Jamie Christian-Johal guided Hall through the correct range motion during the warm-up sets. They performed three warm-up sets of lat pulldowns followed by two working sets. The last set was a drop set. Christian explained Hall:

The Giant explained that rowing movements give thickness to the back. Therefore rows constitute a large part of his back workouts. So after wrapping up the lat pulldowns, the duo moved on to a horizontal pulling movement next.

Hall and Christian took to the seated rows next. To build the mind-muscle connection and remove momentum out of action, The Giant advised Hall to take a pause at the end of the concentric and eccentric phase of the rep.

After a few warm-up sets of seated rows, the duo performed the working sets with the rest-pause method and jumped into the next exercise.

Hall and Christian took to an old school exercise to continue their training session. They performed this exercise on the chest supported T-bar rows machine. Since the chest is firmly pressed against the pad of the machine, it eliminates the jerking actions and momentum pulling. As a result, the back muscles are activated to a far greater extent.

“The seated rows probably would have (worked) the lats and mid-back because we’re pulling low. So this one you’ll feel more of (the upper back),” Jamie Christian stated.

The Halls and Christian performed a couple of warm-up sets first and moved on to the working sets next. After pushing through a double drop set, they took to the next exercise.

Jamie Christian guided Eddie Hall through another variation of horizontal pulling movement, as they did low rows on an iso-lateral machine next. Christian also taught Eddie the cluster set training method for this exercise. As explained by him:

“A cluster set… So basically it’s another way to extend the set. I’m gonna choose a weight. We’ll do it five times in the reps of four or five. So basically you finish off by doing 20 reps or 25 reps. The aim is it’s easy to do the first one, two, three but it should get progressively harder by the fifth set.”

The training partners added the last bit of stimulus to the back muscles with this superset. Hall performed the lat pulldowns and seated rows in rapid succession. Each set consisted of ten reps.

After finishing all the sets within this superset, Jamie Christian taught Eddie Hall some intricacies of posing and that marked the end of the training session.

Eddie Hall seems to be gathering extensive bodybuilding knowledge by collaborating with the likes of Jamie Christian and Jesse James West. Although his bodybuilding debut is still almost two years away, looking at the amount of work he is putting in, it is certain that his stage presence will be a memorable one.