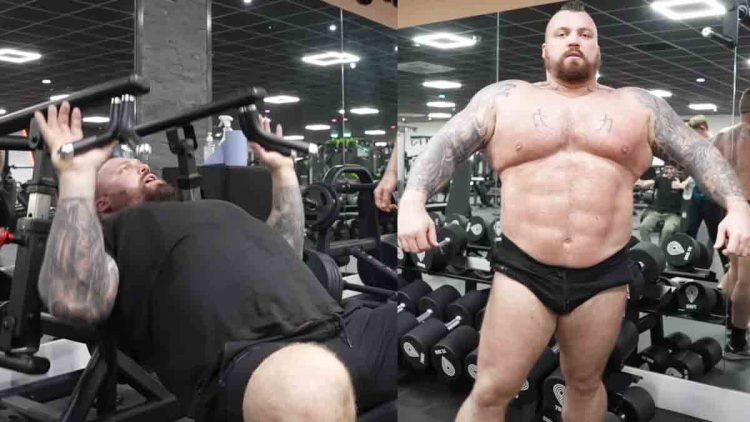 Strongman-turned-professional boxer Eddie Hall is gearing up to make a splash in bodybuilding. Hall made an illustrious career in the sport of Strongman and became the 2017 World’s Strongest Man. Claiming the most prestigious title in the sport only added to his popularity from when the Brit became the first person to deadlift 500 kg (1102.3 lbs) in 2016. However, Hall’s bitter rival from strongman days Hafthor Julius Bjornsson ,AKA The Mountain from HBO series Game of Thrones, deadlifted 501 kg (1104.5 lbs) in 2020 to beat the record.

The duo transitioned over to boxing to settle their feud, making for one of the most epic fights in existence. Marketed as ‘The heaviest boxing match in history’, the fight took place on March 19, 2022. Unfortunately for Hall, Bjornsson walked away with a unanimous decision win. After Eddie Hall fulfilled the requirements for a rematch, it seemed likely that the duo would meet again in the ring. However, there has been no further development regarding the same.

Recently, Eddie Hall announced that he will try his hand at bodybuilding and “see where he can get to” in the sport. He will most likely step on the stage in late 2024, following a very long process of bulking and shredding. Recently, Hall went through a bodybuilding chest workout with his son Maximus and YouTuber Jesse James West. So without further delay, let’s take a closer look at the detailing account of this training session.

During his appearance on fellow Strongman Brian Shaw’s podcast, Eddie Hall revealed that his son Maximus has ADHD (Attention Deficit Hyperactivity Disorder). The Beast himself suffered with the condition too and exercise helped him get over it during his own childhood. He has been training Max in the gym for a while and taught the 10-year-old to perform his first deadlift a few months back. Ever since then, Maximus has become the greatest training partner Hall could have. The duo went through a chest workout together as usual, but Jesse James West joined them along the way. Focused on muscle building, the training session aimed at helping Hall in his bodybuilding journey.

Eddie Hall started the chest workout with arguably the most effective exercise for chest muscle activation. He first did the warm up set of bench press using a 20-kilogram bar without weight plates. He did partial reps of this exercise at a very fast pace without raising the bar all the way up and did not pause at the top or at the bottom.

“It’s a really efficient way that bodybuilders train because it’s keeping the tension on the muscle all the time. It’s not resting at the top. So it’s actually a really good way to build muscle… For strength, terrible!” Eddie Hall stated.

The next set included one 20-kilogram plate on each side. Hall held his legs mid-air while doing the exercise to work the abs and pushed through all the reps at a quick pace. He took a huge jump in weight for the next set and cranked out a few solid sets with 110 kilograms of weight. Hall’s son Maximus followed his father’s footsteps and lifted 30 kilograms and 35 kilograms for two sets.

The Brit next took to the incline bench press and once again, he started with lighter weights to get used to the movement. After doing the first set with 60-kilogram weights, he did the next set with 100 kilograms.

“Another thing we’re trying to do is minimize the time between the sets. So by the time Max has done his set, I’m getting the weights on and I’m going again. So that’s also a part of bodybuilding – getting that lactic build-up in the muscle and before that pump goes, you’re going back into another set,” Hall explained after a couple of sets.

Eddie and Maximus got a few solid sets of incline bench press under their belts and took to the next exercise.

Fitness YouTuber Jesse James West joined Hall in his workout by this time. He took a break from his own shoulder workout to pump the chest with Eddie and Maximus. West advised Hall to perform the first couple of sets close to failure and go all in for the third and final set.

Instead of doing partial reps, West suggested Hall go “5 percent to 95 percent” – slightly short of completing the full range of motion at the top and at the bottom. The trio pushed through three solid sets of incline chest press and moved on to the next exercise.

The trio did all the sets with incrementally heavier weights. Jesse James West superset this movement with the standing lateral raises while the Halls only did the incline chest press.

Eddie Hall switched to working the shoulders for this next exercise and did machine bent over lateral raises. The training partners pushed through a few solid sets of this exercise, getting a massive pump along the way.

Eddie Hall suggested Jesse James West try one of the old-school exercises which he did as a teenager. Hall stated that doing this exercise at a really slow speed has its own advantages. In Eddie Hall’s own words:

“So the idea being this is really good for creating that body-mind connection while as well as concentrate just on your chest muscles and triceps as well.”

Hall and company did a few sets of incline press-ups for ten reps and wrapped up the training session.

Eddie Hall is a naturally gifted athlete. Combined with his unparalleled work ethic, the Brit has created a lasting legacy in strongman sports and also made a short but intriguing foray into boxing. If Hall makes the transition to the bodybuilding lifestyle in the correct way, no one can deny that he can make a respectable competitive appearance on the bodybuilding stage, to say the least.