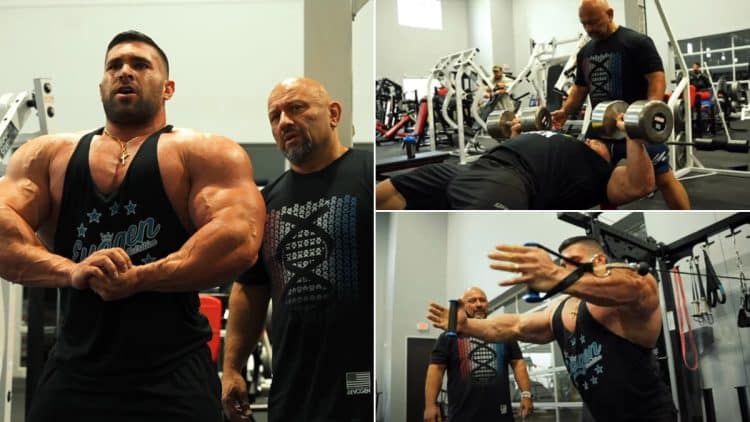 Bodybuilding coach Hany Rambod is responsible for coaching some of the greatest athletes to emerge in the sport. In a recent video, Hany guided Lunsford through a brutal FST-7 chest workout at Labrada Nutrition in Texas as they continue preparations for 2022 Mr. Olympia.

Rambod’s meticulous nature shines through his training sessions. He has helped many legendary bodybuilders reach their full potential in the IFBB Pro League, like seven-time Mr. Olympia Phil Heath, as well as four-time winner Jay Cutler. In addition to a slew of other athletes, he coaches Hadi Choopan, who has placed fourth or better at every Mr. Olympia contest he’s participated in.

The reigning 212 Olympia champion Derek Lunsford is also under the watchful eye of Hany Rambod. Despite earning the 212 crown last year, speculation about Lunsford switching to the Open class is growing. He guest posed at the 2022 Pittsburgh Pro, which left many in the community shocked by his size. Derek was able to stand next to Men’s Open bodybuilders like Hunter Labrada, Nick Walker, and Brandon Curry without appearing undersized.

While Lunsford is qualified to compete at Olympia in the 212 division, his coach is worried about Derek’s ability to make the weight. Recently, Rambod said they are having to seriously consider their options. Olympia President Dan Solomon vocalized a similar tune, suggesting that the 27-year-old is nowhere near 212 at this point. Despite the uncertainty, Rambod and Lunsford are attacking prep with a demanding FST-7 (Fascia Stretch Training) chest workout.

In a recent YouTube video, Rambod guided Derek Lunsford through a series of exercises designed to build a fuller chest.

Note: Sets and reps were unclear based on the footage provided in the video

Rambod started Lunsford on the chest press machine. During this compound movement, Rambod placed his hand on Lunsford’s chest to help maximize the mind-muscle connection. In between sets, Rambod helped Derek stretch his forearms after a static hold.

“Watch your back [during this exercise],” says Hany Rambod.

After smashing a set of dumbbell bench presses, Rambod takes a moment to explain some of the finer details involved in Lunsford’s supplementation.

“We got to work on control. So, we’re trying to hyper hydrate so we’re using the coconut powder from the [Evogen’s] Amino Kem but it’s also going to be a great recovery agent. So, I’m using the essential amino acids for that because that’s also in the Amino Kem,” Rambod said, while explaining the importance of pumping nitric oxide during workouts.

“The third ingredient that really helps out is the S7 (Evogen EVP AQ | Premium Liquid Glycerol, Betaine anhydrous, S7, Sodium Nitric) is going to help pump that nitric oxide to make sure its pumping and flowing through your system. Not only are you getting the pre workout nitric oxide but you’re continuously using nitric oxide in your body to be able to keep up with the vasodilation, even with the S7 during the workout.”

In between sets, Hany implored the reigning 212 Olympia champion to practice some posing. Lunsford briefly hit a most muscular pose.

“We’re going right into a power press. Again, these are all different ranges of motion that he’s definitely not used to. This is the very first time he’s ever done these. Again, what we’re trying to do is keep his shoulders back, drive with the pec, and have the muscle go as far up without blocking as possible and then going into those partials at the very end.”

For the only bodyweight exercise of the session, Rambod told Derek to arch his back while performing push ups.

Lunsford reflected on the chest workout with his coach following the second cable exercise.

“It feels good, but I can’t go that heavy. I’m not used to activating this [lower pec] so I feel like after today, everything we did — it was humbling. But I can feel it really… it’s filling out and I can feel it firing way better.” Lunsford told Hany.

“I feel pumped and full. It’s been a good three days. Lunsford said. “Today was a great chest day.”

Derek’s preparations are ramping up judging by his efforts in the gym lately. With his eyes on another Sandow trophy, Lunsford annihilated his legs with a heavy quad, glutes, and hamstrings workout. In addition to his training and supplementation, Derek shared his bulking diet for this year’s season recently. The bodybuilder consumes six meals daily and said his focus in on feeling healthy and making improvements to his physique.

Working in tandem with Hany Rambod, Lunsford is adding muscle mass and continuing to make improvements. With 2022 Mr. Olympia in less than 17 weeks, Lunsford’s preparations for this season are ramping up as he aims to capture another Sandow this winter.