Martyn Ford tackles the sensitive subject in a recent interview and added that there is a 'huge problem with steroids in the fitness industry.' 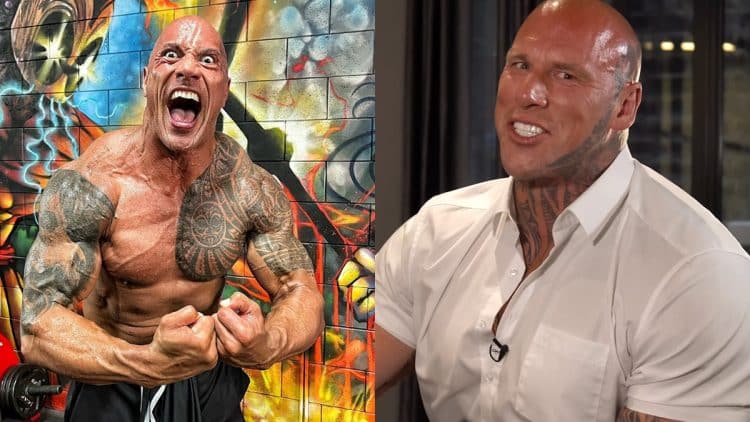 Fitness influencer Martyn Ford sat down to give his thoughts on steroids in the fitness industry. In a recent video, Ford discussed the need for steroid education and whether Dwayne “The Rock” Johnson uses steroids to maintain his physique.

Martyn Ford is a 6’8″ titan, known in the fitness industry for his shredded build and shocking muscularity. He was expected to face Sajad Gharibi (The Iranian Hulk) in a widely publicized boxing match a few months ago.

The anticipated showdown was scheduled for the famous O2 Arena, but a number of issues got in the way. Following a face-off for the fight, Ford pushed The Iranian Hulk to the ground. After the scuffle, Gharibi cried in an interview explaining that his family disowned him as a result of the embarrassing encounter.

Ultimately, Ford was the first to announce the fight was off. He cited health and safety concerns as the main reason but also voiced his worries about Gharibi killing himself should he lose the boxing match. Ford has been on the lookout for a new opponent ever since.

All signs pointed to Hafthor Björnsson as Ford’s next opponent. Ford revealed that an offer was made to fight the 2018 World’s Strongest Man. However, plans for the bout never moved forward because Ford said Björnsson is having issues with Eddie Hall following their boxing affair, which Björnsson won via unanimous decision back in March.

While waiting on his next opponent, Ford has been training non-stop while setting time aside for interviews. His recent video with Rob Moore sparked a lot of intrigue after the massive fitness influencer gave his opinion on steroids, and if Dwayne “The Rock” Johnson uses them.

In a recent interview, Ford gave his two cents on the sensitive subject of steroids in the fitness industry.

“For me, the steroids situation is a very difficult one to go into because it’s like me asking you if you’ve ever done cocaine, have you ever smoked marijuana, or have you drank excessively.” Ford explained.

Ford says steroids can be used for good or can be quite dangerous in the wrong hands.

“I don’t necessarily believe it’s a bad thing. For me, my problem with questions around performance-enhancing drugs… it’s a very awkward subject because, do I believe they can be used for good? Yes. 100%. Science proves that. Do I believe in the wrong hands they are dangerous, yes — 100%.”

Given the prevalence of social media, children and people of younger ages are impressionable, according to Ford. He argues that they selectively listen to what they want versus understanding the research necessary for taking anabolic compounds.

“The issue with people openly talking about drugs, especially steroids, from someone who’s a fitness person on social media, is that young impressionable kids will listen to an answer and take from it what they want. They won’t do the research, they won’t do the blood test, they won’t do the training first for five years by eating healthy and hitting your genetic potential.”

Before giving his thoughts on The Rock’s alleged use of steroids, Ford stressed that steroids make up a part of the black market, where these compounds are often made in home labs or at people’s houses instead of a controlled scientific laboratory.

Ford added that only two or three percent of the human population are genetically gifted and everyone else just ‘chases that look.’

“I don’t care what people say. There’s two to three percent of genetically gifted people and then the rest will always be chasing that look. There’s no way you can look like a fitness influencer without drugs. I can look at 100 athletes and 99% I can tell you how many are and how many aren’t on drugs.”

“I don’t know. You don’t need to answer the question. He’s one of the most famous actors in Hollywood. I love him to pieces. I think he’s a great guy. I think he’s a brilliant guy and he trains ridiculously hard and he’s worked every second for his physique. I mean, if he’s natural, he’s fuc**ng gifted. But I wouldn’t say anything about him by doing it or not doing it.”

Even in sports like bodybuilding where steroid use is rampant, Ford said talking about the matter is difficult, especially for anyone in the fitness industry with a following.

“When you’re in a bodybuilding environment and so on, it’s a question that’s double loaded and it’s a very awkward subject to talk about. I come from the standpoint that I would rather a professional talk about it, a doctor who can give good advice to kids who are very impressionable at a stage where I think us as adults have created it for them to be honest through social media. We’ve made them feel not good enough by looking normal that they feel the need to have to look at certain way.

The Rock and his alleged use of steroids reared its head in the news before. Four-time Mr. Olympia Jay Cutler spoke about Johnson and bodybuilder Mike O’Hearn’s natural status. Cutler says he understands the position they are in and respected the fact that they don’t discuss the matter openly.

It’s a sensitive topic without a doubt, and Ford believes education on steroids is the only way to address the issue responsibly. Ford was ultimately left unsure if The Rock uses steroids, but he doesn’t deny that Johnson has one of the best physiques in Hollywood.