In Hunter Henderson's first foray into Strongman, she put on a fantastic performance. 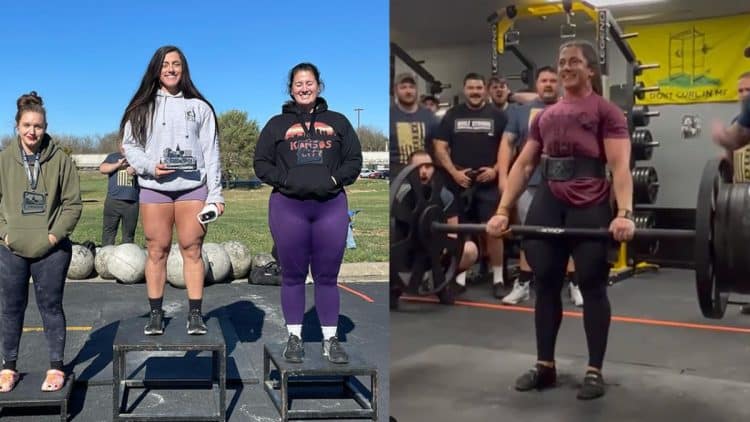 The majority of strength sports are interrelated in one way or another. In the sport of bodybuilding and powerlifting, competing in both disciplines is not uncommon. Johnnie Jackson, Ronnie Coleman, and Arnold Schwarzenegger all accomplished the feat in the past. One of the most notable cases of this in recent times has been with the elite powerlifter and bodybuilder Hunter Henderson, who decided to test her skills in the sport of Strongman. She took part in the 5th Annual Veterans Day Strongman Challenge 2022, which took place on November 5th, 2022.

This Strongman competition consisted of four events, with the first one being the Wagon Wheel Axle Bar Deadlift. Needless to say, being a powerlifter, Hunter crushed this event and locked out a 515-pound (233.6-kilogram) deadlift.

The second event was the Keg Press Overhead Press for reps, where Hunter Henderson managed to complete 13 repetitions with a 125-pound (56.7-kilogram) keg. She then moved on to the Dead Hang event and managed to hold on for 55 seconds.

Finally, experiencing the true Strongman culture, Hunter Henderson finished her performance with a 225-pound (102-kilogram) Atlas Stone Over Bar. She attempted to lift a 250-pound (113.4-kilogram) stone as well, but was unable to do so.

As can be seen in the last slide of the Instagram post above, Hunter Henderson won the Heavyweight division and stood atop the podium. In addition, this victory earned her a qualification for the next year’s Nationals.

“Today was so much fun! I competed in my first strongman comp… I was surrounded by family, coworkers, and friends. My heart is very happy.”

Hunter Henderson’s appearance in this Strongman competition came completely unannounced, as she has been sharing purely powerlifting and physique updates on her Instagram. However, Hunter has recently revealed that “No stages or platforms” are “in sight” for her. So, she does not intend to compete again anytime soon.

This is the third sport that Hunter Henderson has excelled in, having also accumulated major success in Powerlifting, but also in Bodybuilding. Most notably, Hunter earned her IFBB Pro Card at the 2021 NPC USA Championship in Women’s Bodybuilding. At the 2021 IFBB Tampa Pro, she placed second in her pro debut.

However, Hunter Henderson is primarily renowned for her Powerlifting resume, having won all eight sanctioned competitions in which she took part. Furthermore, Hunter has broken World Records on multiple occasions and she is just getting started.

Clearly, Hunter Henderson enjoys a good challenge, but what makes her one of the greatest athletes in the world is her tenacious commitment to success. As a result of her recent Strongman victory, she has demonstrated her versatility in all aspects of fitness that few have achieved.